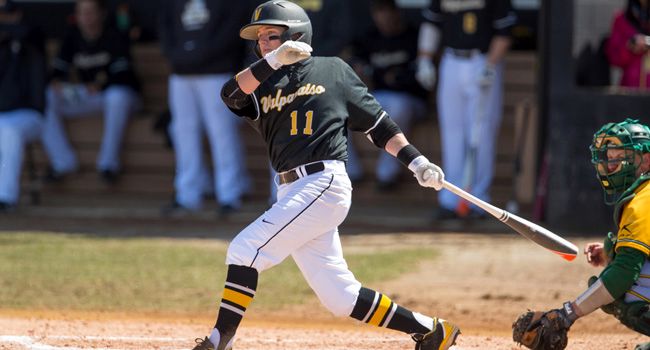 Jeff Edwards is second in the nation with 0.50 sacrifice hits per game. (Jon Hendricks)
Valparaiso at Northwestern | April 08, 2014

The last time the Crusaders faced a Big Ten team they were two outs away from pulling off the biggest upset in program history. Instead, a four-run ninth-inning rally by the 13th-ranked Indiana Hoosiers sent the sold out crowd at Bart Kaufman Field in Bloomington home happy. The Brown and Gold aim to turn the tables on Big Ten foe Northwestern in the first meeting between the two teams since 2011.

The Wildcats lead the all-time series 23-9, but the rivalry has been an even 6-6 split since 2000. The series began in 1946, the first season individual game records were kept at Valparaiso. The Valpo-Northwestern game was the fourth in school history, and the Wildcats took a 5-3 affair at home on April 26th. In fact, Northwestern won the first twelve contests of the series until the Paul Twenge-led Crusaders defeated the Wildcats 3-2 on May 2nd, 1995.

RHP Ellis Foreman (Round Rock, Texas/Stony Point) will make his fourth start of the season Tuesday. The redshirt freshman drew tough assignments in his last two outings - both versus Notre Dame. Foreman saw his ERA jump from 3.86 to 5.72 after a pair of starts against the Irish where he yielded eleven earned runs in twelve innings. On a positive note, the right-hander has issued more than one free pass only once in six appearances.

When pitching out of the stretch, opposing batters are hitting .456 (26-for-57) off Foreman as opposed to just .172 (10-for-58) when the bases are empty. He's induced a staff-leading four double play balls and has yet to allow a stolen base while on the bump.

The Crusaders have fared slightly better against lefties (.236) than they have versus right-handers (.215). Michael Morman (Rockford, Ill./Boylan Catholic) and Jake Hanson (Yorkville, Ill./Aurora Christian) have enjoyed success when facing a southpaw with .364 and .359 batting averages, respectively. Designated hitter Karch Kowalczyk (Peru, Ill./La Salle-Peru) is also north of the .300 mark against left-handers with a .318 average.

LHP Dan Tyson will get the start for the Purple and White. This will be Tyson's fifth start and tenth appearance overall. The senior from San Diego, California is two outs away from recording 120 innings for his career at Northwestern. Tyson is 6-11 lifetime with a 5.66 earned run average. Opponents are batting .286 off the southpaw this season, the first in which that number is below .317.

Freshman Matt Hopfner leads the Wildcat offense with a .340 average and a .381 on-base percentage. Joe Hoscheit is also enjoying a nice freshman campaign. The outfielder carries a .340 on-base percentage coupled with a .359 slugging mark thanks to seven extra-base hits. Hoscheit's name may ring a bell with some Crusader fans, as Joe's brother, Mike, was a Butler Bulldog from 2008-2012.

Paul Stevens is in his 26th year as the head coach of Northwestern. In addition to leading the Wildcats, he has served two stints with the United States National Team at the Pan American Games. A graduate of nearby Lewis University, Stevens won his 600th game during the 2012 slate. His son, Cody, is an infielder/outfielder for the Wildcats.