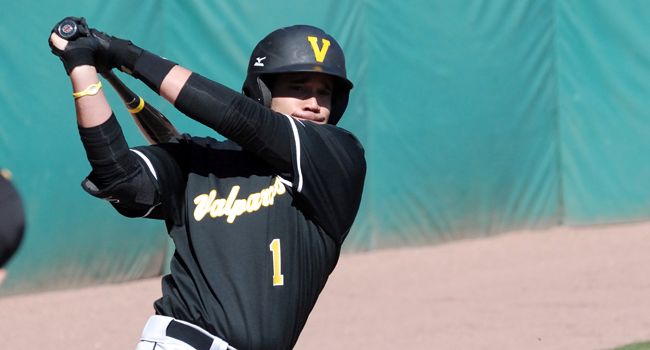 Mark Johnson (Evanston, Ill./Evanston Township) waited two and a half years for his first career home run. He waited about two hours for his second.

"When things are feeling well and everything seems to be going your way, you just roll with it," Johnson said.

The junior capped off a marvelous week at the plate with two home runs and four RBIs as part of a 6-for-8 doubleheader versus Youngstown State Saturday.

Valpo took game one by a score of 13-1 behind a spectacular start from Dalton Lundeen (Streamwood, Ill./Streamwood). Youngstown State turned the tide in game two of the twinbill with a 12-4 victory.

In game 1, the Crusaders scored runs in each inning but the second and seventh. Karch Kowalczyk (Peru, Ill./La Salle-Peru) hit his first double to the left-center gap in the first inning to score Spencer Mahoney (La Grange Park, Ill./Lyons Township). The designated hitter's ninth extra-base hit of the season tied the game after the Penguins plated an unearned run in their half of the first.

Michael Morman (Rockford, Ill./Boylan Catholic) gave the Brown and Gold a 2-1 lead later in the frame when he traded places with Kowalczyk via an opposite field double.

The Crusaders opened up their lead to 4-1 in the third. Mahoney touched home for the second time in the game on a Chris Manning (Lake Forest, Calif./El Toro) ground out to short. Kowalzcyk produced a carbon copy of his first inning double with a replica shot to the gap off YSU starter Patrick O'Brien. Jeff Edwards (Massillon, Ohio/Jackson), who had doubled earlier in the inning, raced home for the second tally of the inning.

As Valpo continued to put runs on the board, Lundeen settled in and gave Valpo quick inning after quick inning on the hill. At one point, the southpaw retired twelve in a row.

Kowalczyk singled home Edwards in the fifth to plate the sixth Valpo run. Manning scored in the next at-bat when Morman grounded into a 4-6-3 double play. The 7-1 Crusader advantage ballooned to 10-1 in the bottom of the sixth.

King went to 3-2 before Johnson lifted the payoff delivery high into deep right center field and over the fence for his first career home run, a three-run shot.

Not to be upstaged, Kowalczyk rifled a homer to dead center with Edwards and Johnson on base in the 8th. The long ball put the Crusaders ahead 13-1.

Zack Walsh (Batesville, Ind./Batesville [Connecticut]) came on in relief of Lundeen in the ninth. Lundeen's final line read: 8 IP, 4 H, 1 R, 0 ER, 1 BB, 9 K. The sophomore has not allowed an earned run in his last three appearances spanning 17 innings. He lowered his Horizon League-leading earned run average to a tidy 2.00.

Walsh worked a scoreless ninth to preserve the 13-1 win. Johnson finished the game a single away from the cycle.

The Penguin offense took its revenge out in a hurry in game two.

Valpo scratched back for one run in its half of the third when a Nic Manuppelli delivery eluded catcher Jake Ross, allowing Ray Bartolomucci (Concord, Calif./De La Salle) to scamper home.

Bartolomucci drove in the second Crusader run in the following frame when he hit a chopper to third that brought in Morman from third base. Youngstown led 9-2 after four innings.

The two clubs traded single tallies in the fifth.

The Penguins got into double digits in the run column in the top of the 7th when Phil Lipari stroked a first-pitch fastball out to right center.

Robert Switka came in in the 7th after Manuppelli logged six innings of three run ball.

Johnson welcomed Switka to the game when he clocked the first pitch deep into right center for his second round-tripper of the day.

Youngstown State held on for a 12-4 win as Manuppelli registered his first victory of the 2014 campaign.