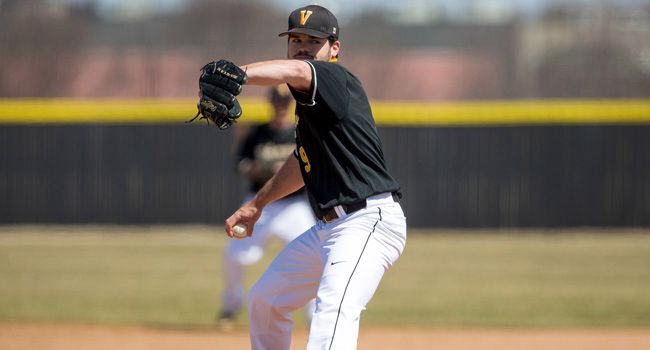 On Deck for Crusader Baseball: Valpo and Milwaukee meet for the first time since the semifinals of the 2013 Horizon League Conference Tournament in Niles, Ohio. The Crusaders chased UWM starter Cale Tassi before the righty could record the third out of the first inning. The Brown and Gold crossed the plate five times in the opening frame en route to a 6-4 victory. Valpo currently sits a game ahead of Milwaukee in the 2014 standings.

Last Time Out: Valpo took two of three from the visiting Youngstown State Penguins last weekend in a windy couple of days at Emory G. Bauer Field. Dalton Lundeen was named HL Pitcher of the Week for the third time this season after striking out nine Penguins, walking one, and allowing an unearned run over eight innings. Mark Johnson capped off an eye-popping week at the plate as the junior went 6-for-8 with two homers, a triple, double and four RBIs in the Saturday doubleheader. Johnson was named HL Player of the Week on Monday after batting .643 with a 2.000 OPS. On Tuesday, the outfielder was dubbed one of only five NCAA Players of the Week.

On the Air: There will be neither video nor radio for any of the three games, but live stats will be available for each tilt. The links are available at valpoathletics.com.

Probable Starters: Senior RHP Cole Webb (4-2, 4.05) will take the ball in the first of the three-game series for the Crusaders. LHP Dalton Lundeen (3-2, 2.00) will aim to dip his HL-leading ERA into the 1.00’s as he faces UWM for the second time in his career. Redshirt freshman right-hander Ellis Foreman (1-3, 7.04) will get the nod in the series finale on Saturday.

Series Notes: Milwaukee leads the all-time series 30-22 over Valpo, a rivalry that has drawn much closer in recent years. Overall, Valparaiso is 11-3 in its previous 14 contests versus the Panthers. This will be the Crusaders’ first trip to Brew City since April of 2012, when they swept UWM. The three-game series that was scheduled to be played in Milwaukee last season was moved to UIC because of unplayable conditions at Henry Aaron Field.

Scouting the Opposition: Milwaukee owns a 10-15 overall record entering their game Wednesday against the Milwaukee School of Engineering. The injury bug bit the defending HL regular season champs early on in the year as Luke Meeteer and Sam Koenig have been sidelined for the past 15+ games. Henry Aaron Field has been a dead-end for visiting teams as the Panthers have won 18 straight at home dating back to the 2012 season. In fact, Valpo is the last Horizon League team to score a W at the Hank (4/29/12).

Through Tuesday, the Panthers accumulated a healthy .274 team batting average. Their multi-faceted offense can beat teams with speed (31 stolen bases, T-1st in HL), power (12 home runs, 3rd in HL) or the sac fly (15, T-1st in HL). Ryan Solberg has picked up the slack while Meeteer and Koenig have been out. The senior leads the UWM offense in the majority of offensive categories including batting average (.311), homers (4), and RBIs (18). Solberg also is a nuisance on the basepaths (9-9 SBs). Mitch Ghelfi, a freshman All-American last year, is right on Solberg’s heels. The backstop is batting .305 with a .406 OBP. Ghelfi has been a rock behind the plate, having thrown out 18 of 40 (45%) potential base stealers.

None of the starters from the 2013 weekend rotation are back for Milwaukee. Jake Long and Cale Tassi both graduated and senior Mike Schneider hasn’t thrown a pitch. Brian Keller has filled in admirably in the Friday role. The sophomore’s W-L record is misleading (0-3) as his 3.73 ERA and 2.1:1 K-BB ratio are more indicative of his work. Lefty hitters are batting just .194 against him. Cody Peterson has received the ball the past couple of Saturdays. The righty leads the team in victories with three, but Peterson has yielded a team-high 14 extra-base hits and carries a 5.50 earned run average. Lefty Justin Langley will most likely take the hill on Saturday. Right-handed batters are hitting .345 off the southpaw.

In the Dugout: Scott Doffek is in his 8th season as head coach at Milwaukee. He played collegiately at Waukesha County Community College, before spending five seasons in the Los Angeles Dodgers minor league system. Doffek is a two-time Horizon League Coach of the Year, most recently in 2013.

Et Cetera: Bryce Hara reached base at a .387 clip in seven games against Milwaukee last season ...Karch Kowalczyk gave up his only earned run of the regular season last year against the Panthers on May 4th. The Crusader closer also recorded three of his Horizon League-high 12 saves versus UWM. Kyle Schneider was 4-for-8 with three doubles and three runs against the Panthers in 2013...opponents are batting .212 (14-66) against Ellis Foreman when the bases are empty, but teams are hitting .481 (37-77) off him when he works out of the stretch. Right-handed batters have just one hit in 24 at-bats against Panther reliever Tell Taylor.