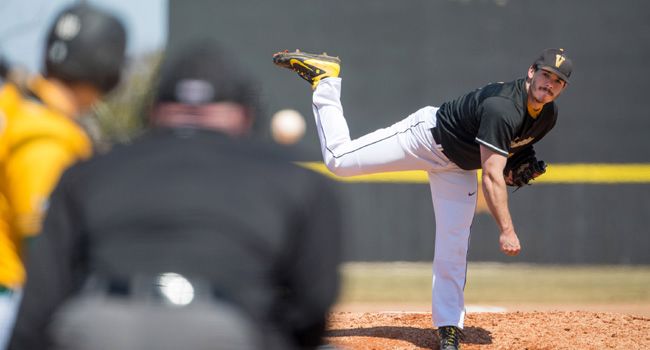 With closer Karch Kowalczyk (Peru, Ill./La Salle-Peru) on the shelf Thursday, head coach Brian Schmack was hoping to get seven innings out of starting pitcher Cole Webb (Tulsa, Okla./Union [Coffeyville CC]) in the series opener against Milwaukee. He got nine from the senior in a two-hit shutout of the Panthers at Henry Aaron Field in Wisconsin.

"It's a great way to start the series. Cole threw with conviction and the defense played well behind him," Schmack said.

In a diversion from his start last Friday against Youngstown State, Webb was hyper-efficient versus the defending regular season champs, needing more than 15 pitches in any one frame just once. He punched out eight batters - his most in a Crusader uniform - and walked just one.

Webb worked around a one-out single from Michael Porcaro in the bottom half of the first. Milwaukee (11-16, 4-6 Horizon) received its only other hit of the afternoon an inning later when Tyler Hermann deposited an opposite-field knock into right field. The base-hit moved Ryan Solberg up to third base, where he was eventually stranded. Solberg represented the only Panther to advance past first base all game.

From the third out of the second inning to the final out of the tilt, a Porcaro hit-by-pitch was Webb's only blemish. The plunked batter was sandwiched between two streaks of eleven consecutive batters retired.

The offense gave Webb some breathing room in the fifth. Mark Johnson (Evanston, Ill./Evanston Township) singled through the right side before stealing second, moving him into scoring position for Mahoney. Mahoney nearly had his second opposite-field extra-base hit but Hammer made a nice running catch against the wall for the second out of the inning. Jeff Edwards (Massillon, Ohio/Jackson) followed with a grounder up the middle that Tell Taylor was able to smother with a diving stop to his left. Meanwhile, Johnson hustled around third base to beat the throw home from Taylor.

Seeking further insurance, the first three Crusaders reached against Keller in the top of the eighth. Milwaukee skipper Scott Doffek called on left-hander Tyler Thicke in the bases-loaded, nobody out situation. Bryce Hara (Irvine, Calif./Northwood [Irvine Valley College]) fouled the first pitch off from the reliever. After he received the sign for the next pitch from catcher Mitch Ghelfi, Thicke dropped the ball, forcing in Andy Burns (Edwardsville, Ill./Edwardsville [Heartland CC]) on the balk.

Thicke retired the next two batters in order, but Morman made it 4-0 when he scored from third on a passed ball.

Webb (5-2) retired the heart of the Milwaukee order in the ninth to seal his first shutout as a Crusader. Thursday marked the first time he blanked a team since his Valpo debut on Feb. 16th, 2013 in Nashville. In that contest, Webb surrendered just one hit in eight scoreless innings.

The victory brought an end to the Panthers' 20-game home winning streak.

Valpo (14-16, 6-4 Horizon) moves two games up on Milwaukee in the standings with the victory. Sophomore Dalton Lundeen (3-2, 2.00) looks to clinch the Brown and Gold's third straight series win Friday at 3:00 pm CT. Milwaukee will counter with RHP Cody Peterson (3-1, 5.50). Links to the live stats are up at valpoathletics.com.