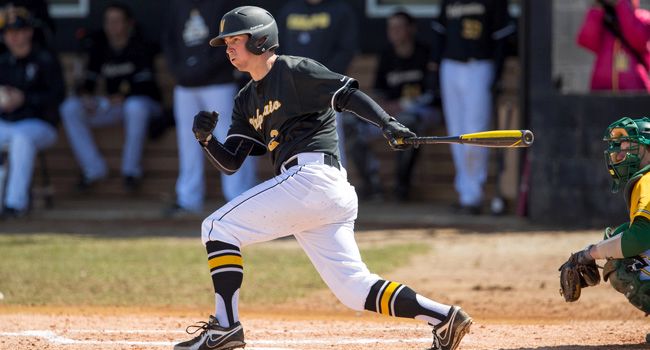 For at least a day, the Crusader offense revived itself to the tune of eleven hits in a 10-3 win over Kalazamoo College at Emory G. Bauer Field.

"It was good to see us have some success at the plate. We did a nice job of hitting some gaps there in the middle innings," head coach Brian Schmack said.

Manning brought the first Crusader run in the third inning with a ground-rule double to right center. The two-bagger allowed Spencer Mahoney (La Grange Park, Ill./Lyons Township) to trot in from second.

Valpo put up its first multi-run frame in 22 innings in the fourth.

With two away, Johnson drove a Ty Rock delivery into the right center gap that scored Yoder all the way from first. After a walk and hit-by-pitch, Manning knocked a two-run single to left. Kowalczyk made it 5-0 in the next at-bat with a carbon-copy base hit to left field.

Yoder led off the bottom of the fifth with a gapper to right center. As Bryce Hara (Irvine, Calif./Northwood [Irvine Valley College]) was walking to the plate, a roar of thunder prompted the teams to dismiss the field.

Following the rain delay, Hara drew a walk before Ray Bartolomucci (Concord, Calif./De La Salle) reached on an error at shortstop to load the bases. Johnson subsequently rifled a 1-1 pitch into right that plated Yoder and Hara.

Manning collected his third RBI with a sacrifice fly to right field to make it 8-0. Kowalczyk provided the exclamation point via a two-run double to right center.

Kalamazoo (13-16) added single tallies in the sixth, eighth, and ninth frames. The Hornets were unable to get on the board versus Hasler, who racked up nine ground ball outs in five innings. He walked three and allowed three hits but also coaxed two double plays.