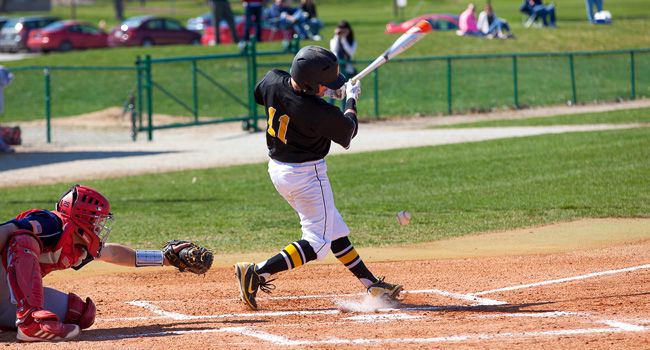 The Crusaders were limited to just one run and six hits in their 10-1 series-opening loss to UIC on Friday at Emory G. Bauer Field. Tomas Michelson went the distance for the Flames. The junior stymied the Valpo offense until the ninth inning as Michelson threw 101 pitches in his first complete game of the season.

UIC's Alex Jurich broke a scoreless tie with a two-run triple to right center in the top of the third.

The Flames blew the game wide open in the fourth with a seven-run frame. Mickey McDonald emptied the bases with a grand slam to right field on the first pitch of the at-bat from Cole Webb (Tulsa, Okla./Union [Coffeyville CC]). Things spiraled for Webb and the Crusaders four batters later when Tyler Detmer plated two with a double to left-center field. Outfielder Conor Philbin made it 9-0 thanks to a double he sliced inside the third base line.

Valpo stranded more than one base runner just once all afternoon. After Michelson retired the first two in order in the sixth, Jeff Edwards (Massillon, Ohio/Jackson) drew a four-pitch walk. Chris Manning (Lake Forest, Calif./El Toro) beat out an infield single in the next Valpo at-bat to put two runners on for Karch Kowalczyk (Peru, Ill./La Salle-Peru). But the Crusader designated hitter just got under a 3-1 delivery from Michelson as he flew out to center to end the inning.

The Brown and Gold were able to engineer a run in the ninth.

Called on to pinch hit, Grant Yoder (Fort Wayne, Ind./Snider) snuck a double inside the first base bag to lead off the frame. Nate Palace (Westlake Village, Calif./Oaks Christian) followed with a pinch-hit single of his own to right field to put runners on the corners with no outs. Yoder came in to score in the next at-bat as pinch-hitter Emerson Misch (Bloomfield Hills, Mich./Andover [IMG Academy]) grounded into a 4-6-3 double play.

Michelson got Andy Burns (Edwardsville, Ill./Edwardsville [Heartland CC]) down on strikes for the final out of the game as the right-hander earned his fifth win of the year.