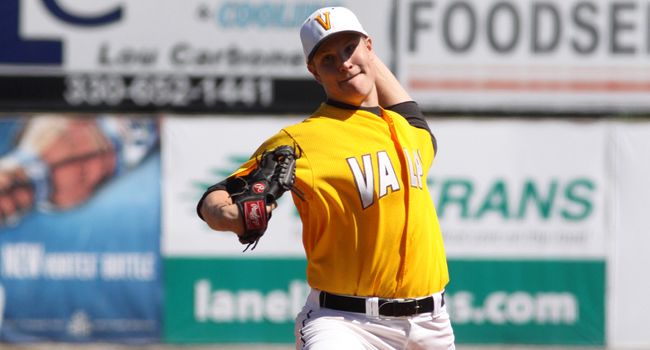 For the second straight day, the Crusader offense pushed a run across in the ninth after being flummoxed by a UIC starter for eight innings. On Saturday it was Ian Lewandowski's turn to take a shutout bid into the final inning, one game after Tomas Michelson tossed the first complete game of the season for the Flames.

Dalton Lundeen (Streamwood, Ill./Streamwood) kept Valpo in the game as the sophomore matched Lewandowski zero for zero until the sixth.

After both Jacob McNamara and Alex Lee reached via single, first baseman Jeff Boehm went the other way for an RBI base hit. Catcher Alex Jurich gave the Flames a 2-0 lead in the next at-bat with a double down the left field line. With runners on second and third and one out, Lundeen hunkered down to coax a shallow fly ball to right before getting Conor Philbin down on strikes to avoid further damage.

Jurich was a thorn in the side of the Brown and Gold again in the eighth when his one-out single off reliever Ben Mahar (Mundelein, Ill./Mundelein) plated Lee for a 3-0 score.

UIC added two insurance tallies in its half of the ninth to make it 5-0.

Flame skipper Mike Dee called on Mitchell Schulewitz as the run-scoring single created a save situation with two runners on and one out. Bryce Hara (Irvine, Calif./Northwood [Irvine Valley College]) welcomed the sidewinder with a base hit through the right side to load the bases.

Nate Palace (Westlake Village, Calif./Oaks Christian) represented the tying run but Schulewitz cajoled the third double play ball off the bat of a Crusader to end the game.