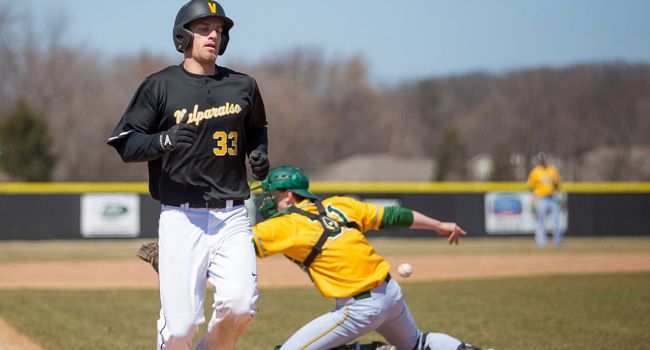 Valpo's offense has solved its problem of getting runners on base. Scoring said runners now presents a new challenge.

The Crusaders left eleven men on base as Western Michigan defeated them 3-2 at Emory G. Bauer Field Tuesday. Including Sunday's 6-3 loss to UIC, the Brown and Gold have now stranded 20 base runners in its last two games.

Redshirt sophomore Michael Morman (Rockford, Ill./Boylan Catholic) blasted a Nick Bradley fastball deep over the left field fence in the first inning to give Valpo a 2-0 lead. Senior Bryce Hara (Irvine, Calif./Northwood [Irvine Valley College]), who reached base via a walk, scored on Morman's first homer since May 3rd, 2011.

The contest appeared to be headed for a slugfest as Western Michigan responded with three runs in its half of the second. The first two Broncos reached before Hunter Prince delivered an RBI double to right center. Steve Buglione tied the game at 2-2 in the next at-bat when he drove in catcher Caleb Caton with a ground out to shortstop Spencer Mahoney (La Grange Park, Ill./Lyons Township). Western Michigan plated what turned out to be the game-winning run on a suicide squeeze off the bat of Vinnie Booker.

Freshman Mario Losi (Anaheim, Calif./Canyon) made his first appearance on the hill since suffering a hamstring injury in an April 6th start against Wright State. The right-hander fired seven innings, allowing just the three runs WMU scratched across in the second. Losi surrendered four hits, walked two and struck out a batter.

Valpo's best opportunity presented itself in the bottom of the sixth. Mark Johnson (Evanston, Ill./Evanston Township) drew a two-out walk to load the bases versus left-hander Derek Schneider, but Schneider escaped damage by coaxing a fly out from Mahoney.

David Brennan came on in the second and supplied 3 2/3 innings of scoreless relief of Bradley. Brennan was rewarded with his first victory of 2014. Gabe Berman worked around a leadoff walk to earn his sixth save of the season.