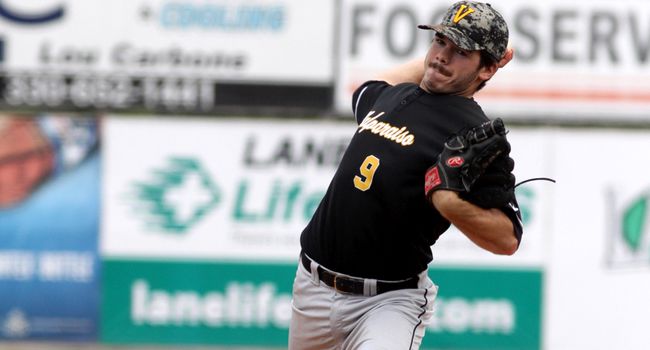 On Deck for Crusader Baseball: Saturday’s Senior Day highlights the final weekend of the season at Emory G. Bauer Field. After Sunday afternoon’s tilt versus the Golden Grizzlies, the Crusaders will pay their final seven regular season games outside the state of Indiana. Oakland comes to town on a six-game skid, so the opportunity exists for Valpo to gain ground on third-place Milwaukee (8-7 Horizon), who travels to UIC (12-9 Horizon) for a three game series.

Last Time Out: The Crusader offense plated a single tally in just five frames the entire series versus UIC last weekend as the Flames moved three games up on Valpo in the Horizon League standings. Both Tomas Michelson and Ian Lewandowski took shutout bids into the ninth inning of Friday and Saturday’s games respectively. Cole Webb saw his ERA jump from 3.40 to 4.53 in the opening game after the Flames tagged him for nine runs in four innings. Dalton Lundeen continued an All-Horizon League worthy season on the mound as the sophomore allowed just two runs in seven strong innings. Unfortunately, he received just one run of offensive support in the 5-1 loss. UIC won the series finale 6-3 thanks to its bullpen logging 6 2/3 innings of earned run-free ball.

On the Air: WVUR (95.1 FM, Valparaiso) will broadcast all three games live this weekend, with Brandon Vickrey on play-by-play for the entire series. Live stats links are also available at valpoathletics.com.

Probable Starters: Senior RHP Cole Webb (5-3, 4.53) will take the ball in the first of the three-game series for the Crusaders. LHP Dalton Lundeen (3-4, 2.29) will shoot for his fourth win of the season on Saturday. Freshman RHP Ellis Foreman (1-6, 7.16) will make his eighth start Sunday in the home finale.

Series Notes: Valpo leads the all-time series 19-15 over Oakland in a rivalry that started in 1999. The Crusaders and Golden Grizzlies met 30 times from 2000-2007 while both teams resided in the Mid-Continent Conference. Oakland is 9-11 all-time versus the Brown and Gold at Emory G. Bauer Field. The last time the two teams met in Valpo was on April 23rd, 2006.

Scouting the Opposition: Oakland owns a 7-26 overall record in its first season in the Horizon League. The Golden Grizzlies have won one conference game away from Rochester: a 4-1 victory over Youngstown State at Eastwood Field on April 18th. Oakland sits two games back of the Penguins in the standings entering this weekend. Weather has allowed the Grizz to play just seven of their 33 games at OU Baseball Field, a park where they went 16-2 as recently as two seasons ago. Opposing base runners have been successful on 71 of 86 attempts versus Oakland (82.6%). The Golden Grizzlies have committed 24 more errors than their opponents (66).

The Golden Grizzlies come into Friday as a middle-of-the-pack team offensively. Their .265 batting average is fourth in the Horizon League, while their .360 on-base percentage is third. Outfielder Robby Enslen paces the Oakland offense with a .333 batting average, eleven extra-base hits, and 27 runs batted in. The Grizz have hit only five home runs as a team in 2014, but shortstop Mike Brosseau has two of them. The sophomore has also scored 21 runs and added eight doubles to his stat sheet. Center fielder Jared Theisen has started all 33 games for Oakland and registered a team-high two triples. Trent Drumheller is batting just .250 on the year but the junior has drawn a team-leading 23 walks to go with his 12 stolen bases.

Oakland’s pitching has amassed a 6.58 earned run average, but its weekend starters have combined to tally a 4.18 mark. Jason Hager has gotten the ball on Fridays for the Golden Grizzlies. The lefty has won just one of his eight starts while averaging over six innings per start. Tim Koons, the Saturday starter, possesses the only complete game on the Oakland staff. The senior has struck out a team-high 48 batters in 45 1/3 innings. Jake Paulson has put together the best season on the mound of any Oakland hurler. The 6’7’’ redshirt junior sports a 2.94 ERA and has surrendered 48 hits in 49 innings.

In the Dugout: John Musachio is in his 6th season as head coach of the Golden Grizzlies. A Bradley University alum, Musachio spent time as an assistant at Michigan State during the 2005 season. He is 131-221 at the helm of Oakland.

Et Cetera: Dalton Lundeen is 58th in the nation in walks allowed per nine innings (1.41)...OU’s Mike Brosseau is the 40th toughest player to strike out in all of Division I (1 K per 15.3 at bats)...Oakland has been outscored 52-4 in the fifth innings of games this season and 78-31 in the first two frames...The Crusaders batted .223 in the month of April and the pitchers compiled a 4.53 earned run average...The Golden Grizzlies have yet to win a game this year when trailing after six innings (0-19)...Valpo’s starting pitchers factored into the decision in all but two contests in the month of April (17 of 19 games).