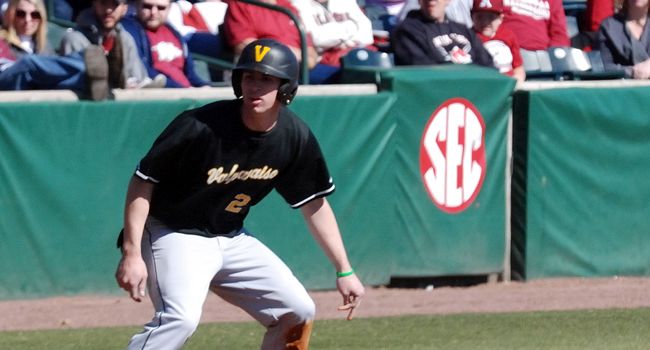 Chris Manning had a 3-for-3 day at the plate with two runs and a pair of walks. With the two runs scored, he became Valpo's all-time leader in runs scored.
Valparaiso at Western Michigan | May 07, 2014
Related Links
Related Links

Chris Manning (Lake Forest, Calif./El Toro) added another chapter to his productive and consistent legacy Wednesday as he became Valpo's all-time leader in runs scored in an 8-4 win over Western Michigan at Homer Stryker Field in Kalamazoo.

For Manning, it represented his 158th career run, tying him for most all-time in school history alongside former Crusaders Mark Pedersen and Michael Arensdorff.

Armed with a three-run lead for the first time in two months, freshman Mario Losi (Anaheim, Calif./Canyon) tossed up zeroes in the next three frames.

Bartolomucci gave the right-hander an insurance tally thanks to a sacrifice fly in the top of the sixth. The catcher's third RBI of the season made it 4-0.

The Broncos sliced the deficit in half in the sixth. Western Michigan got its first run on an infield error before catcher Caleb Caton lifted a sac fly to bring the score to 4-2.

Valpo delivered the backbreaker in a three-run top of the seventh, the inning where Manning broke the career watermark.

After improving to 3-for-3 on the day with a single up the middle, Manning advanced to second on a line drive base hit to left off the bat of Morman. Karch Kowalczyk (Peru, Ill./La Salle-Peru) followed with a single to right-center that brought in Manning, giving the senior the record.

Valpo added another run in the eighth after Morman peppered the right-center field wall for his second double of the afternoon.

He finished the day 3-for-4 with two doubles and four runs batted in. His average climbed to .301 as a result.

Ben Mahar (Mundelein, Ill./Mundelein) threw the ninth in the 8-4 victory, Valpo's first in Kalamazoo since May 5th, 2004.

The Crusaders entered Wednesday's game with a 3-18 all-time record on the road versus Western Michigan. Two of those wins came on one day (5/20/77) in the Emory G. Bauer Era.

Valpo (19-24) will head to Dayton this weekend for a three-game series against the Horizon League regular season champion Wright State Raiders (28-18, 21-2) beginning Friday. Links to the live stats are available at valpoathletics.com.