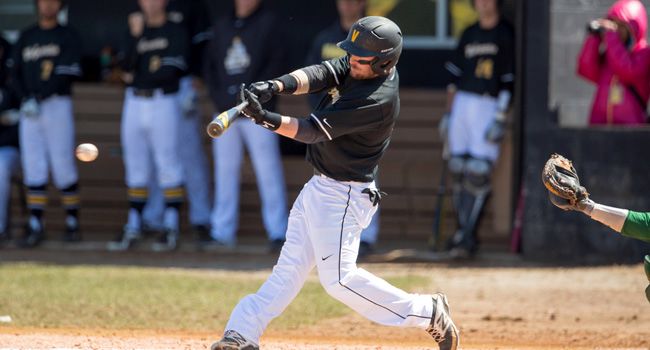 "He [Cole] did a great job attacking the zone and dictating the pace today. And any time your offense can put up three crooked numbers on the road, it's a great day," head coach Brian Schmack said.

Spencer Mahoney (La Grange Park, Ill./Lyons Township) broke a scoreless tie in the third when he sent an opposite-field double off the top of the wall, scoring Andy Burns (Edwardsville, Ill./Edwardsville [Heartland CC]) from second base. Burns kept the inning alive with a heads-up base running read in the prior at-bat. Mark Johnson (Evanston, Ill./Evanston Township) had ripped a first-pitch fastball from Joey Hoelzel right at shortstop Joe Ford, but Burns' first step was back to the bag, avoiding a potential inning-ending double play.

Valpo continued to work on Hoelzel in the fourth. The right-hander entered the frame having expended 37 pitches in the first three innings. The Brown and Gold tacked on two runs in a 42-pitch boondoggle.

Chris Manning (Lake Forest, Calif./El Toro) led things off with a single to center that capped off a nine-pitch plate appearance. With Michael Morman (Rockford, Ill./Boylan Catholic) at the plate, Manning swiped second base which moved him into a tie with Rob Hadrick for the second-most stolen bases in a career (56). Morman later singled, creating a runners-on-the-corners situation. Karch Kowalczyk (Peru, Ill./La Salle-Peru) was at the dish when Hoelzel executed a fake-to-third, throw-to-first pickoff attempt. Morman took off for second and got into a rundown as Manning successfully stole home, thrusting Manning all alone into second place on the career list.

Burns made it 3-0 later in the inning when he drove Morman in on a groundout to shortstop.

The Crusaders extended their lead to 5-0 in the fifth following a Kowalczyk RBI double and a run-scoring single from Burns.

Despite two elongated breaks between the fourth and fifth innings, Webb responded both times by facing the minimum. The senior enjoyed a stretch of eleven first-pitch strikes from the third to the seventh.

Wright State finally cracked Webb in the seventh when Andrew McCafferty plugged the right-center field gap with a triple. He later scored on a Kieston Greene sacrifice fly.

Any prospect of a Raider comeback was squashed in the top of the eighth when Valpo put up a five-spot on the scoreboard.

Trevor Haas (Mt. Prospect, Ill./Hersey) worked an uneventful ninth as the sophomore lowered his ERA to 3.69.

Webb threw eight innings and allowed one run on five hits. He struck out seven batters and didn't issue a walk. His earned run average fell to 4.15.

The Crusaders and Raiders continue their series tomorrow at Nischwitz Stadium. Dalton Lundeen (3-5, 2.10) will get the start in a 2:30 pm ET/1:30 pm CT first pitch. Links to the live stats are available at valpoathletics.com.