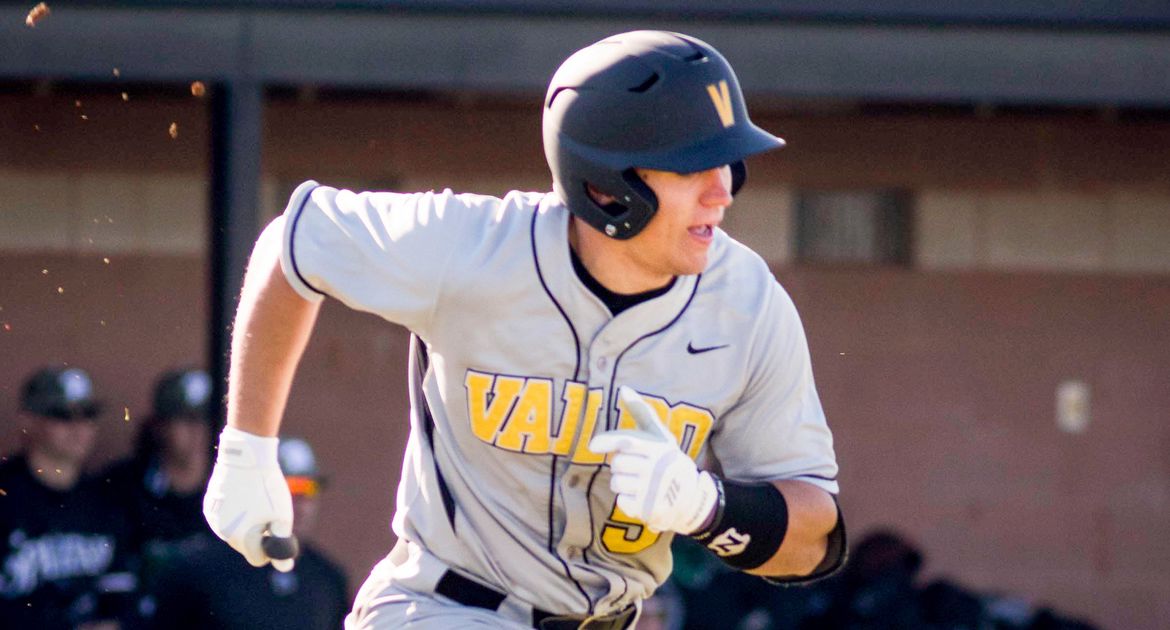 Daniel Delaney raised his average to .306 after his 4-for-5 day at Emory G. Bauer Field on Saturday. (Les Duggins)
Valparaiso at Youngstown State | March 21, 2015

Palace put the Crusaders on the scoreboard in the first with a triple down the right-field line that had Lodden sprint his way home from first. Lodden reached via a one-out walk. Delaney, the next batter, hooked a double inside the left-field chalk to put Valpo ahead 2-0.

Delaney notched his second RBI in as many innings in the following frame without lifting the bat off his shoulders. He drew a four-pitch walk from YSU starter D.J. Carr that allowed Jeff Edwards (Massillon, Ohio/Jackson) to stroll home from third. The Crusader second baseman opened the inning with a single to left.

The Penguins manufactured a four-run side to chase Fritze in the third, however.

It all started with a four-pitch, leadoff walk. Youngstown State center fielder Frank Califano sent a chopper along the third-base line that skipped through Shea Molitor (Plymouth, Minn./West Lutheran [Des Moines Area CC])'s legs and into left. With runners on second and first, Jason Shirley laid down a sacrifice bunt that resulted in a throwing error. With the bases loaded and nobody out, Fritze settled down and recorded a pair of strikeouts. It appeared as though the junior was going to work his way out of the jam, but Shane Willoughby and Jonny Miller smacked back-to-back two-run singles to put the Penguins ahead 4-3.

Freshman Connor Kaucic (Chardon, Ohio/Notre Dame Cathedral Latin) came on in relief of Fritze. The lefty coaxed an inning-ending ground out to avoid any further damage.

Shirley made it a 5-3 game in the fourth with a sac fly into foul territory in left.

Clark and Molitor stroked consecutive singles to open the fifth. Similar to the play in the YSU half of the fourth, Edwards laid down a bunt that the third baseman threw away. Clark was able to score from second on the miscue.

Spencer Mahoney (La Grange Park, Ill./Lyons Township) tied the game at 5-5 with an RBI ground out to short. Lodden prolonged the inning after he provided a clutch, opposite-field, two-out single to score Edwards.

It remained a one-run game until the Valpo half of the seventh. Back-to-back walks to freshman Giovanni Garbella (San Diego, Calif./Cathedral Catholic) and Mahoney came back to harm Penguin reliever Anthony Konders. With YSU skipper Steve Gillispie anticipating a bunt, Lodden smacked an RBI double through the wheel play.

Palace extended the Crusader lead to 9-5 when he greeted Youngstown State's fourth reliever, Ryan Krokos, with a two-run single between shortstop and third base. Five batters later, Krokos hit Edwards with the bases loaded to force in the 10th run.

The Penguins assembled a valiant comeback in the bottom of the seventh. Three walks and a single brought Bryce Yoder (Spencerville, Ind./Eastside) into a 10-6 ballgame with the bases loaded and two outs.

Designated hitter Josh Fitch sent a 1-1 delivery down the line that snuck between Molitor and the third base coach, bringing in two runs and creating a 10-8 tilt. With the tying runs in scoring position, Yoder caught pinch-hitter Joe King looking for the final out of the inning. The strikeout kept it a two-run game.

The junior sat down six of the next seven batters he faced to secure the 10-8 win. He earned his second save in the process. Kaucic was awarded the win, his first collegiate victory.