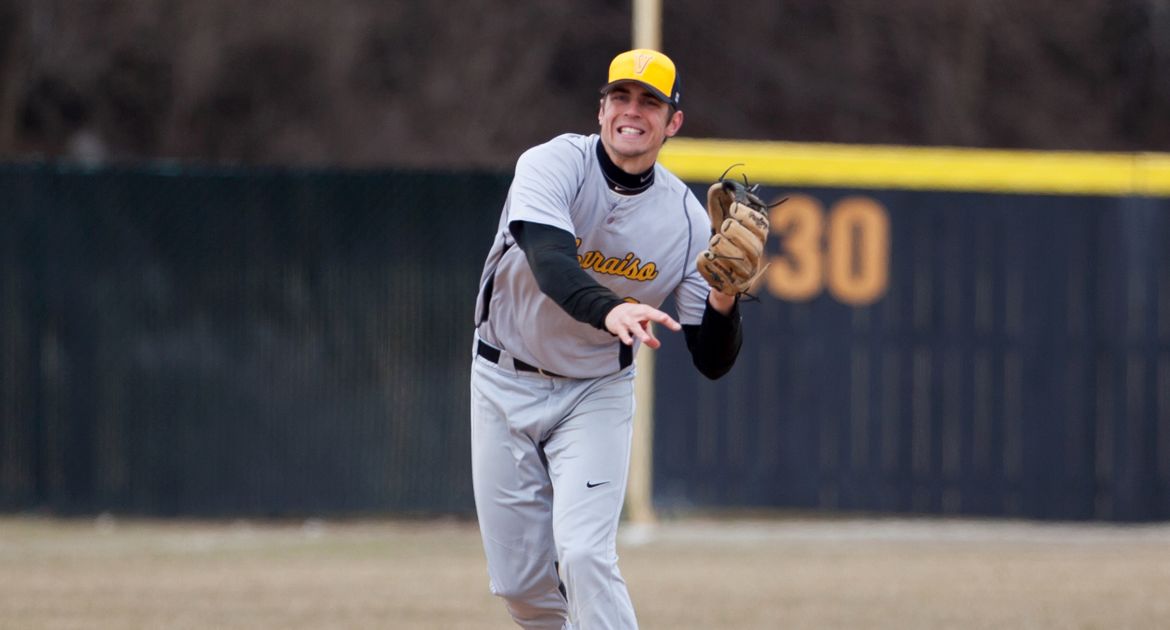 Senior Spencer Mahoney raised his batting average over the .300 mark after a 3-for-4 day with three runs batted in. (Avery Davis)
Valparaiso at Chicago State | March 25, 2015

Spencer Mahoney (La Grange Park, Ill./Lyons Township) and Mark Johnson (Evanston, Ill./Evanston Township) led a 14-hit day at the plate while Ellis Foreman (Round Rock, Texas/Stony Point) kept the Cougars off the scoreboard until the seventh inning of Valpo's 7-2 victory over Chicago State Wednesday afternoon in the Windy City.

Just as they did in last season's meeting at Cougar Stadium, the Crusaders got out to a 4-0 lead after four innings.

Mahoney clobbered the first pitch of the game from Zach Thomas to the right-center field gap. The shortstop raced into third base for a leadoff triple. Nolan Lodden (West Des Moines, Iowa/West Des Moines Valley [Heartland CC]) drove in his 17th run of the season in the next at-bat with a sacrifice fly to left.

Dustin Beasley (Round Rock, Texas/Stony Point [Cisco]) expanded the first-inning lead to 2-0 when he singled home Nate Palace (Westlake Village, Calif./Oaks Christian). Palace maintained his rabid slugging percentage with a one-out double down the left-field line. The sophomore is second in the nation in doubles per game with 0.67.

Johnson single-handedly set up Valpo's next run in the second frame. The senior legged out an infield single with two outs before advancing into scoring position with his third stolen base of the season. Mahoney drove Johnson in with an RBI knock to center.

Mahoney continued to be a thorn in the side of Chicago State pitching in the fourth. With a triple and single already under his belt, he split the left and center fielders with an RBI double that plated Jeff Edwards (Massillon, Ohio/Jackson). Edwards had reached safely with a single on the first pitch he saw from reliever Ean McNeal.

Foreman didn't allow the defense behind him to get too comfortable. After working around one hit in each of the first three frames, he sat down 11 straight Cougar batters in the middle innings. The right-hander needed just 60 pitches to navigate through six IP.

Daniel Delaney (Thousand Oaks, Calif./Thousand Oaks [Fresno State]) opened the seventh with an infield single. He came around to score after Beasley peppered the left-field wall with a Jerry Silva fastball. Beasley touched home later in the evening on a Shea Molitor (Plymouth, Minn./West Lutheran [Des Moines Area CC]) base hit to center.

The Cougars were able to make some headway on Foreman in their half of the seventh. The first three batters reached which led to head coach Brian Schmack beckoning Luke VanLanen (Pulaski, Wis./Pulaski) into the game. With a run having already crossed the plate, VanLanen allowed just one inherited runner to score, stranding the other.

Up 6-2, Valpo gave VanLanen some breathing room with an insurance tally in the ninth. Mahoney accumulated his third RBI with sac fly, scoring Molitor, who recorded a leadoff single.

VanLanen summoned three groundball outs in the bottom half of the inning to preserve the 7-2 win.

Foreman improved to 2-1 on the season. The redshirt-sophomore lowered his ERA to 3.63. Wednesday represented the first time in 2015 that the pitching staff did not allow a walk. Foreman struck out two while VanLanen punched out one.

Valpo (8-12, 4-2 Horizon) extended its winning streak to four games ahead of a pivotal three-game set with Wright State (17-6, 6-0 Horizon) this weekend. Stay tuned to ValpoAthletics.com for any adjustments to the series.