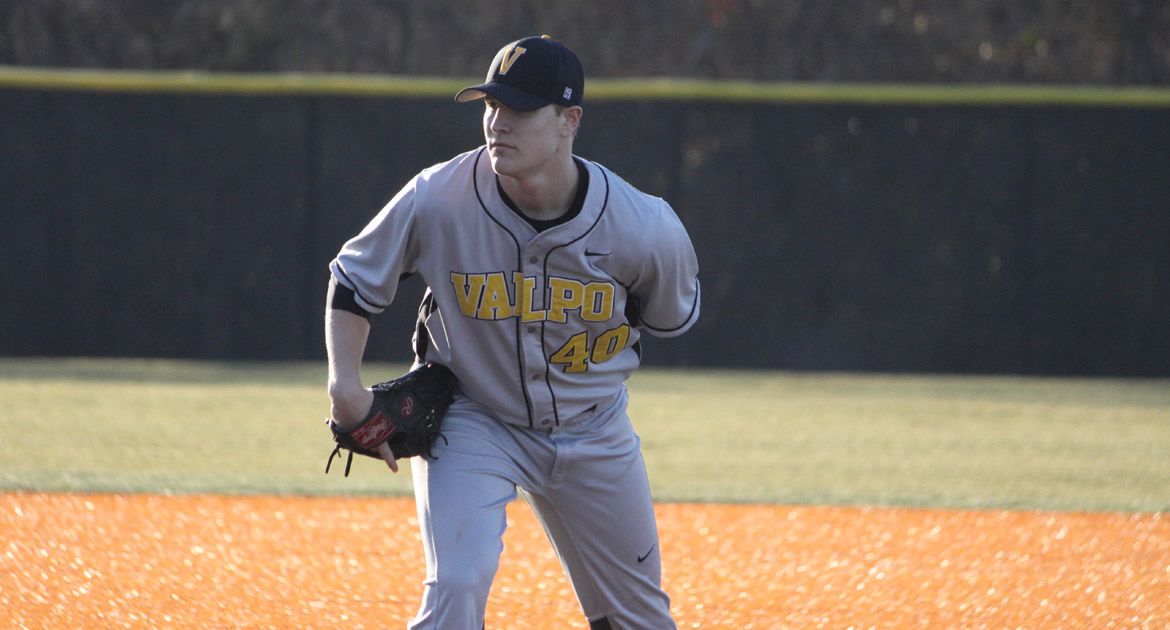 Dalton Lundeen (Streamwood, Ill./Streamwood) turned in a daring, 136-pitch complete game effort to lead Valpo to a 9-3 win over the visiting Golden Grizzlies Friday afternoon at Emory G. Bauer Field. Only one of the junior's three runs allowed were earned as he punched out ten batters for his second straight double-digit strikeout performance.

Nate Palace (Westlake Village, Calif./Oaks Christian) sent his sixth home run over the right-field wall and nearly recorded his seventh were it not for Grizzly outfielder Robby Enslen's eighth-inning act of larceny that turned a three-run jack into a dramatic sacrifice fly.

A complete game was most likely the last thing on Lundeen's mind after a two-run top of the first.

The first two batters of the game reached via error and a hit-by-pitch before Ian Yetsko drove both in with a two-out, opposite-field single. Both runs that came across to score were unearned.

The Crusaders got one run back in their half of the first. Spencer Mahoney (La Grange Park, Ill./Lyons Township) smoked the first pitch Jason Hager threw to deep center for a leadoff double. He scored from second base on a Nolan Lodden (West Des Moines, Iowa/West Des Moines Valley [Heartland CC]) scorcher past the shortstop and into left-center. Hager buckled down to strand Lodden in scoring position.

Lundeen faced the minimum in the second and third while his offensive counterparts registered single tallies to take a 3-2 lead.

Mark Johnson (Evanston, Ill./Evanston Township) roped the first offering he saw from Hager to deep right field that went in and out of the glove of Tyler Pagano. Ray Bartolomucci (Concord, Calif./De La Salle), who reached base with a one-out single, sprinted from first and used a clever hook-slide at home to elude the tag and tie the game.

Palace broke the 2-2 tie in the bottom of the third with an opposite-field solo homer. The round-tripper was the sophomore's sixth of the year, moving him one behind Milwaukee's Sam Koenig for the Horizon League lead.

Yetsko touched up Lundeen for another run-scoring hit in the fourth, this one a bases-empty blast to right to tie it up, 3-3.

Valpo seized its final lead and pulled away in the bottom of the fifth, a frame in which all of the home team's damage was sustained with two outs.

With two away, Lodden took first base on a close 3-2 pitch. Hager subsequently hit Palace with a 1-1 delivery. Things continued to unravel for the senior following a four-pitch walk to Shea Molitor (Plymouth, Minn./West Lutheran [Des Moines Area CC]). With the bases loaded, Josh Clark (Granada Hills, Calif./Hillcrest Christian [Riverside City]) gave Valpo a 5-3 lead when sent a tapper over the pitcher's mound that went for an infield single before all runners were awarded another base following a throwing error.

Daniel Delaney (Thousand Oaks, Calif./Thousand Oaks [Fresno State]) expanded the Crusader cushion to four runs with a single back up the box that plated Molitor and Clark.

Armed with a 7-3 lead, Lundeen rattled off four consecutive zeroes. The southpaw set the Golden Grizzlies down in order in the sixth and seventh innings. Oakland's Zach Sterry broke up his avalanche of outs with an unassuming one-out single in the eighth.

Johnson and Mahoney opened the bottom of the eighth with singles before advancing 90 feet on a fielder's choice off the bat of Lodden. Palace cracked the first pitch he saw from reliever Tyler Palm towards the right-field wall - the same location of his third-inning deep fly - but Enslen timed his jump perfectly as he gloved the drive just above the fence. Johnson trotted home from third as the Horizon League's Preseason Player of the Year robbed Palace of two additional runs batted in.

Having expended 107 pitches through eight innings, Lundeen took the hill in the ninth in search of his first complete game.

Brett Impemba greeted him with a single up the middle before Matt DiLeo made the task that much more difficult with a 13th pitch at-bat that ended in Lundeen's second walk of the day.

Lundeen rewarded head coach Brian Schmack's decision to stick with him by striking out pinch-hitter Ben Hart and third baseman Spencer Marentette. The Valpo ace recorded the 27th and final out of the game when Enslen lined out to Jeff Edwards (Massillon, Ohio/Jackson) at second base.

Lundeen scattered nine hits over his nine innings while walking two batters and striking out ten. He also struck out ten Milwaukee Panthers in last Friday's outing in Wisconsin. The lefty lowered his earned run average to 4.10 and his strikeout total has accumulated to 62, a figure that would put him in a tie for 17th-most in the nation entering Friday.

Thanks to Youngstown State's 6-5 upset of Wright State Friday night in Dayton, Valpo (11-17, 7-5 Horizon) moved to within one game of second place in the Horizon League standings. The Crusaders will send Mario Losi (2-1, 4.68) to the mound against Oakland (5-20, 3-9 Horizon). The Golden Grizzlies will counter with right-hander Aaron Dehn (1-2, 4.26). First pitch will come at 12:00 pm CT. Links to the audio and live stats are available at ValpoAthletics.com.