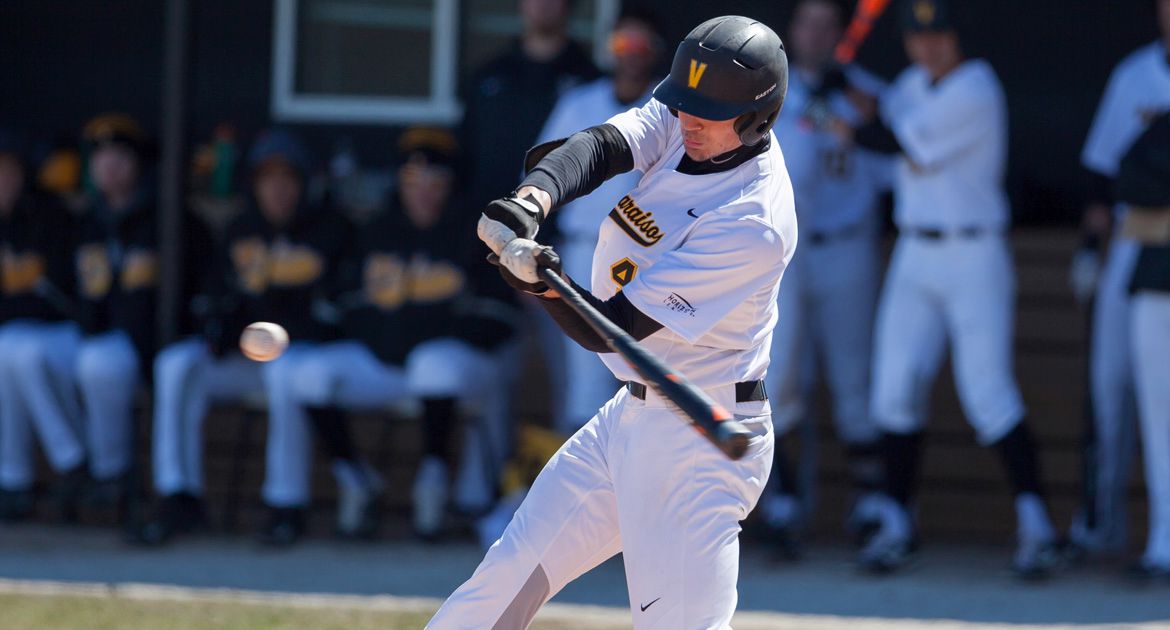 With a six-run lead in the top of the seventh, the last thing head coach Brian Schmack wanted to do was make a mid-inning pitching change. But after a pair of walks kick-started the visitor's half, he summoned Ben Mahar (Mundelein, Ill./Mundelein) in from the bullpen. In a chaffing manner, Schmack gave the ball to Mahar and said, "Might as well turn the first triple play in Crusader history."

In a 3-hour, 45-minute affair, the Crusaders polished off a sweep of the visiting Oakland Golden Grizzlies by a score of 15-7.

As they did in the first two games of the series, the Golden Grizzlies clawed their way on the scoreboard first with a single tally in the opening frame.

Green and Oakland weren't out of the inning yet when Delaney and catcher Ray Bartolomucci (Concord, Calif./De La Salle) executed a double-steal that allowed Delaney to scamper home and expand the lead to 4-1.

Oakland cut the lead in half in the top of the third, but the Brown and Gold responded with a three-run bottom half. Edwards snuck an opposite-field two-run double inside the line that scored Bartolomucci and Delaney. The third Valpo run - Mark Johnson (Evanston, Ill./Evanston Township) - came via a wild pitch unleashed by Grizz reliever Doug Beath.

Right-hander Jonah Lakatos entered the game in the middle of the fourth. Palace, the first batter he faced, took him yard on a 1-2 pitch to move the score to 8-4.

Valpo went ahead for good in the fifth after scoring three runs on one ball hit out of the infield.

Condit helped the the Brown and Gold maintain that lead until the seventh.

Freshman Luke VanLanen (Pulaski, Wis./Pulaski) walked the first two batters he faced before Mahar was called into action. Mahar's first offering was a ball out of the zone to Robby Enslen. The Oakland outfielder softly lined the second pitch he saw towards short. Mahoney let the ball bounce, gloved it on a short hop, fed Edwards for the force out, tagged Mike Brosseau, the runner who had wandered off second, before firing to first base to get Enslen for the final out of the triple play.

The momentum of the once-in-a-generation feat carried over into the home half of the inning as the Crusaders scored four times.

Palace, who reached on a leadoff double, scored three batters later on a passed ball. Edwards accumulated two more runs batted in with a two-run single to right. Johnson subsequently tripled him home for a 15-5 lead.

Oakland registered two runs in the eighth, but it was too little, too late.

Condit earned the win after Fritze was relieved an out shy of qualifying for the win. Condit didn't allow a run in 1 1/3 innings of work.

Green took the loss for Oakland (5-22, 3-11 Horizon). He lasted two innings, allowing four runs (three earned) on five hits. The freshman didn't walk a batter and struck out one.

Palace lifted his average to .339 after his 3-for-4 day. He scored four times and went 6-for-12 with eight runs scored and two homers in the series.

Mahoney reached base three times, twice by walk, and scored twice. He recorded his 489th career assist on a 6-3 off the bat of Matt DiLeo to end the fifth.

The Crusaders return to the diamond Tuesday afternoon at 3:00 pm ET/2:00 pm CT at Western Michigan. WVUR (95.1 FM, Valparaiso) will have the call live from Robert Bobb Field in Kalamazoo. Links to the audio and live stats will be available at ValpoAthletics.com.