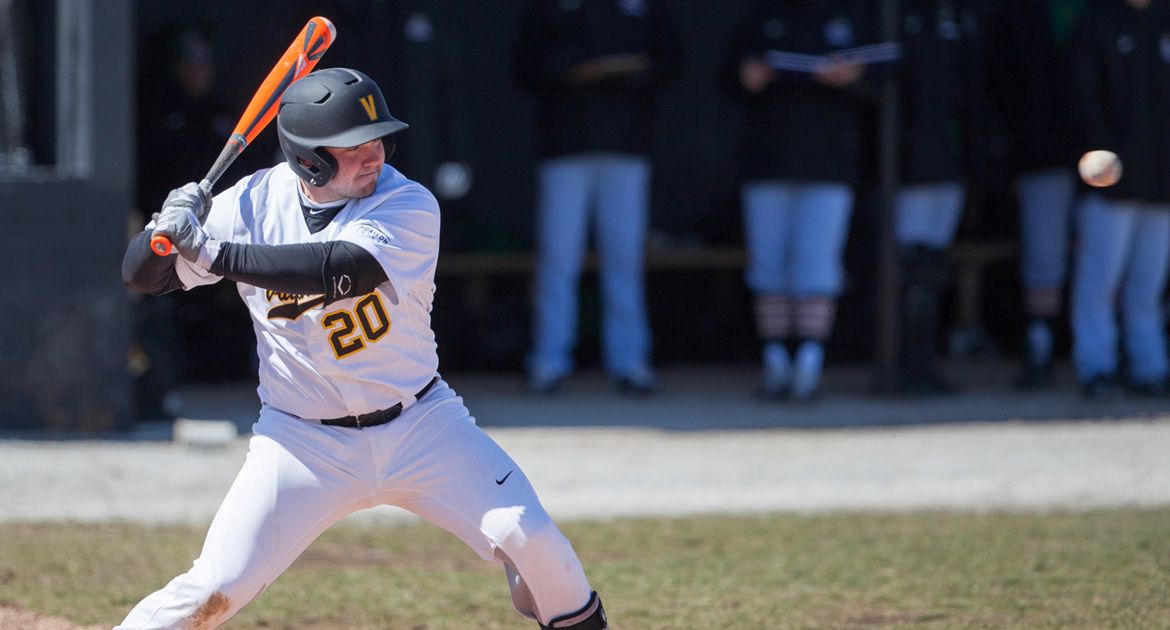 This Week in Crusader Baseball: The second half of the Horizon League schedule launches this weekend and Emory G. Bauer will play host to a dandy. First-place UIC will make the short trip over from Chicago to take on Valpo, who enters the three-game series 1.5 games behind the Flames. The Crusaders boast a 7-1 home record.

Last Time Out: The Brown and Gold’s midweek struggles continued Tuesday afternoon as Western Michigan limited Valpo to just five hits in a 6-1 defeat of the Crusaders at Robert J. Bobb Stadium in Kalamazoo. Nolan Lodden collected his 29th RBI of the season while Drew Hasler threw six innings of two-run ball in the loss. Tuesday represented the fourth midweek game in which Valpo was held to six or fewer total bases.

On the Air: Brandon Vickrey (PxP - Friday, Sunday), Tommy Mantice (Color - Friday, Sunday; PxP - Saturday), and Jordan Morandini (Color - Saturday) will have the action live on WVUR (95.1 FM, Valparaiso). Live stats will be available for all three games this weekend. In addition, ValpoGameday.com is a one-stop shop for live video, stats and social media interaction, all on the same page.

Probable Starters: Junior LHP Dalton Lundeen (3-3, 4.10) will go for his third straight double-digit strikeout game on Friday afternoon. The Crusaders are 4-1 behind Lundeen so far in HL series openers. Sophomore righty Mario Losi (2-1, 5.12) will get the ball in Saturday’s noon start. Losi has received 58 runs of support in his six starts. Junior RHP Ryan Fritze (1-3, 4.66) will close out the series for the Brown and Gold.

Series Notes: UIC leads the all-time series by a 66-55 margin. The 121 meetings are the most versus any team aside from Butler (133). UIC held serve in the first meeting of the season, winning two of three from the Crusaders on March 13th-15th. The Crusaders posted a +7 run-differential in the series in Chicago last month, but 15 of their 19 runs were scored in a 15-1 rout of the Flames in the series finale.

Looking Back:Valpo finished 2014 with a 25-28 record overall and a 12-12 mark in the Horizon League. Sophomore Dalton Lundeen compiled one of the best seasons on the mound of any lefthander in college baseball, registering HL-lows in earned run average (1.94), walks-plus-hits per inning pitched (1.02), and walks per nine innings (1.30). Offensively, Chris Manning racked up 61 hits as he boosted his career total to 264, good for second place all-time in school history.

The Horizon League doesn’t hand out a Most Improved or Comeback Player of the Year Award, but if it did, UIC’s Cody Bohanek and Valpo’s Nate Palace would be the frontrunners. Bohanek is leading the team with a .352 batting average, the second-highest in the HL. For a frame of reference, he recorded 22 hits in 100 at-bats in 2014. He’s already matched last season’s hit total - in 15 league games spanning 53 at-bats. Overall, he’s 38-for-108 having eclipsed his run, hit, double, and RBI production from last spring. As a team, the Flames are batting .284. Senior Jeff Boehm has racked up 17 extra-base hits in 116 at-bats including six home runs to go with a league-leading 39 runs batted in. Valpo’s Palace is three RBI behind the University of Kentucky transfer. Senior Tyler Detmer boasts a team-high 39 hits as part of a .328 batting average.

With all the returning (left-handed) arms in the Horizon League, Jake Dahlberg’s name most likely would not have graced many preseason award ballots, but the newcomer posted the best numbers of any hurler through the first half of the league schedule. The owner of three complete games, Dahlberg has thrown a league-most 61 1/3 innings en route to a 4-2 record accompanied by a 2.49 earned-run average. His walks-plus-hits-per-inning pitched (WHIP) is a tidy 1.01. Dahlberg is one of three starters to not allow a home run this season (Ryan Fritze being one of the other). The Crusaders managed just two unearned runs on three hits in 8 2/3 innings against him last month. Ian Lewandowski will make his seventh career appearance against Valpo on Saturday. The junior is 4-1 liftetime against the Brown and Gold. LHP Trevor Lane will make his fifth start of the year on Sunday. Lane has rebounded well since his first outing against Valpo, one in which he didn’t escape the second inning (1 1/3 IP, 4 H, 6 R, 6 ER, 3 BB, K). The newcomer now possesses a 3-2 record with a 4.50 ERA.

UIC sports one of the top defenses in the nation and has a .981 fielding percentage to show for it. The Flames have committed just 23 errors all season. One area of the game in which UIC has given freebies is wild pitches (36).

Driftless Drivel: Valpo has stranded exactly 300 runners on base thus far (9.7/game)...With 634 career at-bats entering this weekend, Spencer Mahoney should crack Valpo’s top-10 in that category by Sunday (J.J. Swiatkowski, 644). Mahoney is already the career assists leader, is second in walks (121), and seventh in runs scored (132). The Crusaders are still in search of their first pinch-hit of the season (0-23)...Nolan Lodden is batting .488 (20-41) with runners in scoring position...opponents are batting .361 (30-83) against Ryan Fritze when he’s working out of the stretch.