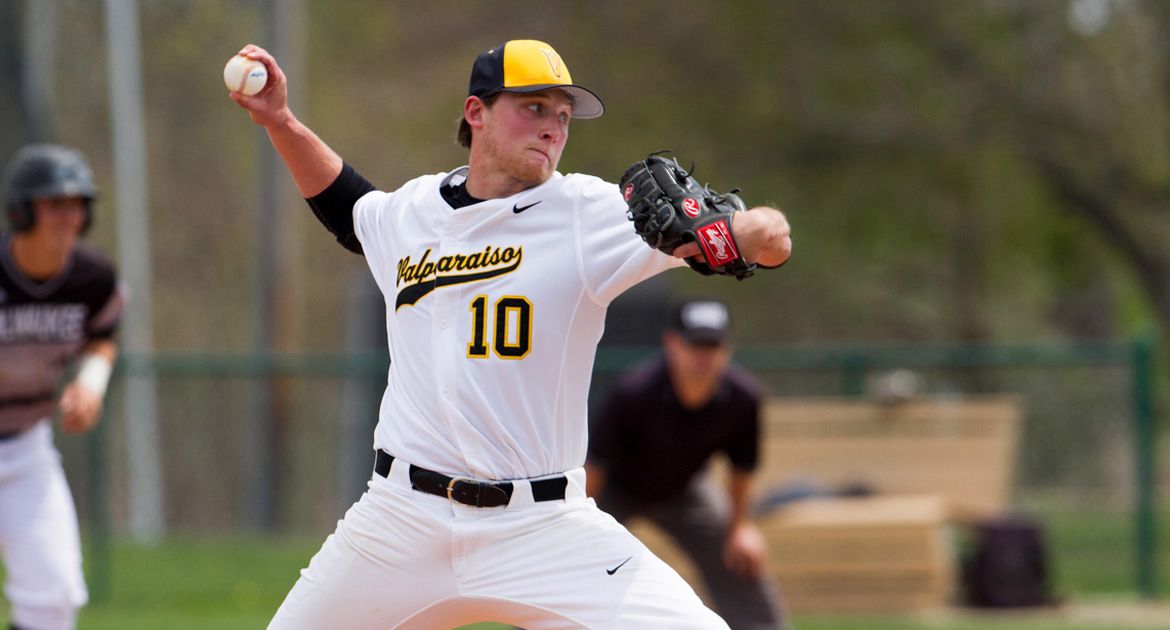 Ryan Fritze did not allow a Penguin to reach base until the 5th inning of Valpo's 5-0 win Sunday. (Avery Davis)
Youngstown State at Valparaiso | May 10, 2015

Fritze and Penguin starter Jeremy Quinlan traded zeroes through a rapid first four innings. The Crusaders managed two hits, a walk, and a hit-by-pitch in that time, but mustered no credible threat against the sophomore right-hander. Conversely, Fritze retired the first 11 batters that came to the dish before allowing a two-out walk.

Quinlan was pulled after four strong innings - his first appearance since April 25th versus Wright State - in favor of lefty Jared Wight. The move prompted a three-run Valparaiso fifth, though due to no fault to Wight.

Mark Johnson (Evanston, Ill./Evanston Township) caught a 2-2 pitch on the arm to get aboard with one out. He stole second after a Spencer Mahoney (La Grange Park, Ill./Lyons Township) fly out to center. A comedy of errors - all three with two outs - resulted in all three of the Crusader runs.

Jeff Edwards (Massillon, Ohio/Jackson) sent a sharply-hit ground ball to third base that was gloved by Matt Sullivan; however, Sullivan airmailed the throw to first, which allowed Edwards to reach second and granted Johnson home for the first run. Wight was on his way again to getting out of the inning thanks to a ground ball to short off the bat of Nolan Lodden (West Des Moines, Iowa/West Des Moines Valley [Heartland CC]). The grounder took an Emory G. Bauer hop, though, and ate up shortstop Shane Willoughby, extending the frame.

Wight had Lodden dead-to-rights on a pickoff, but first baseman Brent Gillespie's throw to second sailed wide into left-center, scoring Edwards from third on the miscue. Daniel Delaney (Thousand Oaks, Calif./Thousand Oaks [Fresno State]) added insult to injury when he reached first on a sun-aided single. Delaney skied a pop-up towards Kevin Hix, but the second baseman was never able to pick it up because of the sun.

The Crusaders led 3-0 after five innings.

Johnson added an insurance run in the sixth when he doubled home Chad Jacob (Irvine, Calif./Woodbridge) with a two-out poke to the right-field wall.

Fritze eventually exited after the seventh inning. He struck out a season-high nine batters, while walking two Penguins. Fritze kept YSU off the scoreboard while surrendering just three hits. His command was the best it has been all season as evidenced by 81 of his 120 pitches ending up in the strike zone.

Trevor Haas (Mount Prospect, Ill./Hersey) supplied the Brown and Gold with two shutout innings out of the bullpen.

The shutout was just the third of the season for Valpo - the second against Youngstown State.

First pitch of Thursday's game is set for 12:00 p.m. ET/11:00 a.m. CT. ESPN3 will carry live video along with live stats. Links will be available at ValpoAthletics.com.