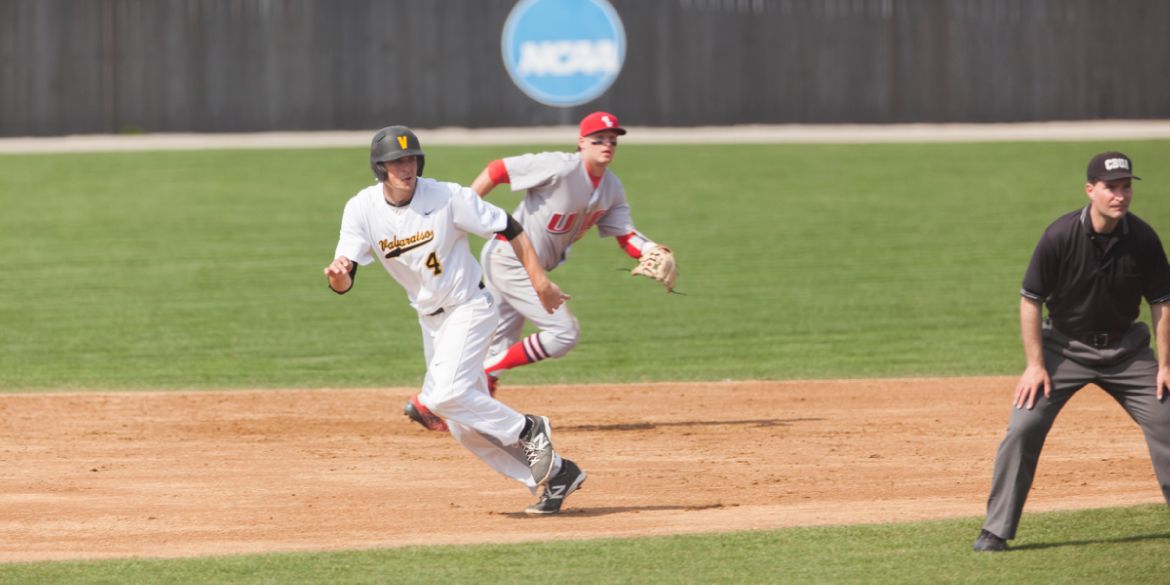 In his final career game at Emory G. Bauer Field, Spencer Mahoney had a 3-for-5 day including a double. (Avery Davis)
Purdue at Valparaiso | May 12, 2015

After trailing 6-0 following the top of the 3rd, Valpo managed to put the tying run in scoring position in the bottom of the 9th. However, Purdue reliever Matt Frawley recorded the final two outs of the game via strikeout to preserve a 6-4 Boilermaker victory.

Purdue plated two runs in each of the first three innings, manufacturing all of its offensive damage against freshman starter Connor Kaucic (Chardon, Ohio/Notre Dame Cathedral Latin). Kaucic surrendered six runs - five earned - on six hits. The lefty walked a pair and struck out one.

Valpo got on the scoreboard in the home half of the third.

Drew Hasler (South Bend, Ind./Mishawaka Marian) came on in relief of Kaucic in the third and spun off three scoreless frames.

Johnson's bat trimmed the Brown and Gold deficit to four runs in the seventh with a sac fly to left that scored freshman Chad Jacob (Irvine, Calif./Woodbridge).

Valpo added another single tally in the eighth.

Three straight Crusaders reached base after Edwards grounded out to open the bottom half of the inning. Kyle Schneider (Mishawaka, Ind./Penn) smashed a bases-loaded grounder to first baseman Kyle Wood that allowed Nolan Lodden (West Des Moines, Iowa/West Des Moines Valley [Heartland CC]) to come home from third. Alex Lyons struck out Jacob to end the threat and keep it a 6-3 game.

The Crusaders assembled an equally potent warning in the bottom of the ninth.

Purdue skipper Doug Schreiber summoned Frawley into the game with one out and two men on. Frawley's first four pitches of his outing were out of the zone and loaded the bases for the middle of the Valpo order.

The Crusaders will head to Dayton on Thursday to face against the Wright State Raiders (35-14, 18-8 Horizon) in a three-game set beginning Thursday at Nischwitz Stadium. ESPN3 will carry live video of all three games. Links to the video, as well as live stats, will be available at ValpoAthletics.com.