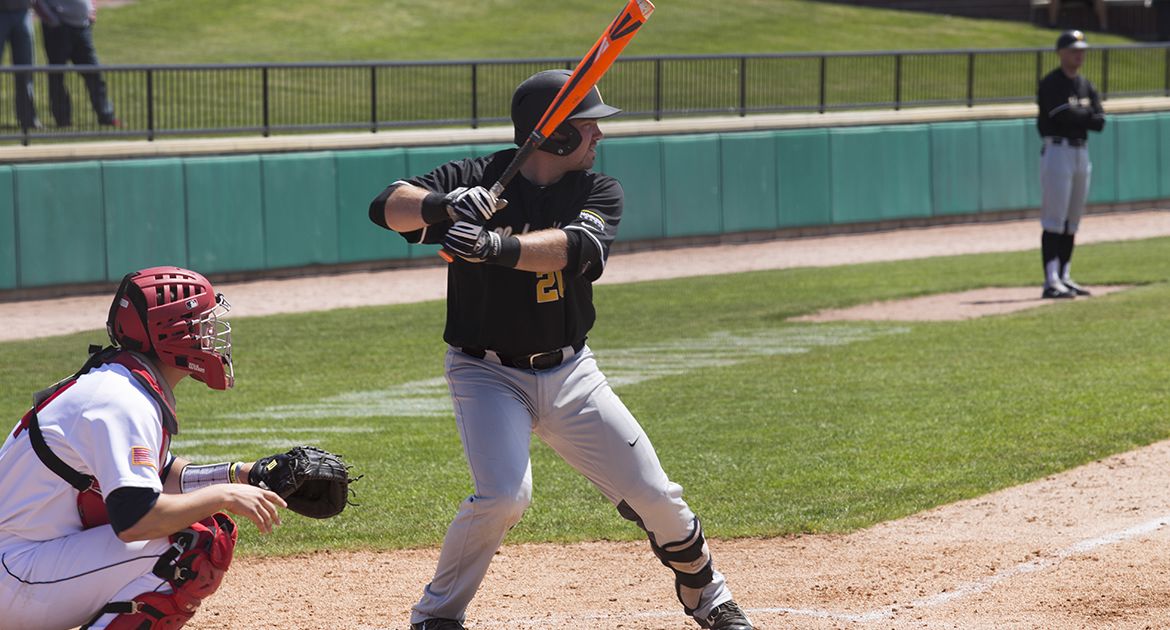 Shea Molitor went 2-for-3 with a walk against UIC on Saturday morning. (Fred Villarruel)
Valparaiso at UIC Flames | May 21, 2015

The Valparaiso Crusaders plated four runs in the latter innings of Thursday morning's contest against UIC, but it wasn't enough as the Flames hung on for an 8-5 win over the Brown and Gold at Oil City Stadium in Whiting, Indiana.

Senior Mark Johnson (Evanston, Ill./Evanston Township) got the Crusaders on the scoreboard in the top of the fifth.

Shea Molitor (Plymouth, Minn./West Lutheran [Des Moines Area CC]) opened the frame with a single off UIC lefty Jake Dahlberg. Freshman Chad Jacob (Irvine, Calif./Woodbridge) legged out a fielder's choice in his subsequent plate appearance before going first-to-third on a Kyle Schneider (Mishawaka, Ind./Penn) opposite-field single. With one out and runners on the corners, Johnson sliced a sacrifice fly to left-center that brought Jacob home to cut the deficit to 4-1.

Four Flames crossed the plate in a damning sixth frame.

Losi walked the first batters in the innings before giving way to righty Trevor Haas (Mount Prospect, Ill./Hersey). David Cronin and Zenon Kolakowski recorded back-to-back RBI singles up the middle to push UIC's advantage to 6-1. The lead ballooned to 8-1 on a Jeff Boehm two-run double.

Valpo constructed a late rally, but Flame reliever Ryan Hinchley got UIC out of a sticky situation with a four-out save, his 10th save of the season.

Johnson drove in his second run of the day in the seventh with a two-bagger down the right-field line that scored Jacob. The Crusaders had two men in scoring position, but Dahlberg got Spencer Mahoney (La Grange Park, Ill./Lyons Township) swinging on strikes to limit the impending threat to one run.

Edwards touched home on a Josh Clark (Granada Hills, Calif./Hillcrest Christian [Riverside City]) fielder's choice to the right side of the infield. The plot thickened when Molitor worked a walk to load the bases for bottom of the Brown and Gold order. Jacob came through for Valpo with a single through the right side that plated Lodden. Schneider stepped to the dish with the bases loaded and one out when he clobbered a hard-hit grounder that deflected off Mickey McDonald's glove and into left field. Clark raced around to trim the margin to 8-5.

Dahlberg registered the second out of the inning on a strikeout of Johnson. UIC skipper Mike Dee summoned Hinchley into the ballgame to face Mahoney, who represented the go-ahead run at the plate. Hinchley spun off a couple of sliders to catch the Valpo shortstop looking for the final out.

Valpo went down 1-2-3 in the ninth as UIC escaped with the three-run triumph.

Schneider had his fourth multi-hit game of the season thanks to his 2-for-3 day in the box. He added a walk and a run batted in to his stat sheet. Molitor tallied a 2-for-3 morning at the plate with a walk.

Valpo (22-30) will face Milwaukee (36-19) in an elimination contest at 7:00 p.m. CT at Oil City Stadium. Live video courtesy of ESPN3 in addition to live stats will be available. Links to both are up at ValpoAthletics.com.