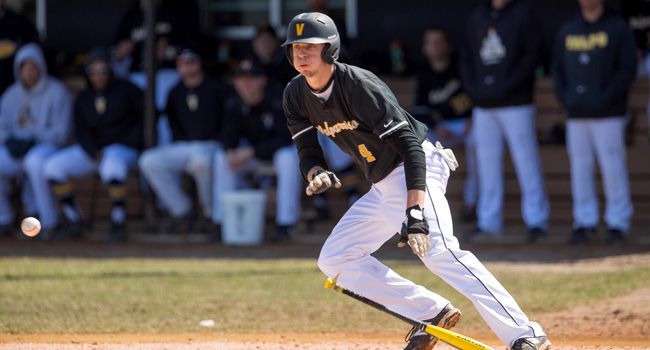 Valpo and Milwaukee entered the fifth inning tied 2-2, but the Panther offense erupted for a dozen runs in three frames as part of a 14-2 win over the Brown and Gold Thursday night at Oil City Stadium in Whiting. The loss signaled both the end of the Crusaders' season, and the collegiate careers of six graduating seniors.

Milwaukee recovered from two separate deficits before rolling to victory.

Sam Koenig touched home on a Mitch Ghelfi two-out, opposite-field double. Koenig also reached with two away in the frame.

With one out in the second, Johnson launched a two-bagger off the left-field wall to move into scoring position for the top of the order. After getting ahead 0-1 to Mahoney, the next batter, Keller missed the zone on his next four deliveries to the Crusader shortstop. The walk represented the 138th of his career, a new Valparaiso record for bases on balls. Jeff Edwards (Massillon, Ohio/Jackson) followed with an RBI single the other way to recapture a one-run lead.

Starting pitcher Ryan Fritze (Woodbury, Minn./Woodbury [Des Moines Area CC]) registered a scoreless bottom of the second, but allowed the Panthers to tie the game in third. Fritze issued a leadoff walk to outfielder Luke Meeteer, who scored on a Derek Peake double to center field.

Keller settled in after the first two innings. He set down ten Crusaders in a row from the end of the second through the top of the fifth.

What was shaping up to be a one-run tilt, turned into a lopsided affair in a matter of three outs.

The first five Milwaukee batters reached safely in a six-run fifth. Meeteer hit a two-run home run to left-center to give Milwaukee its first lead of the evening. A Nick Unes single and a Tell Taylor double sandwiched between sac flies gave the Panthers a comfortable 8-2 edge heading into the sixth.

The Panthers tacked on two runs in the sixth and four runs in the seventh to cruise to the victory that extends their season for at least one more day.

Senior Zack Walsh (Batesville, Ind./Batesville [Connecticut]) notched his 51st career strikeout for the final out of the top of the ninth.

Fellow senior reliever Ben Mahar (Mundelein, Ill./Mundelein) did not allow an earned run in 1 2/3 innings of work, adding a punch out to his stat sheet.

Kyle Schneider (Mishawaka, Ind./Penn)'s stellar month came to an end after picking up his fourth multi-hit game of the season earlier in the day.

Johnson scored the 66th run of his career on Thursday. The outfielder's run and walk total increased every year as he departs Valpo with a .340 on-base percentage. He swiped 15 bases in 143 games in a Crusader uniform.

Mahoney inserted his name into several season and career offensive categories in the school record book. In addition to drawing more walks than any Valpo player ever, the four-year starter's 216 hits rank 8th all-time. Mahoney scored 147 runs in his 193 games with Valpo, the fifth-most in school history. His career total of 38 doubles moved him into a tie for the ninth-most ever. Mahoney's 559 career assists shattered John Giusti's old mark of 488. He was unequivocally one of the best shortstops and leadoff batters to don the Brown and Gold.

The Class of 2015 was responsible for 114 wins, two Horizon League titles, and an NCAA Tournament win. Valpo's 2012 NCAA Tournament appearance was its first in 44 years.