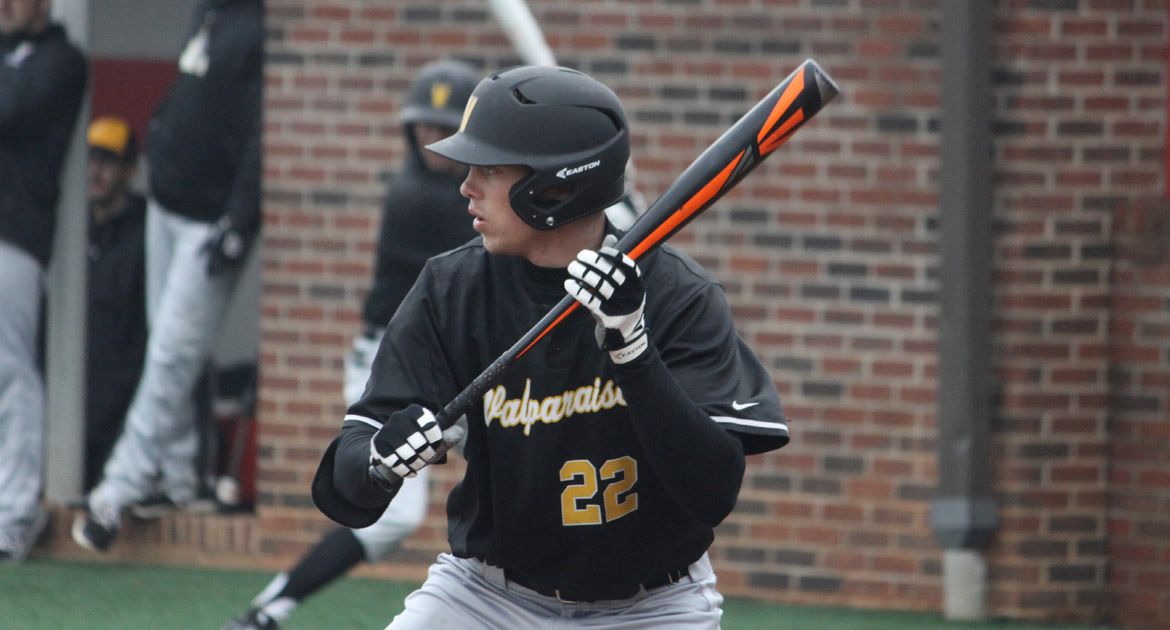 Valpo hurler Ellis Foreman (Round Rock, Texas/Stony Point) turned in a quality start against a proficient Dallas Baptist offense, but the Patriots touched up the Crusader bullpen for seven runs over the final two frames in a 10-4 win over the visiting Brown and Gold Wednesday.

Despite three days off since its last game, the Valpo offense showed little signs of rust early on.

Scott Kapers (Schererville, Ind./Mt. Carmel) drove home the first two Crusader runs on a two-strike, two-out single to left. Jeff Edwards (Massillon, Ohio/Jackson) and Dan Delaney (Thousand Oaks, Calif./Thousand Oaks [Fresno State]) crossed the plate to give Valpo a 2-0 lead after an inning and a half.

Dallas Baptist mimicked Valpo in its portion of the second. First baseman Darick Hall sent a leadoff homer over the wall in right to slice the deficit in half. The Patriots appeared to be on their way to much more when Austin Listi followed Hall's dinger with a double to left. Luke Stratman, the next batter, reached on an error at short, putting two on with no outs. Listi swiped third base before touching home on a 3-6 double play that tied the game at 2-2.

James Stea (Los Alamitos, Calif./Los Alamitos [Golden West]) single-handedly retrieved the lead for the Crusaders. He opened the visitor's third by drawing a leadoff walk off DBU starter Jordan Martinson. With Nate Palace (Westlake Village, Calif./Oaks Christian) at the plate, Stea swiped second base and advanced to third when the throw went into center. Two batters later, Delaney lifted a sac fly to left that allowed Stea to score from third base.

Foreman got himself into - and out of - serious danger in the bottom of the third. The right-hander walked the first two batters in the frame before a bunt single by Jameson Hannah juiced the bases. Trooper Reynolds knotted the game up with an RBI ground out to short. With one out, the Crusader starter issued his third walk of the inning to Hall to again load the bases. The double play ball came to Foreman's rescue again, though. Listi scorched an 0-1 offering to Chase Dawson (Chesterton, Ind./Andrean) at third. The freshman gloved it, kicked the bag at third, and fired across the diamond for the inning-ending twin killing.

Given second life, Foreman settled in and kept the Patriot offense under control. Matt Duce lined a leadoff double into the right-center field gap to kick off the bottom of the fifth, but the DBU catcher was erased in the next sequence on a double play off the bat of Justin Wall.

It remained a 3-3 game until the Valpo half of the sixth, and it all started with a Josh Clark (Granada Hills, Calif./Hillcrest Christian [Riverside City]) two-out bunt single. He stole his third base of the season to advance into scoring position for Shea Molitor (Plymouth, Minn./West Lutheran [Des Moines Area CC]). Molitor legged out an infield single to short, and Clark was able to score on an error by the first baseman.

Dallas Baptist recaptured the edge for good in the bottom of the seventh, recording four runs on just one hit. Three walks, two wild pitches, and an error led to the Patriots seizing a 7-4 advantage. Listi dealt the big blow with a two-run single to center.

DBU added three tallies in its last at-bat, the home half of the eighth.

Chet Joslyn (Battle Creek, Mich./Lakeview) was saddled with his second loss of the season after allowing three runs in 1/3 inning. Joslyn walked three in his brief stint.

Clark led the offensive effort for the Crusaders. The senior outfielder collected three hits on the night to raise his average to .340. Edwards finished the evening 2-for-4 with a run scored. Nolan Lodden (West Des Moines, Iowa/West Des Moines Valley [Heartland CC]) registered his fifth multi-hit tilt of the season by virtue of his 2-for-4 performance at the plate. Stea failed to log a hit, but he did reach base twice via walk and stole a base atop the lineup.

Valpo (3-9) will seek to even the series Thursday evening at Horner Field at 6:30 pm. Trevor Haas (Mt. Prospect, Ill./Hersey) will take oppose the Patriots in his first start of the season.