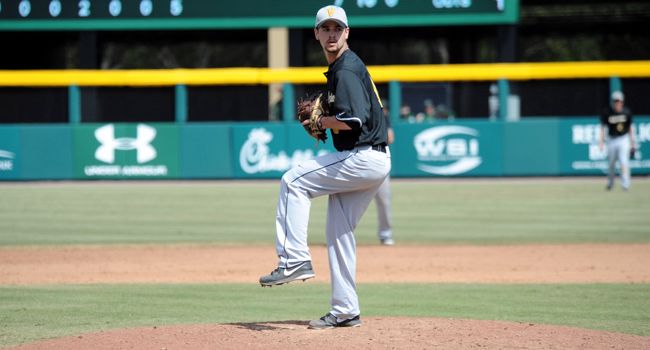 The Valpo baseball team manufactured five runs on eight hits over the final three innings of Saturday's game at Bill Aker Baseball Complex in Highland Heights to roll to a 6-4 victory over Northern Kentucky. The win clinched the series for the Brown and Gold, who will go for the sweep on Sunday.

For the seventh time in its first 17 tilts, Valpo gave its starting pitcher a lead before taking the game mound. Nolan Lodden (West Des Moines, Iowa/West Des Moines Valley [Heartland CC]) worked a two-out walk against NKU starter Justin Watts before moving into scoring position with his fourth stolen base of the season. The stolen base proved vital when Dan Delaney (Thousand Oaks, Calif./Thousand Oaks [Fresno State]) shot a single through the left side of the infield that plated Lodden.

Northern Kentucky responded with three of its own in the first, though. The Norse used a single and a pair of walks from Trevor Haas (Mt. Prospect, Ill./Hersey) to load the bases with nobody out. Logan Spurlin and Trey Ganns recorded back-to-back RBI ground outs to seize a 2-1 edge. Dominic Mercurio later reached on an error at second base that brought in the third NKU run. Haas buckled down after the first and was excellent the rest of the way.

It stayed a 3-1 game until the Valpo half of the seventh when Lodden sliced a sacrifice fly to left that scored Gio Garbella (San Diego, Calif./Cathedral Catholic). Garbella got the inning going with a leadoff single.

The Crusaders commandeered the lead in the eighth when they touched up the Norse bullpen for three runs. Josh Clark (Granada Hills, Calif./Hillcrest Christian [Riverside City]) popped the top off the frame with a double down the first-base line. Shea Molitor (Plymoutn, Wis./West Lutheran [Des Moines Area CC[) stroked a game-tying single to left field off reliever Kevin Herren. Molitor advanced to second on the play when the throw came late to the plate. Sam Shaikin (West Hills, Calif./Chatsworth) was called upon to sacrifice Molitor over to third base. The freshman dropped down a bunt towards the left side of the infield and legged out the throw, putting runners on the corners with nobody out.

Fellow freshman Scott Kapers (Schererville, Ind./Mt. Carmel) greeted right-hander Tyler Miller with a single up the middle that gave the Crusaders the lead for good. A wild pitch later in the inning scored Kapers, granting Valpo a much-desired insurance run.

Haas, who had rattled off six consecutive scoreless frames, entered the bottom of the eighth with a 5-3 lead. He retired the leadoff man, but surrendered three straight singles as NKU sliced the deficit to 5-4. Senior Bryce Yoder (Spencerville, Ind./Eastside) was beckoned into the contest with runners on first and second with one out. He summoned a harmless fly out from Kyle Colletta, the first man he faced. The Crusaders got out of the inning when the home plate umpire cited Brad Bohlen for batter's interference, a call that came during a Kapers' pickoff attempt down to second base.

Delaney gave Yoder a little more breathing room when he launched a solo home run to left-center field in the top of the ninth. It was the senior's second dinger in as many games, and just the second run Valpo has posted in the ninth inning all season.

Yoder worked around a leadoff single in the ninth to secure the 6-4 victory and notch his first save of 2016 in the process.

Haas' final line read as such: 7 1/3 IP, 8 H, 4 R, 3 ER, 4 BB, 6 K. Though three errors were committed behind him, Haas was the beneficiary of three double plays. He was rewarded with his first win of the season.

Delaney, Clark, Shaikin, and Kapers all finished with two-hit days at the plate. Lodden and Molitor were both 1-for-3 with a walk and a run scored.