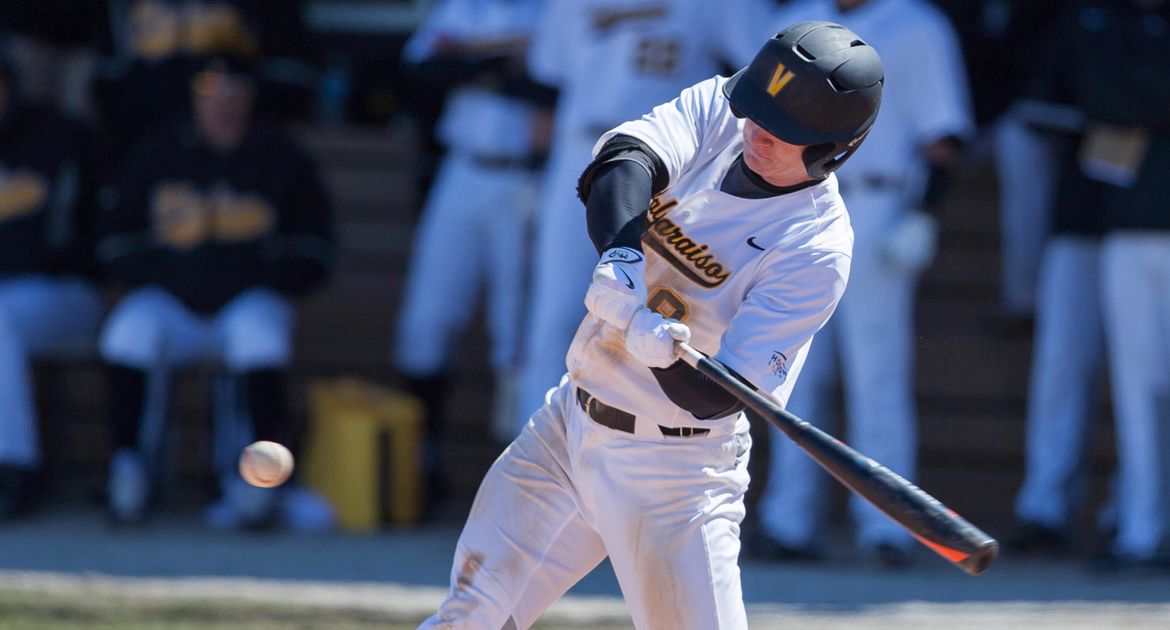 Mario Losi (Anaheim, Calif./Canyon) got all the run support he needed and more Sunday afternoon in a 16-1 victory over Northern Kentucky at Bill Aker Baseball Complex in Highland Heights. Valpo set season watermarks in runs and hits (19) while the junior right-hander limited the Norse to one run over six innings for his second win of the season.

After posting five runs in the final three innings of Saturday's contest, the Crusader offense reconvened for some more fun and good cheer in Sunday's series finale. All nine members of the starting lineup either drove in a run or scored. Seven Crusaders achieved both.

The Crusaders scored early and often, tallying four runs in the opening frame and ten in the first four innings.

Lodden started the merry-go-round in the first with an RBI single down the first-base line. After a Dan Delaney (Thousand Oaks, Calif./Thousand Oaks [Fresno State]) sac fly made it 2-0, Josh Clark (Granada Hills, Calif./Hillcrest Christian [Riverside City]) kept it going with a triple into the right-field corner that scored Lodden. Freshman Sam Shaikin (West Hills, Calif./Chatsworth) put Valpo ahead 4-0 by virtue of his RBI single to left field.

Losi got his team right back into the dugout with a 10-pitch bottom of the first. Furthermore, he retired the first seven NKU batters he faced.

Lodden collected his second RBI in as many innings with a two-out single that brought home Stea. Valpo added another single tally in the third on a Kapers' run-scoring hit.

Lodden and Kapers pried open the floodgates in the fourth. The Crusader left fielder ripped a drive off the center field wall that went for a double. Stea and Chase Dawson (Chesterton, Ind./Andrean), who had greeted NKU reliever Mitch Asman with back-to-back singles, scored and advanced to third base, respectively, on Lodden's two-bagger. Five batters later, Kapers thrust the Brown and Gold into double digits thanks to a two-run single that made it 10-0.

Losi's lone blemish all afternoon was a Logan Spurlin solo shot. Outside of that, the junior worked efficiently. He retired the leadoff man five times in six frames.

Valpo piled on six runs in a prolonged top of the sixth. Clark swatted an opposite-field leadoff single before reliever Jordan Menfee walked the next three Crusaders he faced. Stea made him pay with a two-run single to left. He and Dawson later came into score when Lodden accumulated his fourth and fifth RBIs of the game on a base hit to center.

The Valpo bullpen preserved the win for Losi, who yielded six hits and a walk while striking out two. Alex Dirienzo (Somerset, Pa./Somerset [Akron]), Scott Jerge (Munster, Ind./Munster), and Ellis Foreman (Round Rock, Texas/Stony Point) each worked a scoreless frame in relief in the 16-1 rout.

The 16 runs and 19 hits equaled season watermarks for Valpo. It last scored that many runs last March 7th at USC Upstate when the Brown and Gold dispatched the Spartans, 17-5. The club raised its batting average from .272 to .283 following the 19-for-44 spectacle.

Valpo turned six double plays in the three-game series. In the process, the Crusaders seized their first road sweep in Horizon League play since May 16th-17th, 2014 when they took three at Youngstown State.

The gates at Emory G. Bauer Field will swing open Thursday when Valpo (7-11, 3-0 Horizon) plays host to Wright State (13-7, 3-0 Horizon). WVUR (95.1 FM, Valparaiso) will have the call live at 3 pm CT. Live stats will also be available at ValpoAthletics.com.