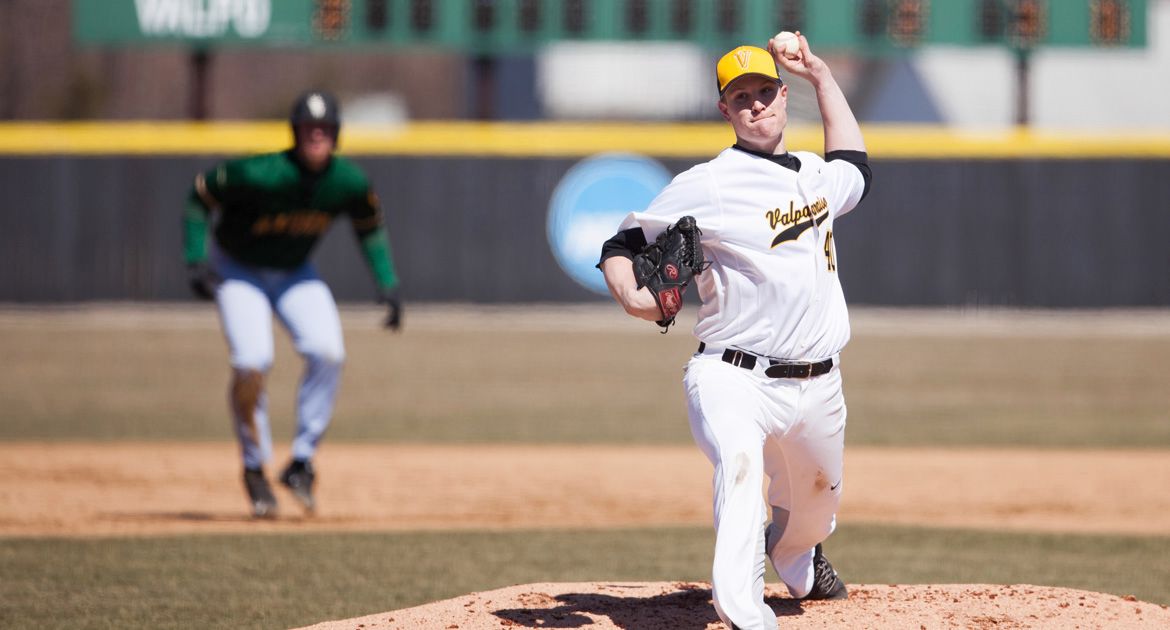 This Week in Crusader Baseball: After opening the season with 18 road games, Valpo returns to Emory G. Bauer Field to pop the top on the 2016 home slate. The Crusaders welcome Wright State to town for a single game Friday and a Saturday twinbill. Like Valpo, the Raiders recorded a sweep in their opening weekend of HL action.

Last Time Out: The Crusaders opened Horizon League play last weekend with a bang, sweeping NKU in Highland Heights. Nolan Lodden went 6-for-12 with six RBIs at the plate en route to Horizon League Batter of the Week honors. Valpo set season highs in runs and hits (19) in its 16-1 sweep-clinching win Sunday.

Following the Crusaders: Audio: WVUR (95.1 FM, Valparaiso) - Brandon Vickrey (PxP), Tommy Mantice (Color). Links to the radio call and live stats are posted at ValpoAthletics.com. In addition, follow @ValpoBaseball for in-game updates and a behind-the-scenes look at the Crusaders throughout the season.

Probable Starters: Senior southpaw Dalton Lundeen (2-2, 3.78) will seek to continue his recent run of dominance Friday in the first of the three-game set for the Crusaders. Senior RHP Trevor Haas (1-1, 2.74) gets the ball in the first game of Saturday’s doubleheader. Junior right-hander Mario Losi (2-2, 6.94) will close out the series on the bump for Valpo.

Series Notes: Wright State leads the all-time series, 31-17, in a matchup that began in 1992. The Raiders took four of five from the Crusaders last season with three of those five contests decided by one run. Valpo is 6-2 vs. WSU in its last eight at home.

In the Other Dugout: Wright State also recorded a three-game sweep in its Horizon League-opening series last weekend. The Raiders are 13-7 overall and have been winners in seven of their previous eight tilts. Three of their seven losses have come at the hands of Top 10 teams: two to #8 NC State, and one to #4 Louisville, all road affairs. WSU was predicted to finish first in the Horizon League Coaches Poll, one season removed from assembling a 43-17 record and eliminating both Ohio and Notre Dame in the NCAA Regionals.

Catcher Sean Murphy has attracted the eyes and ears of numerous pro scouts after a sophomore campaign that yielded a .329 batting average and 36 RBIs en route to Horizon League Player of the Year honors. The Johnny Bench Award semifinalist neutralized opponents’ running games in 2015, throwing out 17 of 49 (35%) potential base stealers. However, an injury on March 1st has kept Murphy out of the Raider lineup since. His return date remains indefinite. Jason DeFevers has donned the tools of ignorance in Murphy’s absence. Opposing base stealers have taken notice, too, as they’ve swiped 18 bags in 21 attempts (86% success rate) with DeFevers behind the plate.

Offensively, Wright State carries a .254 batting average, but an aggregate .412 slugging percentage thanks in large part to 18 home runs. WSU paces the league in triples (12) and stolen bases (39). Newcomer J.D. Orr has teetered between the leadoff spot and the middle of the Raider order. His .343 average and three triples are team watermarks. Ryan Fucci is one of the top power bats in all of mid-major baseball (18 HRs in 279 at-bats at WSU), but the strikeout has proven to be his Achilles’ heel (85 during that same span). Fucci’s speed can’t be overlooked, either. His 13 stolen bases are second only to shortstop Mitch Roman. Speaking of which, the junior has run rampant on the basepaths, racking up 15 SBs in 16 attempts. Roman, Orr, and Fucci each have 16 runs scored and 23 hits (team highs).

Starting pitcher Jesse Scholtens etched his name into the NCAA annals on March 11th when he threw the 13th nine-inning perfect game in Division I history at Dayton. Scholtens, WSU’s Friday starter, is 2-0 with a 4.45 ERA in 32 1/3 innings spanning five starts, and has punched out 36 batters opposite seven walks. Robby Sexton (2-1, 1.47) is back after missing the 2015 season recovering from Tommy John surgery. The left-hander treaded into the sixth inning for the first time this season last Saturday vs. Youngstown State, but 64 pitches has been his max pitch count. Sexton was a Second Team All-League selection in 2014. Freshman Caleb Sempen, the scheduled starter for the series finale, is on a 14-inning scoreless streak. Elon scratched two runs across against the right-hander on Feb. 21st, but Georgia, Eastern Michigan, and YSU were all blanked by Sempen since.

Driftless Drivel: Dalton Lundeen is 4-2 with a 2.00 ERA and a 1.00 WHIP in 45 career innings vs. Wright State...there isn’t a Crusader on the current roster with a stolen base against the Raiders...outfielder Josh Clark batted 7-for-17 (.412) with four runs scored against WSU last season...Jeff Edwards owns the most career RBIs (4) versus the Raiders...Valpo is batting .333 (56-for-168) vs. LHP...Shea Molitor already has more hits with runners in scoring position this season (11) than all of last year (9).