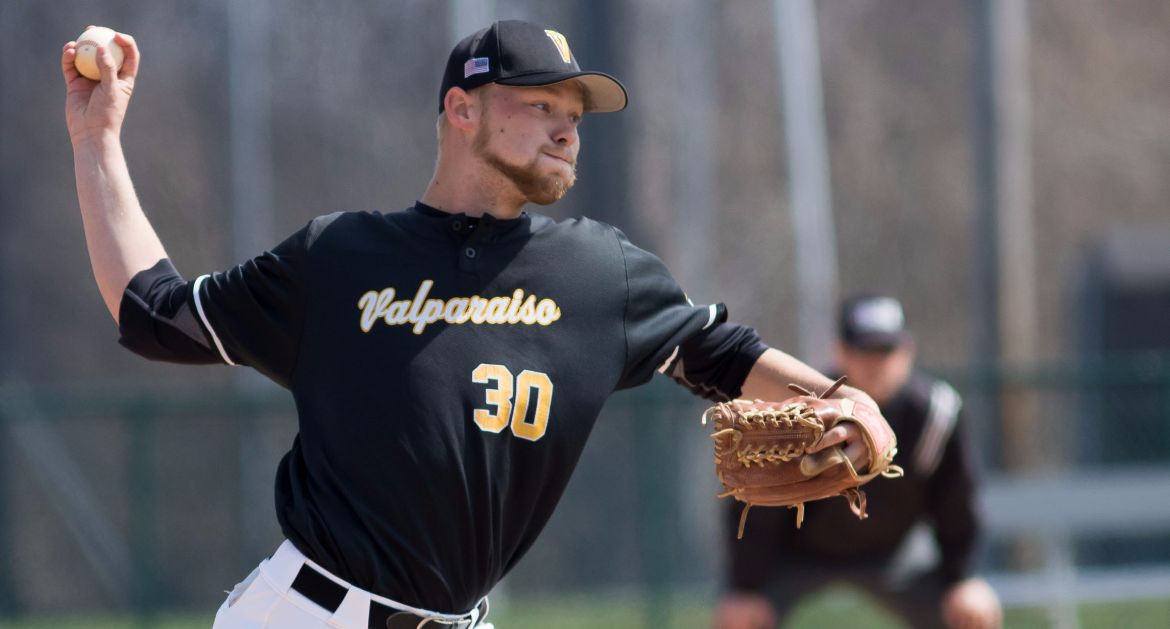 Trailing by a run and down to its final out with the bases empty, the Valpo baseball team pulled off an improbable 3-2 comeback win against Wright State in the first game of a doubleheader Saturday at Emory G. Bauer Field. The Raiders salvaged a split, however, taking the afternoon tilt, 7-3.

Six of the nine runs allowed by the Crusaders were unearned. A Valpo defense that had committed eight errors in its previous six contests entering Saturday made that many miscues in the twinbill.

Senior starting pitcher Trevor Haas (Mt. Prospect, Ill./Hersey) set the tone in the opener. He fired off eight innings of what should've been shutout ball. However, an infield error in the third inning led to two Wright State runs.

The Raiders took that 2-0 lead into the home half of the seventh on the back of left-hander Robby Sexton. Sexton had silenced the Valpo offense for six innings, but he departed after 73 tosses. The Crusaders were the benefactors of an unearned run themselves off reliever Mark Meyer. The right-hander retired the first two batters he faced before issuing a four-pitch walk to freshman Chase Dawson (Chesterton, Ind./Andrean). With a full count on James Stea (Los Alamitos, Calif./Los Alamitos [Golden West]), Dawson was running on the payoff pitch when the Valpo center fielder skied an offering to shallow right field. Miscommunication between the second baseman and right fielder led to the ball finding the grass, and Dawson racing around to score.

Fritze worked around a two-out error to keep it a 2-1 game entering the final frame.

Raider closer Jack Van Horn, who had been asked to convert the five-out save, set down the first two Crusaders he faced in the ninth. Dawson fell behind 1-2 in the count before hooking a single through the right side. Stea kept hope alive with a soft tapper to short that went for an infield single. Nolan Lodden (West Des Moines, Iowa./West Des Moines Valley [Heartland CC]) brought the home crowd to its feet with a game-tying single to right.

With two outs and the winning run just 90 feet from home plate, Josh Clark (Granada Hills, Calif./Hillcrest Christian [Riverside City]) slapped a 3-2 pitch the other way for a walk-off single.

Valpo's last victory when trailing after eight innings came on May 2nd, 2014 vs. Oakland, in a 5-4 affair that required 11 innings. The club's last walk-off triumph in the ninth occurred on March 5th, 2013 versus Villanova in Port Charlotte, Florida.

Dawson reached base twice in the tilt and scored both times. Nate Palace (Westlake Village, Calif./Oaks Christian) was the only player with more than one hit in the opening contest.

The tide of momentum was unable to carry the Crusaders to a sweep, though.

Just as it did in the first game, the Valpo defense spotted Wright State a pair of early, unearned runs. The Brown and Gold committed two of their five errors with two outs in the second inning. The second and third chances resulted in two WSU tallies.

The Raiders doubled their lead to 4-0 in the fourth, and it all started with an error in center.

Wright State center fielder Ryan Fucci, the leadoff batter in the inning, stroked a Mario Losi (Anaheim, Calif./Canyon) offering towards the warning track in center. Stea, who read it well off the bat, caught the ball on the run, but fumbled the transfer. Nevertheless, Bret Bruington, the third-base umpire, ruled that Stea never secured the catch and awarded Fucci a double. He came home to score on a wild pitch after taking third on a sacrifice bunt.

Valpo finally found a solution for WSU starter Caleb Sampen in the sixth. The first five Crusaders reached in a three-run frame.

Pinch-hitter Luke Syens (Burlington, Wis./Burlington [Madison]) ripped the first pitch he saw from the right-hander for a run-scoring single that plated Stea. It was Syens' knock that put Valpo on the scoreboard. Palace kept the carousel moving with a soft liner over the third baseman's head that made it 5-2. Dan Delaney (Thousand Oaks, Calif./Thousand Oaks [Fresno State]) worked a walk to load the bases for Gio Garbella (San Diego, Calif./Cathedral Catholic), who entered the game in the top of the fourth for Shea Molitor (Plymouth, Minn./West Lutheran [Des Moines Area CC]).

Sampen, however, got Garbella to roll over for a 6-4-3 double play. Syens touched home on the twin-killing, but Palace was stranded on third base after Chad Jacob (Irvine, Calif./Woodbridge) bounced out for the final out.

Wright State added single tallies in the seventh and ninth to earn the split with a 7-3 win.

Sampen improved to 3-0 with the win while Losi fell to 2-3. Logan Blair recorded the final five outs to earn his second save of the season.

Palace again went 2-for-3 at the dish with a walk. He had one of Valpo's two runs batted in during the second tilt.

Valpo (8-13, 4-2 Horizon) will have a couple days to prepare for Ball State (13-11, 1-1 MAC). The Cardinals will arrive to Emory G. Bauer Field Tuesday afternoon for a 3:00 pm first pitch. WVUR (95.1 FM, Valparaiso) will have the call with live stats also available. Links to both are posted at ValpoAthletics.com.