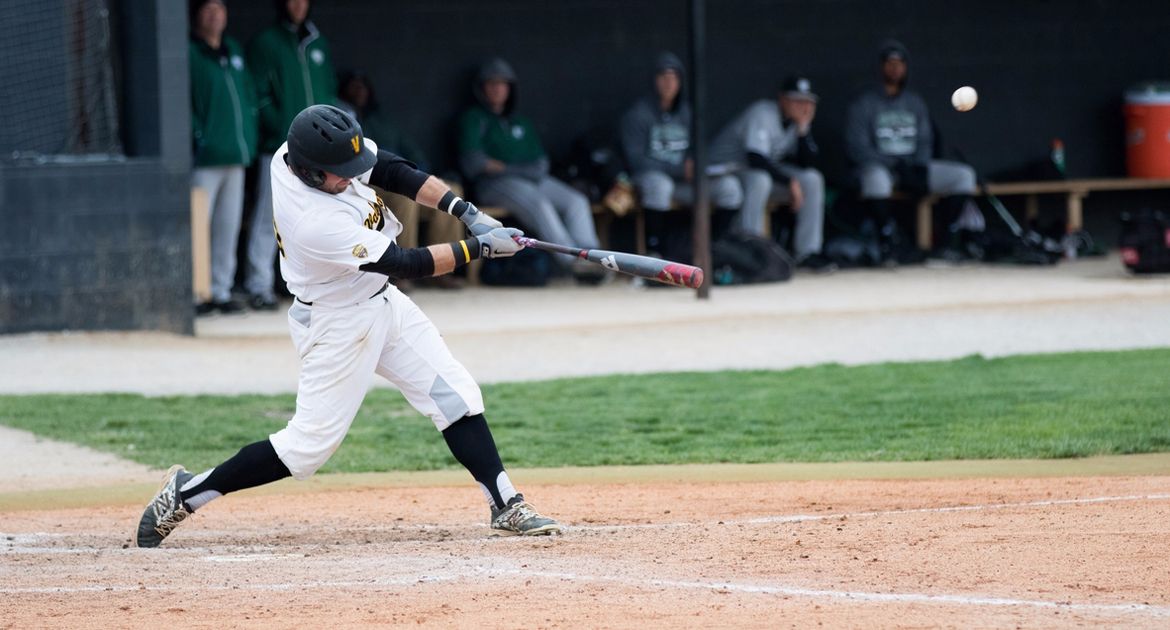 Valpo managed to score in just one of its 18 offensive innings Sunday as UIC defeated the Brown and Gold in both tilts of a doubleheader at Emory G. Bauer Field. The Flames won the opening game 4-3 in 10 innings before rolling to a 5-0 triumph in the nightcap.

Shea Molitor (Plymouth, Minn./West Lutheran [West Des Moines Area CC]) and Dan Delaney (Thousand Oaks, Calif./Thousand Oaks [Fresno State]) helped the Crusaders wipe away a 3-0 deficit in the bottom of the fifth of the opener. Molitor extended his RBI streak to seven games with a run-scoring double to left-center that brought in James Stea (Los Alamitos, Calif./Los Alamitos [Golden West]). Delaney tied the contest at 3-3 in the next at-bat when he shot a two-run knock up the middle to score Molitor and Nolan Lodden (West Des Moines, Iowa/West Des Moines Valley [Heartland CC]).

The Crusader bats, however, went MIA after the fifth. UIC starter Ian Lewandowski and reliever Trevor Lane retired the next 15 batters they faced while Gabe Dwyer's 10th-inning, two-out RBI single was the difference in the Flames' 4-3 win.

Valpo appeared to right the ship early on in game two. Lodden and Josh Clark (Granada Hills, Calif./Hillcrest Christian [Riverside City]), the first two batters in the Crusader lineup, reached against starting pitcher Mitchell Schulewitz. The junior, however, wiggled his way out of the threat thanks in a large part to a 4-6-3 twin killing. Schulewitz quickly settled down, as he sent down 11 of the next 12 batters that came to the plate.

Mario Losi (Anaheim, Calif./Canyon) was fabulous yet again in Horizon League play. He and Schulewitz took a scoreless game into the sixth inning before the Flames struck with a successful suicide squeeze. Cody Bohanek's soft bunt back to the mound provided Conor Philbin all the time he needed to race home and make it a 1-0 game.

Losi departed a 1-0 game in the top of the seventh with two outs and two men on base. Both of his runners crossed the plate when designated hitter Alex Dee's single off left-handed reliever Chet Joslyn (Battle Creek, Mich./Lakeview) swelled the UIC advantage to 3-0. The Flames tacked on another run in the frame on a Bohanek RBI single.

Valpo had the leadoff man reach in the sixth, seventh, and eighth innings, but were unable to advance that runner past second base in any of the three occasions.

Lane worked another two innings of relief in the second game. The Flames secured the sweep with the 5-0 win.

Valpo (20-20, 11-7 Horizon) will return to the field Tuesday afternoon in DeKalb, Illinois. Northern Illinois (18-25, 12-6 MAC) takes a six-game winning streak into the 3:00 pm CT start. Free live stats and pay video will be available for the Crusaders' final midweek game away from Emory G. Bauer Field. Links to those are listed at ValpoAthletics.com.