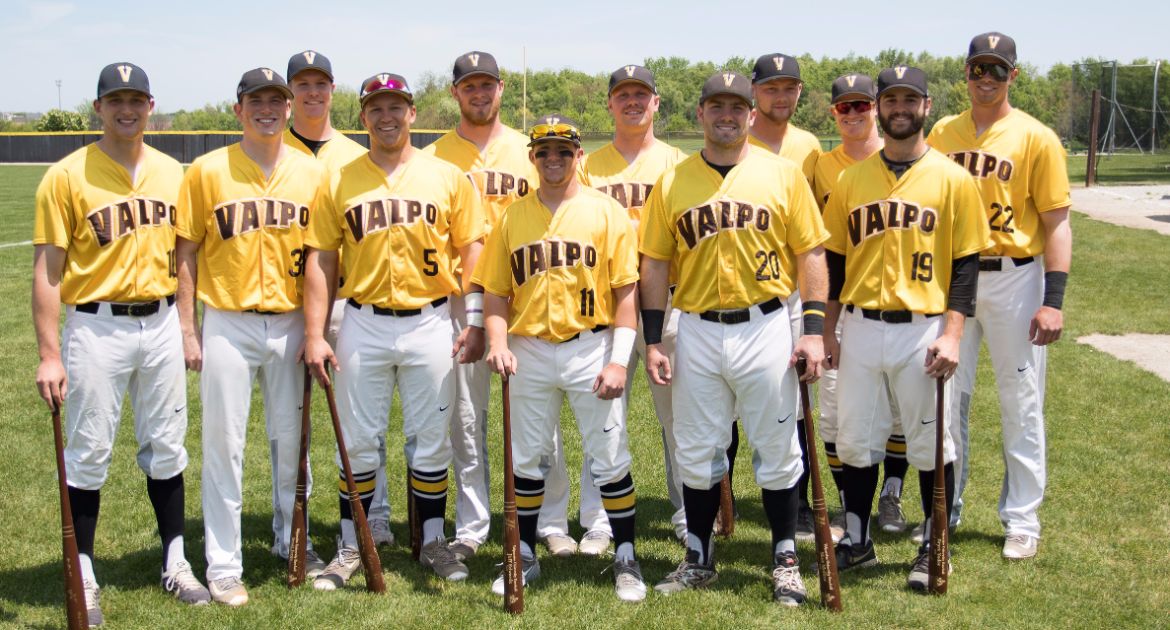 On a day when their twelve graduating seniors were honored, the Crusaders received five runs batted in, five runs scored, and a save from their departing class. Valpo rallied in the middle innings to overtake Youngstown State, 7-5, at Emory G. Bauer Field. The Crusaders leapfrogged UIC in the process, seizing the No. 3 seed in next week's Horizon League Championship.

"The twelve seniors that played their final game at Emory G. Bauer Field today represent what Valpo Baseball is. These guys have a bright future ahead," head coach Brian Schmack said.

The Penguins scored the next three runs of the game, two of which came via sacrifice flies. Youngstown State chased Valpo starting pitcher Ellis Foreman (Round Rock, Tex./Stony Point) in the top of the third as the visitors strung together six hits in 2 1/3 innings against the right-hander. Alex Dirienzo (Somerset, Pa./Somerset [Akron]) entered a highly-flammable, bases-loaded situation, but restored order by retiring the first two Penguins he faced.

Youngstown State starting pitcher Michael Semonsen stymied the Brown and Gold for the first four innings. Valpo finally broke through against the southpaw in the fifth, though.

Senior Jeff Edwards (Massillon, Ohio/Jackson) drew a leadoff walk that opened an offensive avalanche. James Stea (Los Alamitos, Calif./Los Alamitos [Golden West]) drove in the Crusader shortstop with a triple down deep into the right-field corner. Nolan Lodden (West Des Moines, Iowa/West Des Moines Valley [Heartland CC]) made it a one-run game with a two-strike single back up the middle that allowed Stea to jog home from third.

Shea Molitor (Plymouth, Minn./West Lutheran [Des Moines Area CC]) worked a bases-loaded walk from Semonsen before Clark corked his second run-scoring single of the afternoon, tying the tilt up at 4-4. The knock chased Semonsen, who gave way to reliever Joel Hake. Hake was met by Nate Palace (Westlake Village, Calif./Oaks Christian), who delivered an opposite-field RBI double to put the kibosh on a four-run bottom of the fifth.

Edwards and Lodden peppered the right side of the field with a pair of the triples in the sixth to extend the home team's lead to 7-4. Edwards sliced a ball down the right-field line to kick off the frame. Hake nearly wiggled his way out of the inning after recording two straight ground outs that were unable to bring Edwards home. Lodden didn't let the opportunity go to waste, however. The outfielder looped a two-out triple to the gap in right-center field. He crossed the plate in the next sequence when Molitor picked up his 51st run batted in of the season thanks to a single through the left side.

Valpo's three-run lead appeared to be in jeopardy during the visitor's half of the eighth. The first two men reached for YSU before Luke VanLanen (Pulaski, Wis./Pulaski) registered the first two outs of the inning via a strikeout and fielder's choice, respectively. An Alex Larivee single loaded the bases for Billy Salem, who drew a five-pitch walk. Ryan Fritze (Woodbury, Minn./Woodbury [Des Moines Area CC]) doused the fire, though, with a strikeout of Rohan.

Fritze worked around a leadoff HBP in the ninth to nail down his fifth save of the season. Dirienzo earned the win as he threw 2 2/3 scoreless innings. Senior Bryce Yoder (Spencerville, Ind./Eastside) turned in two shutout innings of his own in his 72nd appearance on the mound for Valparaiso.

Offensively, Lodden reached base in all five of his plate appearances. He scored twice and drove in a pair in addition to stealing two bases.

Clark and Stea also had multi-hit afternoons. Clark finished the series 7-for-11 with two runs scored and three RBIs. Stea logged two hits in each contest of the three-game set. Edwards touched home twice, once on his triple, the other on a walk.

Valpo (27-26, 17-12 Horizon) closed out the regular season on a five-game winning streak. The victory guaranteed the Crusaders will not finish with a losing season for the first time in three years. Wright State's 12-5 defeat of UIC on Saturday helped Valpo vault over the Flames for third place in the Horizon League standings.

As a result, the Crusaders will face the sixth-seeded Northern Kentucky Norse (20-33, 9-21 Horizon) Wednesday afternoon in the Horizon League Championship at Nischwitz Stadium in Dayton, Ohio. ESPN3 will carry live coverage of all games in the league tourney with live stats also available. First pitch between Valpo and NKU is slated for 4:00 pm ET/3:00 pm CT.