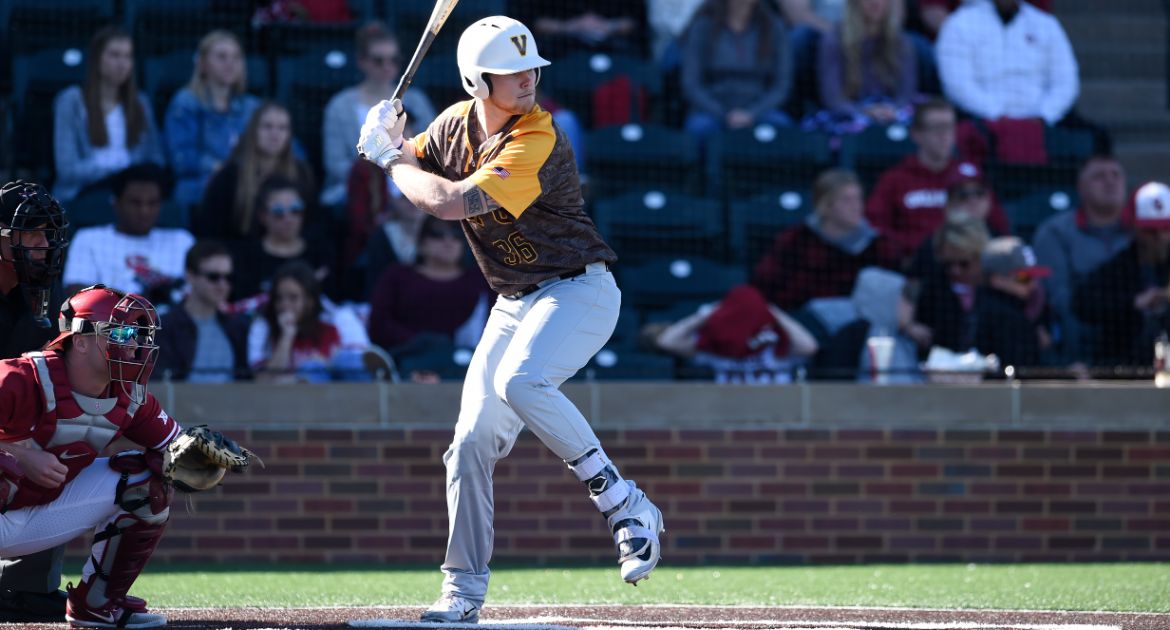 Next Up in Crusader Baseball: The Valparaiso University baseball team has long stocked its roster with talent from the state of California. For the first time since the opening series of the 2015 season, the Crusaders will make an appearance in the Golden State on Tuesday night, the first of five games in California this week, starting with back-to-back midweek affairs with UC Riverside.

Last Time Out: Valpo split four games in Arizona this past weekend, topping preseason WAC favorite Grand Canyon 12-6 and 11-7 while falling in a pair of one-run games to CSUN. Maybe the most memorable inning of the weekend came in Friday’s 14-13 loss, when the Crusaders scored nine times in the top of the ninth to tie the game at 13, only to see the Matadors walk off in the bottom of the inning. The Valpo offense continued to thrive, scoring 11 runs or more in three of the four games and racking up no fewer than 12 hits in any of the four contests.

On the Air: A free video stream of both games will be available courtesy of Big West TV. The games will also have live stats.

Series Notes: Tuesday will be the first ever meeting between the two teams.

A Happy Homecoming: Jayden Eggimann made sure his trip to his home state ended on a high note, as the Mesa, Ariz. native slugged a three-run homer to highlight a six-run ninth inning for Valpo on Sunday against Grand Canyon, the team Eggimann played for his freshman season. The prosperous inning snapped a 5-5 tie and helped Valpo to an eventual 11-7 win. Eggimann's long ball was his first of the season and the third of his Valpo career, and his five RBIs in the game marked a career high. He now owns the team lead in RBIs with 14 and has already driven in more runs than he did all of last season in 30 fewer at-bats.

Offense Keeps Surging: It was another noteworthy week for the Valpo offense, as the Crusaders now own a .339 batting average that ranks 11th nationally despite being a cold-weather team that has played nearly all warm-weather opponents thus far this year. Nine players are hitting .294 or better, led by newcomer Blake Billinger, who is hitting .444 with a .733 slugging percentage. Billinger is tied for sixth nationally with seven doubles, three of them coming in one game against CSUN on Friday, allowing him to become the first Crusader since 2008 with three doubles in a contest.

Home Sweet Home: Valpo has a long history of success recruiting the state of California, making this week's trip to the Golden State a special one on many levels. Valpo has 11 players on the active roster that hail from California, plus a large alumni base within the state. The Crusaders play two games at UC Riverside on Tuesday and Wednesday before meeting Loyola Marymount for a three-game weekend series.

Debut Day: Freshman left-handed pitcher Josh Currier will make his first collegiate start on Tuesday against UC Riverside. Currier, whose sister Kayla is a member of the Valpo volleyball team, comes with a unique backstory after being cut from his high school baseball team as a junior. He put in the work to make the improvement necessary to earn a spot on a Division I roster following his senior season. Currier has thrown one inning so far this season, allowing one run on one hit in the ninth of a 20-6 victory over Holy Cross on Feb. 24.

Defense Wins Championships: The Valpo offense has received plenty of attention this season – and deservedly so – but the Valpo defense has been outstanding as well. Valpo ranks atop The Valley in field percentage at .979 after breaking a program record that had stood since 1998 by finishing with a .971 fielding percentage in 2017.

In The Other Dugout – UC Riverside: The Highlanders were swept by San Francisco in a Sunday doubleheader, dropping the first game 2-1 and the second game 4-1. Riverside is under the direction of Troy Percival, a name familiar to any baseball fan as he finished his big league career with 358 saves, ninth in MLB history. He spent 14 years in the big leagues, 10 of them with the Angels, and nailed down the save in Game 7 of the 2002 World Series against the Giants. Percival’s son Troy is a freshman RHP at UC Riverside. The team is led by Colby Schultz (.342 AVG) and Dean Miller (.341 AVG), while Connor Cannon is their leader in the power categories with three home runs and 10 RBIs.