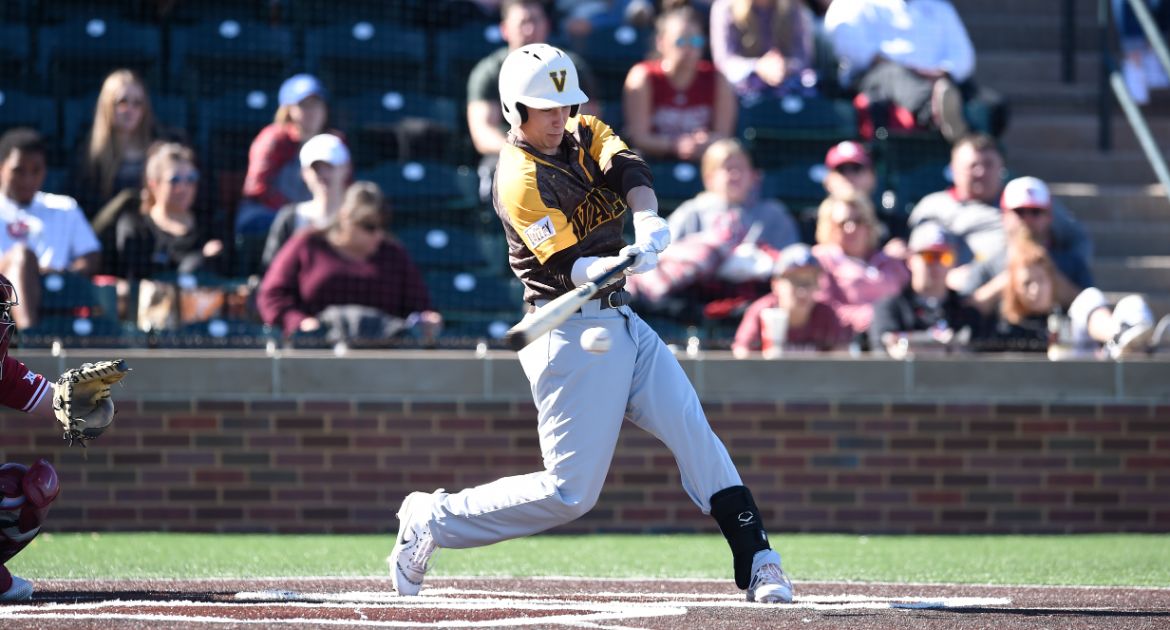 Next Up in Crusader Baseball: The Valparaiso University baseball team has returned from its spring trip to California, but soon enough the Crusaders will be on the road again as they make their way to Pine Bluff, Ark. to begin a three-game weekend series with Arkansas Pine Bluff. The Crusaders and Golden Lions will play a single game on Friday followed by a Saturday doubleheader.

Last Time Out: The Crusaders dropped all three games at Loyola Marymount this past weekend including a doubleheader sweep at the hands of the Lions on Sunday. LMU captured a 7-4 win in the first game before coasting to a 15-5 triumph in the nightcap. Valpo also fell in Friday’s series opener 10-3 before Saturday’s scheduled contest was wiped out by rain, necessitating the Sunday doubleheader.

On the Air: Live stats will be available on ValpoAthletics.com and Twitter updates will be provided from @ValpoBaseball.

Series Notes: This weekend will mark the first ever games between the two teams.

Hoosier Hitters: A pair of local players have been key cogs in Valpo's offense as juniors this season. Both have carried over late offensive surges a year ago into the first 15 games of this year. Chesterton, Ind. native and Andrean High School graduate Chase Dawson is second on the team in batting average at .361 after hitting .253 as a freshman and .264 as a sophomore. Dawson finished last season hitting .364 over the final month (April 23-May 24) in 16 games, leading the team in batting average and on-base percentage (.517) during that stretch. Catcher Scott Kapers has always been a standout behind the plate, and now the offense has come around for the Schererville, Ind. native. He hit just .196 as a freshman before improving to .268 as a sophomore. Now, the Valpo junior owns a .352 average that ranks third on the team. Like Dawson, Kapers' 2018 success at the dish was sparked by a strong finish to 2017, when he hit a team-high .378 over the final 14 games after entering that stretch with a .231 average.

Putting it in Play: Although Valpo dropped the first game of Sunday's doubleheader at Loyola Marymount 7-4, the Crusaders added another line to their list of offensive feats this season in that game. They did not have any strikeouts, as LMU recorded all 27 outs on balls put in play. This marked the first time since April 26, 2014 that Valpo went an entire game without striking out. Ironically, the Crusaders also lost that game, 5-1 to UIC.

Powerful Punch: The Crusaders have some pop in their bats this season as they've already slugged 14 home runs in just 15 games. For comparison, Valpo finished the entire 2015 season with just 15 home runs. Sam Shaikin leads the team with three home runs after hitting four in his first two seasons combined, all of them coming as a sophomore last year. Five Crusaders have multiple long balls and eight have at least one.

Crusaders Among League’s Offensive Leaders: The Crusaders have players among the Top 5 in The Valley in numerous offensive categories. Zack Leone ranks fourth in batting average at .390 and second in on-base percentage at .510. Chase Dawson’s 26 hits are tied for second most in the conference, while Blake Billinger is tied for the league lead with seven doubles.

Providing Relief: Left-hander Chet Joslyn has provided some much needed quality relief out of the Valpo bullpen this season. He had a 7.88 ERA in 16 innings a year ago, but this year has been a bright spot on the Valpo pitching staff, allowing just two earned runs on five hits in 6 1/3 innings for a 2.84 ERA, the only ERA on Valpo’s staff under 4.00.

Garbella Back in Action: After missing nine games due to injury, Giovanni Garbella returned to the lineup this past weekend against Loyola Marymount. He has hit safely in all six games he’s played this season and owns the team’s longest hitting streak. He had five RBIs in Sunday’s doubleheader against the Lions.

Lutgen Goes Yard: Valpo sophomore Blake Lutgen slugged his first career home run on Sunday at Loyola Marymount. It came in just his 16th career at-bat and his fourth at-bat of the season. That also marked the second hit of Lutgen’s Crusader career.

In The Other Dugout – Arkansas Pine Bluff: The Golden Lions have already begun conference play, winning two of three from Southern in their first weekend of SWAC action before dropping two of three this past weekend to Grambling State. Arkansas Pine Bluff is under the direction of Carlos James, who is in his eighth season at the helm. He guided the team to three straight SWAC crowns in 2014, 2015 and 2016. The Golden Lions are led by Ryan Mallison, who is hitting .389 in 11 games. Jacob Columbo holds a .343 average in 10 games, while Sergio Esparza leads the way in the power categories with three home runs and 12 RBIs.