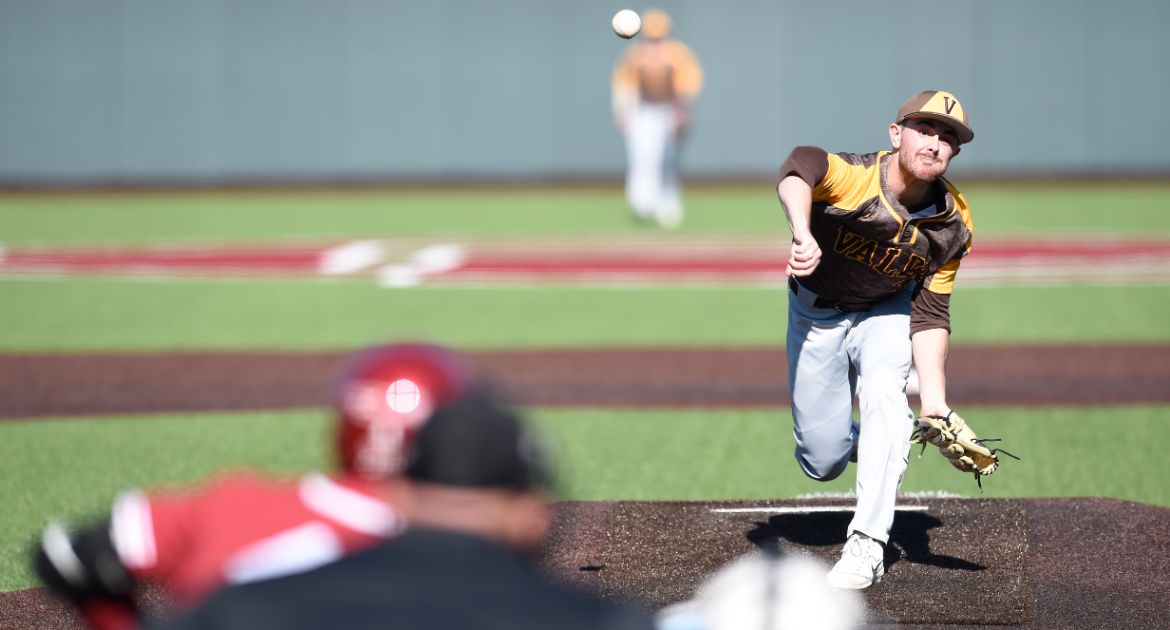 Next Up in Crusader Baseball: A storied history across all athletic platforms between two Indiana institutions will continue this weekend. The Valparaiso University baseball team will take the diamond for a three-game series at Butler’s Bulldog Park beginning on Friday, marking the first time Valpo and Butler have played in baseball since 2014 and renewing a long history between the in-state rivals.

Last Time Out: The Crusaders continued to thrive offensively in this past weekend’s three-game series at Arkansas Pine Bluff. A Chase Dawson grand slam helped Valpo cruise to a 14-7 victory in Friday’s opener, while Zack Leone drove in seven in a 12-8 win in the series finale on Saturday. The first game of Saturday’s twinbill belonged to Arkansas Pine Bluff 6-5 as the Golden Lions rallied for the victory. This marked Valpo’s first series win of the season.

On the Air: The first game of the series will have a video stream available via Facebook Live courtesy of Butler Athletics. The Saturday and Sunday game will have a Valpo radio broadcast with Brandon Vickrey doing play-by-play. The link to the online video and audio stream can be found on ValpoAthletics.com. Live stats are also available for all three games.

Series Notes: The Crusaders have the upper hand in the all-time set with their rivals from Indianapolis, holding a 78-54-1 all-time record against Butler. The 78 wins are the most Valpo has racked up against any one opponent in program history. The Bulldogs won the most recent game 5-3 on March 30, 2014. The Crusaders swept the Bulldogs at Emory G. Bauer Field in 2012, the last series between the two teams before Butler left the Horizon League. Current seniors were not yet in college in 2014, so this will mark the first taste of a Valpo-Butler matchup for everyone on the Crusader roster.

Leone Lighting It Up: If the question was whether Zack Leone's success at the Division III level would carry over to Division I Valparaiso, the answer has been a resounding yes so far this season. Leone posted eye-popping numbers at Susquehanna, where he was named an All-American by D3Baseball.com & the ABCA. He finished his Division III days with a career batting average of .405 that ranks second in program history, 112 RBIs (second all-time), 49 doubles (program record) and 18 home runs (second all-time). He's managed to post an even better batting average through the first 14 games of his Crusader career, as he stands at .446 to go along with one home run, three doubles and 16 RBIs. He has multiple hits in half of the games he's played this season and has already racked up five or more RBIs in a single game twice this year.

Garbella Getting Hits: Senior outfielder Giovanni Garbella is back in the lineup after missing nine games due to an injury, and his bat hasn't skipped a beat. He has hit safely in all nine games he's played this season, the longest hitting streak on the team. Garbella is hitting .324 with three home runs and 10 RBIs, continuing the offensive success he experienced late last season. He's one of many examples of Valpo players who have made drastic improvement over the course of their Crusader careers. He entered April 9 of last season hitting .213 with no home runs and eight RBIs in 26 games and was a career .204 hitter over three years. He hit .380 the rest of the way with five home runs and 24 RBIs over the final 25 games of the season.

In The Other Dugout – Butler: Entering their midweek contests on Tuesday at Dayton and Wednesday vs. DePauw, Butler is off to a 15-3 start to the season. The Bulldogs took two of three from Western Michigan this past weekend. Their leading hitter is Garrett Christman at .351 in 18 games, followed closely by Tyler Houston at .346. Christman is a two-way standout as he owns a 2.70 ERA in five starts as the team’s Saturday starter. Connor Mitchell has been the ace of Butler’s staff and owns a sparkling 2.08 ERA and 2-0 record in five starts. He has struck out 34 and issued just five walks in 30 1/3 innings. Ryan Pepiot is 3-0 with a 5.01 ERA and is expected to get the Sunday start. Butler is under the direction of second-year coach Dave Schrage, who guided the team to a 31-20 overall record in his first season. It was the first winning year for Butler in 13 seasons and just the fifth time in school history that the Bulldogs reached 30 wins. Butler freshman pitcher Ryan Schmit went to Prairie Ridge, also the alma mater of Jon Tieman. Freshman pitcher Joe Graziano is a Schererville, Ind. native and Lake Central High School product.