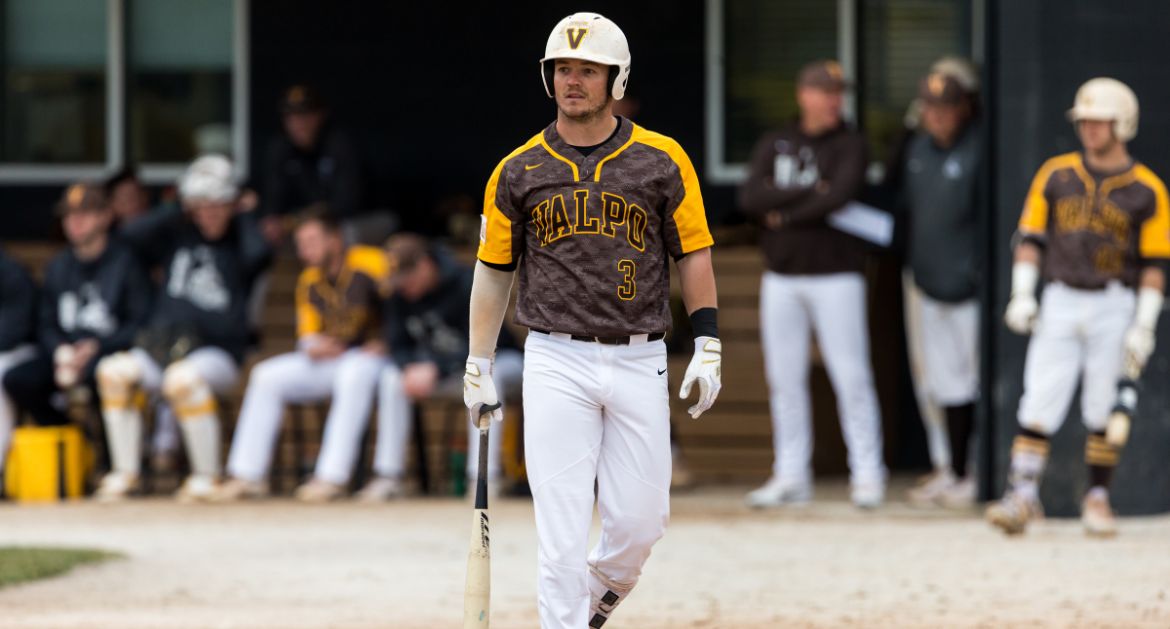 Next Up in Crusader Baseball: The Valparaiso University baseball team will continue a stretch of games against instate opponents on Wednesday night in West Lafayette. After taking on Butler and Ball State in their last two games, the Crusaders will face off with Big Ten foe Purdue. Valpo has won back-to-back meetings with Purdue for the first time since 1977 after beating the Boilermakers each of the last two seasons.

Last Time Out: The Crusaders scored five times in the seventh inning in Monday’s home opener against Ball State, but it was too little, too late after the visitors had scored the first 12 runs of the contest. The Cardinals went on to win 13-5. Sam Shaikin was the lone Crusader with a multi-hit game, while Christian Barczi slugged his first home run of the season and the second of his career. Valpo was hurt by strikeouts, as the Crusaders had 15 batters go down on strikes, their most since March 5, 2016 (16 at Louisiana Tech).

On the Air: The game will air on BTN Plus ($$$) and on Purdue radio. Links to live video, audio and stats are available on ValpoAthletics.com.

Series Notes: The Crusaders trail the all-time series with their instate foes 66-20, but they have won this matchup each of the last two seasons. Last year, Valpo went to West Lafayette and came away with a 5-1 victory, the Crusaders’ first win at Purdue since 1977, snapping a 27-game losing streak in games played there. Chad Jacob led the way with three hits, while Sam Shaikin contributed two. The year prior, the Crusaders outslugged the Boilermakers 13-10 at Emory G. Bauer Field. Chet Joslyn picked up the win in relief in that one. Purdue hasn’t beaten Valpo since May 12, 2015. This is the 87th meeting between the two teams, and a Valpo victory would give the Crusaders their first-ever three-game winning streak in the head-to-head series.

Series Highlight: The most memorable meeting between Valpo and Purdue came on June 1, 2012, when the Crusaders fell 7-2 in an NCAA Regional game played at U.S. Steel Yard in Gary. The Crusaders made their first NCAA Tournament appearance since 1968. The game was slated to start at 7 p.m., but did not get underway until after 10:30 and lasted until nearly 1 a.m. The reason for the late start was the previous game, as Kent State and Kentucky went to 21 innings with Kent State pulling out at 7-6 win.

Pitching Matchup: This contest is slated to see a pair of lefties toe the rubber as Valpo’s Jarrett Hammel pitches against Purdue’s Ryan Beard. Hammel will make his first start in a Valpo uniform and owns a 6.94 ERA and 1-0 record in 10 appearances out of the bullpen. The sophomore southpaw has issued six walks and struck out five in 11 2/3 innings. He came to the Crusaders this year after starting his collegiate career at Division II Saint Joseph’s College, which closed its doors following the 2016-17 academic and athletic year. Beard, a junior, is also in his first year at Purdue after posting a 0.84 ERA a year ago at the College of Southern Idaho. That ERA was best in all of NJCAA Division I through the end of the 2017 regular season. He was the Region 18 Pitcher of the Year and a first team all-conference honoree. Beard owns a 5.40 ERA and 0-1 record in five games, four starts. He has worked 15 innings and has seven walks against nine strikeouts.

In The Other Dugout – Purdue: The Boilermakers are coming off a doubleheader split vs. Lipscomb a week ago at Alexander Field. The third game of the series was cancelled due to unfavorable weather. The 6-2 win in the second game of that twinbill snapped a seven-game losing streak. Purdue’s leading hitter is Skyler Hunter at .370, followed closely by Nick Dalesandro at .360. Both have started all 20 games this season. Purdue is under the direction of second-year coach Mark Wasikowski, who guided the team to a 19-win improvement in his first season.