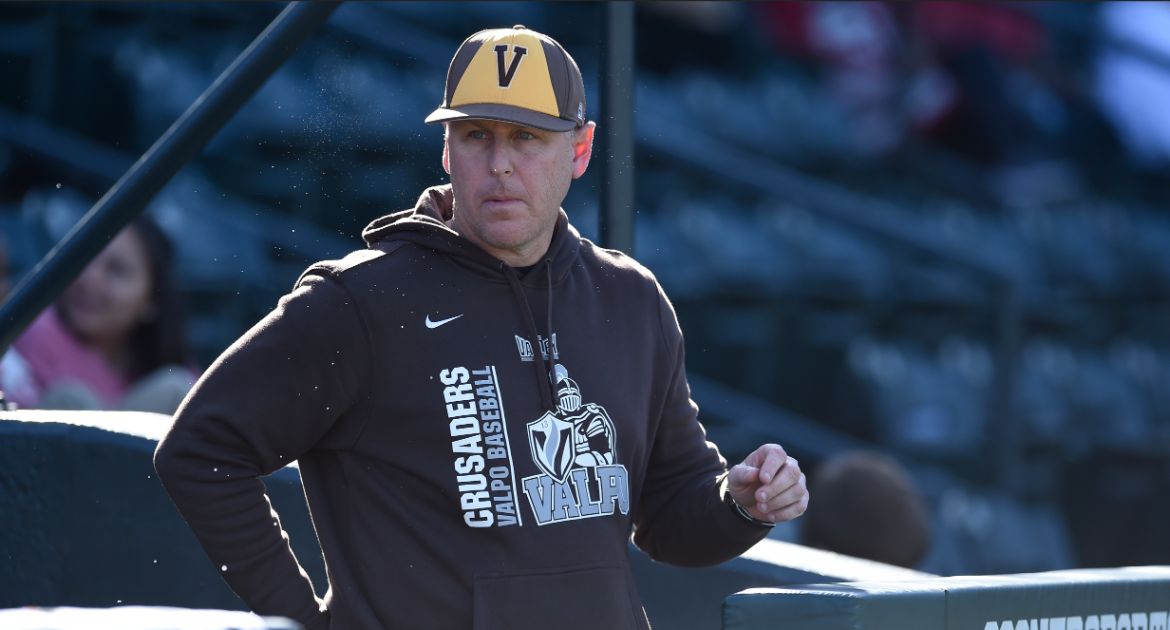 Next Up in Crusader Baseball: The Valparaiso University baseball program will begin the Missouri Valley Conference era this weekend by hosting Bradley for a three-game Easter Weekend series at Emory G. Bauer Field. The University joined the MVC as a full-fledged member on July 1, 2017 after 10 years in the Horizon League.

Last Time Out: The Crusaders didn’t scratch out their first hit until Chad Jacob doubled with two outs in the seventh in Wednesday’s 4-1 loss at Big Ten foe Purdue. Jacob crossed the dish on a sharp single through the left side by Scott Kapers to end Boilermaker starting pitcher Ryan Beard’s strong outing. Valpo later brought the tying run to the plate in the ninth inning, but Ross Learnard nailed down the save for Purdue. Alex Dirienzo threw 1 2/3 scoreless innings in relief of Jarrett Hammel, who was hit with the loss after allowing two runs (both unearned) on two hits and two walks in 2 1/3 innings. Valpo finished with four hits and Jacob’s two-bagger was the only extra-base knock for the Crusaders.

On the Air: All three games in the series will air on 95.1 FM Valparaiso with the audio available online via the TuneIn Radio app. Ben Ariano will have the play-by-play on Friday and Saturday, while Korey Schrock will describe the action on Sunday. Links to live audio and stats are available on ValpoAthletics.com.

Series Notes: The all-time series has been a competitive one, with Bradley holding a narrow 13-11 lead in a matchup that first occurred in 1991. This will mark the first Valpo/Bradley baseball showdown since 2009, a game Valpo won 5-2 at Emory G. Bauer Field.

Opening An Era: The last time the Valpo baseball team played its first game in a new conference was March 21, 2008, a doubleheader at Wright State. The Crusaders split that twinbill, winning the opener 6-5 before falling 8-7 in 10 innings in the second game. Head coach Brian Schmack is the only person who will be in attendance on Friday who was also there for Valpo’s initial games in the Horizon League, as he then served as the pitching coach under Tracy Woodson.

In The Other Dugout – Bradley: The Braves were picked to finish in sixth of eight in the Missouri Valley Conference preseason poll. Bradley finished last season at 20-31 overall and 16-14 in conference play. They went two-and-out in the MVC Tournament, falling to Dallas Baptist and Evansville. Head coach Elvis Dominguez has been in charge of the program for nine seasons. Bradley has played several foes who are receiving national attention this season, falling 6-5 at No. 19 UCF on March 13 after picking up a 10-7 win over No. 29 Georgia Tech on Feb. 17. Bradley’s most recent game was a 13-9 loss at Iowa on Wednesday that came on a walk-off grand slam. The Braves took a 9-8 lead to the eighth inning against the Hawkeyes. Valpo is expected to see LHP Cole Cook (2-3, 5.47), RHP Ryan Hodgett (0-1, 3.68) and RHP Sam Lund (3-0, 2.74) in this series. Bradley is led offensively by Brendan Dougherty (.391) and Luke Mangieri (.379), while Derek Bangert has a team-high 21 RBIs.