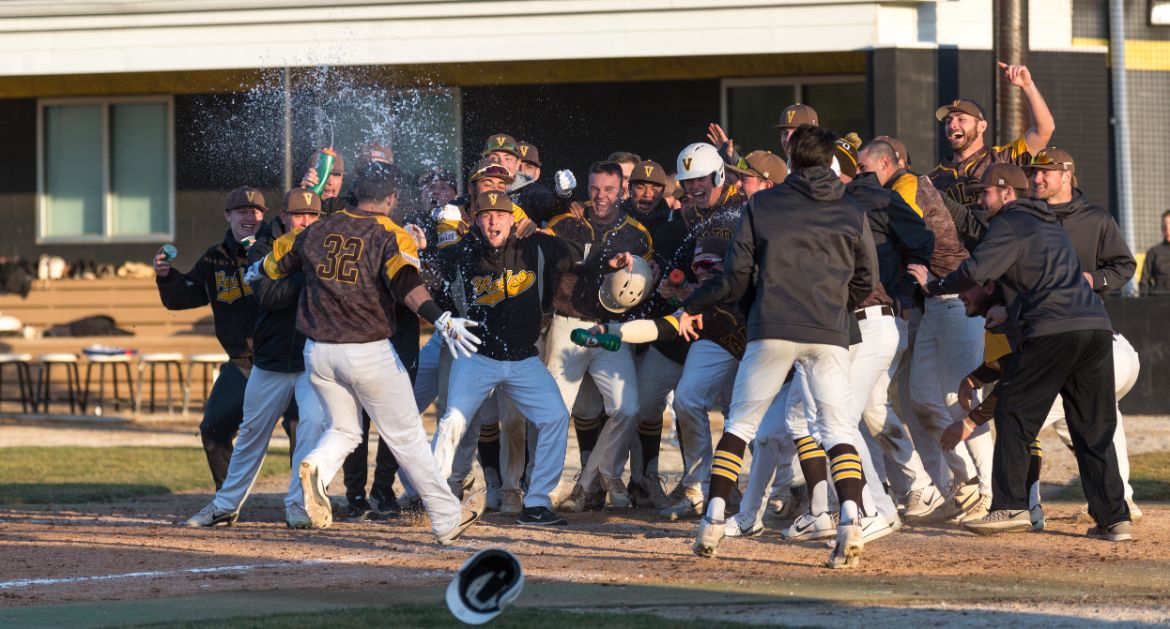 A day that started with the Valparaiso University baseball team embarking on its maiden voyage in the Missouri Valley Conference ended fittingly, with senior first baseman Zack Leone (Pelham Manor, N.Y. / Fordham Prep [Susquehanna]) ripping a three-run, walk-off home run to beat Bradley 5-2 in 10 innings in the second game of a doubleheader.

The Crusaders’ tenure in The Valley began with something that didn’t happen in any of Valpo’s 10 seasons in the Horizon League – a walk-off home run. No player or coach had experienced a walk-off long ball in a Valpo uniform before Leone’s blast that sent the Crusaders home happy after a long day of baseball at Emory G. Bauer Field. Not even Brian Schmack, who has been with the program since 2007, had seen a Valpo walk-off homer, as this marked the first in over 15 years.

Valpo enjoyed being on the other end of a walk-off, laying to rest the ghosts of the program’s recent history. Three of the Crusaders’ first five losses this season came in walk-off fashion, while Valpo has been hurt by walk-off home runs in the past as well – most recently last year’s season opener at Western Kentucky and most notably a 2013 NCAA Tournament game against Indiana.

But Saturday was about the present for Leone and the Crusaders (8-15, 1-1), who salvaged a doubleheader split with the visiting Braves (13-7, 1-1). Bradley used a late rally of its own to win the opener 5-4, causing Valpo to drop to 0-7 in one-run games this season.

Leone’s long ball was his second of the year and allowed him to lift his RBI total to 22, 20 of which have come with two outs. The Crusaders would never have been in position for Leone’s extra-inning heroics if it weren’t for Giovanni Garbella (San Diego, Calif. / Cathedral Catholic), who ripped a two-run double to center in the eighth to tie the game at two. Garbella nearly ended the game himself in the bottom of the 10th as he smoked one down the left-field line that would have been long gone had it stayed fair, but the drive curled foul and the Valpo senior eventually went down on strikes.

Before Garbella’s eighth-inning two-bagger, single Bradley tallies in the fourth and seventh were the only runs of the game. Valpo starting pitcher Trey Ferketic (Laguna Niguel, Calif. / JSerra [UC San Diego] worked well, limiting Bradley to two runs on five hits and one walk over seven innings. The Valpo bullpen did its job as Easton Rhodehouse (Gilbert, Ariz. / Highland) and Jarrett Hammel (Brook, Ind. / South Newton [St. Joseph’s College]) combined for three innings of scoreless relief. Hammel (2-1) got the five outs leading up to the walk-off and allowed just one hit, earning the win.

Bradley starter Ryan Hodgett walked four but permitted only one hit over five frames. Ben Cilano (1-1) was handed the loss in relief after being victimized by the Leone homer. Before the game’s final pitch, three players had combined for all six of Valpo’s hits with Blake Billinger (Los Gatos, Calif. / St. Francis [Mission]), Riley Dent (Long Beach, Calif. / Wilson) and Garbella owning two hits apiece. For the first time this season, Valpo prevailed when trailing after seven innings. The Crusaders were previously 0-12 under those circumstances.

The first game saw the Crusaders jump ahead 2-0 on a Leone run-scoring single and Chad Jacob (Irvine, Calif. / Woodbridge) RBI double in the first inning, but the bats went quiet after that. Bradley manufactured a run in the third, scored an unearned tally in the fourth and grabbed the lead on a Brendan Dougherty single in the fifth.

The Crusaders got back to even on a Jacob sac fly in the sixth, then Leone ripped a run-scoring double to center in the eighth to give Valpo a 4-3 lead and put the Crusaders within three outs of a victory. Bradley scored twice in the top of the ninth against Alex Dirienzo (0-1), and an RBI single by Doherty put the Braves up for good.

The Crusaders and Braves will go at it one more time this weekend at Emory G. Bauer Field. The third game in the series is tentatively scheduled for Saturday at 1 p.m. CT, but there is a possibility of rain in the forecast. Stay tuned for information on a potential schedule change.