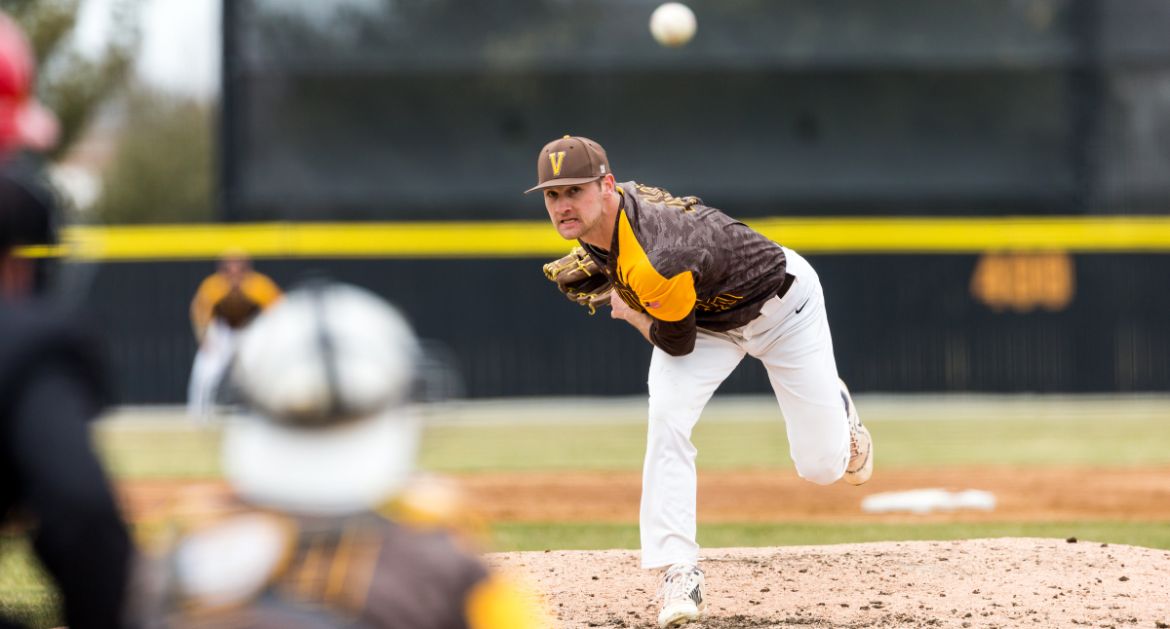 Next Up in Crusader Baseball: The Valparaiso University baseball team will play its lone home contest over a 12-game stretch on Wednesday afternoon as the Crusaders welcome former Horizon League foe Milwaukee for a midweek matchup. The game will take place on the University’s annual Valpo Day.

Last Time Out: The Crusaders dropped two of three at Southern Illinois this past weekend in their first road series as a member of the Missouri Valley Conference. After suffering a 6-2 setback in Friday’s opener, the Crusaders flipped the script to beat the Salukis 6-2 on Saturday behind a complete game by starting pitcher Trey Ferketic. Valpo dropped a rubber match for the second straight Sunday, losing 8-0 with seven of Southern Illinois’ eight runs coming in the fifth inning.

On the Air: Wednesday’s game will be broadcast on 95.1 FM Valparaiso and online via the TuneIn Radio app with Ben Ariano calling the play-by-play. Live stats will also be available.

Series Notes: Valpo holds a 32-39 all-time mark against their former Horizon League adversaries. The Crusaders swept all three meetings from the Panthers a year ago, taking both ends of a doubleheader on May 13 at Henry Aaron Field before winning a single game at Emory G. Bauer Field the following week. The two teams were scheduled to play twice more to close out the regular season in Valpo, but inclement weather prevented those games from taking place. The Crusaders have a four-game winning streak over the Panthers dating back to 2016. Chase Dawson (4-for-7) and Scott Kapers (6-for-12, 4 RBIs) both had success against Milwaukee last season. Dawson is hitting .391 in nine career games against the Panthers.

Going the Distance: Valpo starting pitcher Trey Ferketic hurled a 130-pitch complete game in the middle game of this past weekend’s series at Southern Illinois, limiting the Salukis to two runs on two walks and nine hits while striking out seven. Ferketic became the first Crusader to throw a complete game since April 23, 2017, when Ellis Foreman went the distance in a 9-0 win over Wright State.

Five-Hit Day: Blake Billinger racked up five hits in Valpo’s 6-2 win over Southern Illinois on Saturday. He became the second Valpo hitter to post a five-hit game this season, joining Chase Dawson, who went 5-for-6 against CSUN on March 2, a 14-13 loss. Valpo has two five-hit games this season after having one (Nolan Lodden, 2016) in the previous seven years combined. Furthermore, Billinger became the first Crusader since Justin Frane on April 3, 2010 against Chicago State to go 5-for-5 in a game.

More Billinger ‘Bits: With leading hitter Zack Leone sidelined by an injury, Blake Billinger stepped up in a big way in the three-game series at Southern Illinois. The Valpo left fielder boosted his season batting average to .374 by clubbing .769 (10-for-13) in the weekend series. He and Chase Dawson combined for all five of Valpo’s hits in Sunday’s series finale, three of which belonged to Billinger. The junior college transfer has a team-leading 14 multi-hit games and also leads the club with four three-hit contests. Billinger ranks second in The Valley in doubles with 13, behind only Dallas Baptist’s Jameson Hannah (14).

About the Pitching Matchup: A pair of lefties are expected to take the mound on Wednesday as Valpo’s Michael Mommersteeg pitches opposite Milwaukee’s Alex Fischer. Mommersteeg will make his second start of the season and first since March 4 at Grand Canyon. He worked 3 2/3 innings and allowed five runs on seven hits in his most recent outing on March 26 vs. Ball State. This will be his seventh appearance of the year. He has one save and an 11.94 ERA in 17 1/3 innings thus far. Fischer is 1-1 with a 6.75 ERA in seven games, one start. He has worked 10 2/3 innings. Fischer started against the Crusaders on May 13 of last season in Milwaukee, taking the loss after allowing three runs on five hits and three walks in two innings.

Triple Time: Valpo’s Chase Dawson notched his fourth triple of the season on Sunday at Southern Illinois. He took over sole possession of the MVC lead with four triples on the season. In the process, the Valpo junior became the first Crusader since Andy Burns in 2013 to have four triples in a single season.

In The Other Dugout – Milwaukee: The Panthers stand at .500 in Horizon League play after winning series against Youngstown State and Northern Kentucky and dropping series to Wright State and Oakland. The Horizon League is back to six teams with each club playing the other five teams six times apiece with Valpo’s departure as IUPUI does not have baseball. Milwaukee lost 9-6 at then No. 24 Illinois on March 14, a team Valpo will see in midweek action next week. The Panthers are led by Mike Ferri, who is hitting .337 in 22 games. The team’s top RBI man is Tyler Bordner with 20. The head coach of the Panthers is Scott Doffek, who is in his 12th year at the helm and 24th on Milwaukee’s staff. The Panthers are the only Horizon League team on Valpo’s schedule, while Milwaukee will play another MVC squad in Illinois State later this season.