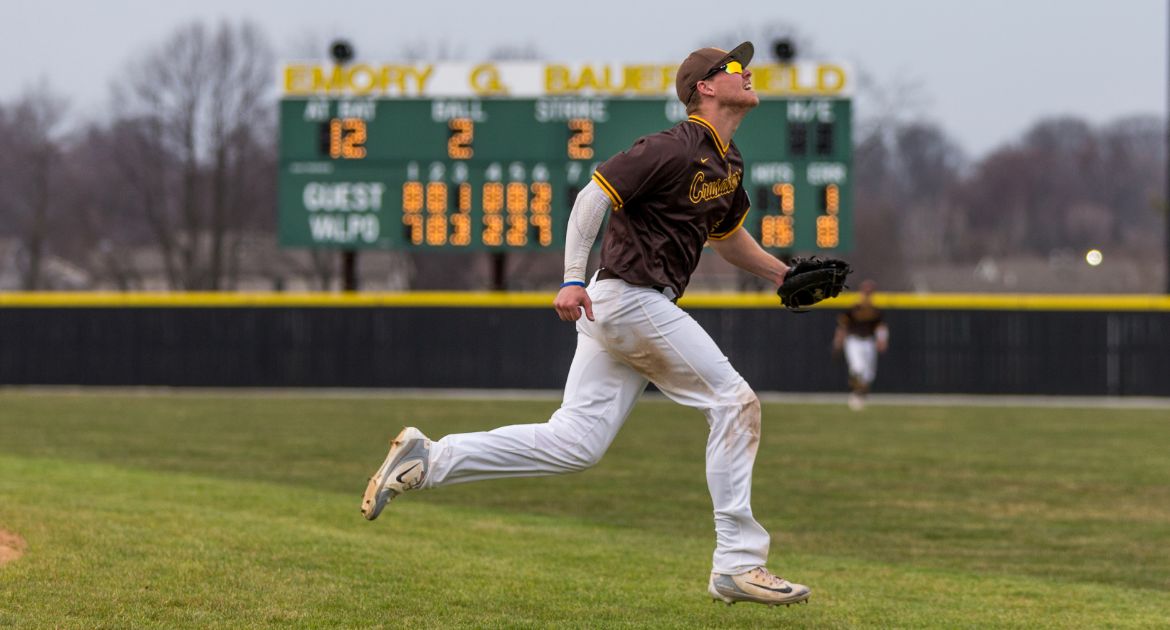 Blake Billinger is hitting .352 in his first year as a Crusader.
Valparaiso at #25 Illinois | April 17, 2018
Related Links
Related Links

Next Up in Crusader Baseball: The Valparaiso University baseball team will play its third Big Ten opponent of the season on Tuesday night in Champaign, colliding with an Illinois team that has been nationally ranked at various points in the year. The Crusaders and Fighting Illini will get together for the first time since 1981.

Last Time Out: The Crusaders dropped to 0-8 in one-run games and suffered their fourth walk-off loss of the year in Game 1 of Friday’s doubleheader at Michigan State, falling to the Spartans 5-4 in 12 innings. Michigan State scored single tallies in the seventh and eighth innings to tie the game at four, then neither team scored again until Justin Antoncic’s game-ending single in the 12th. Valpo gained its first one-run win of the year in the nightcap, coming from four runs down to beat Michigan State 7-6. Trey Ferketic allowed six runs (four earned) over the first three innings, but did not permit the Spartans to score for the game’s duration in a complete-game victory.

Beating Big Ten Competition: After dropping the first game of Friday's doubleheader at Michigan State in 12 innings, Valpo picked up a 7-6 win in the nightcap. This marks the third straight season Valpo has beaten a team from the Big Ten Conference, as the Crusaders knocked off instate foe Purdue each of the last two years. It was also Valpo's first one-run win of the season, as the Crusaders were previously 0-8 in games decided by the slimmest of margins.

Tuesday’s Pitching Matchup: Lefty Michael Mommersteeg will make a midweek start for the second consecutive week after holding Milwaukee to three runs on six hits over six innings to notch his first victory of the season a week ago, a game Valpo went on to win 23-5. Illinois will give the ball to Ryan Schmitt, a right-hander who will make his second start and 11th appearance. He is 1-1 with a 5.48 ERA over 21 1/3 innings.

Going the Distance: Valpo starting pitcher Trey Ferketic hurled a 130-pitch complete game on April 7 at Southern Illinois, limiting the Salukis to two runs on two walks and nine hits while striking out seven. Ferketic became the first Crusader to throw a complete game since April 23, 2017, when Ellis Foreman went the distance in a 9-0 win over Wright State. He followed that with a second consecutive complete game on April 13 at Michigan State, earning the win to improve to 4-2 after scattering 11 hits and allowing six runs (four earned). After permitting six runs in the first three innings, Ferketic did not allow a run over the final six frames. He became the first Valpo player since Trevor Haas in 2016 to throw consecutive complete games. Ferketic owns both of Valpo’s complete games this season, two of the three that have taken place over the last two years and becomes the first Crusader since Dalton Lundeen and Trevor Haas in 2016 with multiple complete games in a season.

Tough-Luck Loss: Right-handed reliever Alex Dirienzo may have taken the loss in Friday’s extra-inning defeat at Michigan State, but his effort out of the bullpen gave the Crusaders ample opportunities to win the game. Dirienzo put goose eggs on the board in the ninth, 10th and 11th before allowing the Spartans to scratch out a run on three hits in the 12th. Dirienzo has allowed just three runs in 12 innings (2.25 ERA) since making his season debut on March 16 after missing the early portion of the season with an injury. The former Akron infielder has become Valpo’s most reliable option out of the bullpen.

Leaving Them Stranded: In Friday’s Game 1 loss at Michigan State, the Crusaders left 15 runners stranded on base. That marked the most they’ve left on in a game since leaving 17 on May 13, 2016 at Youngstown State, also the first game of a twinbill.

Runs Upon Runs: The Crusaders enjoyed their most prosperous offensive showing since April 2, 2010 in Wednesday’s 23-5 win over Milwaukee. That marked Valpo’s highest run total since scoring 26 runs against Chicago State eight years ago. In addition, Valpo has reached the 20-run mark twice this season (W 20-6 vs. Holy Cross on Feb. 24) after not scoring 20 runs in a game in any of the previous seven seasons. Valpo had 18 hits in the win over the Panthers, equaling a season high set on March 3 at Grand Canyon.

Eggimann’s Extraordinary Effort: Jayden Eggimann launched a grand slam, a two-run triple and an RBI single in Wednesday’s win over Milwaukee, becoming the second Valpo player this season to drive in seven runs in a game. Only four players in the entire Missouri Valley Conference have enjoyed seven RBI games this year, and two of them are Crusaders as Zack Leone drove in seven on March 17 at Arkansas Pine Bluff. Eggimann also became the second Valpo player to hit a grand slam this year, joining Chase Dawson (March 16 at Arkansas Pine Bluff).

Driving in Seven: Eggimann and Leone have joined a list that includes four other Valpo players who have had seven or more RBIs in a Valpo game over the last 10 years. Jake Hanson had eight RBIs against Oakland on May 15, 2016, and a pair of Crusaders enjoyed seven RBI outputs in 2015 – Dustin Beasley (March 3 at Western Carolina) and Nate Palace (March 7 at USC Upstate). Before that, no Valpo player had seven RBIs in a game since Steven Scoby on April 14, 2010 against IU Northwest.

Grand Slam Tracker: Like many offensive areas, Valpo has seen a considerable uptick in grand slams over the last four seasons. Valpo had one total grand slam from 2009-2014, and now has eight from 2015-2018.

RBI Machine: Eggimann has climbed into the team lead with 28 RBIs out of the No. 9 spot in the batting order. He is tied for fifth in the Missouri Valley Conference in that area. The other five players in the top six in the league in RBIs all hit in the top four in their respective batting orders.

In The Other Dugout – Illinois: The Fighting Illini swept Rutgers this weekend, securing a 10-4 win on Sunday behind a complete game by starting pitcher Ty Weber. That win marked the 400th career triumph for Illinois head coach Dan Hartleb. Illinois has won 22 of its last 27 games and carries a five-game winning streak with it into Tuesday’s affair. Bren Spillane leads Illinois in hitting at .457, while Ben Troike (.336) and Michael Massey (.331) are also above .300. Spillane has crushed 14 home runs and driven in 43. Illinois has already matched its win total from last season in 20 fewer games.