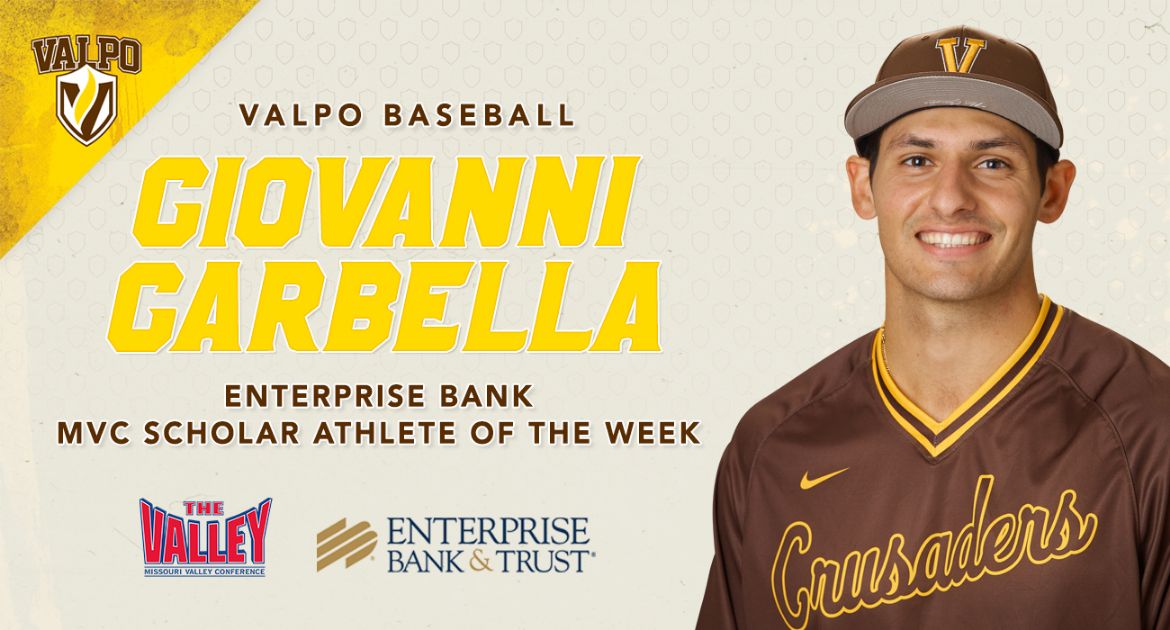 Valparaiso University baseball outfielder Giovanni Garbella (San Diego, Calif. / Cathedral Catholic) has been selected as a Missouri Valley Conference Scholar-Athlete of the Week, presented by Enterprise Bank and Trust Company, for his performance in both the classroom and on the playing field this past week.

Garbella, a finance major, had seven hits in 15 at-bats (.467) while ripping a double and a homer as Valpo took three of four during the week. He drove in six runs in four games and played a key role as Valpo knocked off No. 25 Illinois on Tuesday and then won its first Missouri Valley Conference series since joining the league over the weekend at Evansville.

Garbella had a career-high four hits in the 11-7 victory over the nationally-ranked Fighting Illini on Tuesday, April 17. The Valpo senior also made significant contributions in Friday's 7-2 win over Evansville, launching his team-leading sixth home run of the season, racking up a season-high five RBIs (all in the first two innings) and recording his fifth straight multi-hit game.

To qualify for Missouri Valley Conference Scholar-Athlete of the Week laurels, student-athletes must carry a cumulative grade-point average of 3.20, have completed at least one academic year at a Valley institution and must be at least a sophomore in academic standing. The MVC gives out the honor to one male and one female athlete across all sports each week.

Garbella becomes the first Valpo male athlete in any sport to capture MVC Scholar-Athlete of -the Week honors. He joins a pair of Crusaders who won the MVC Female Scholar-Athlete of the Week award during the winter season – women’s basketball players Dani Franklin and Meredith Hamlet.

For the season, Garbella is hitting .354 with six home runs and 28 RBIs. He is tied for the team lead in home runs and has also clubbed eight doubles.

The Crusaders will be back in action on Wednesday evening as they have a road date with Notre Dame. Valpo returns to conference play this weekend by hosting Dallas Baptist for a three-game series starting at 3 p.m. CT on Friday at Emory G. Bauer Field.