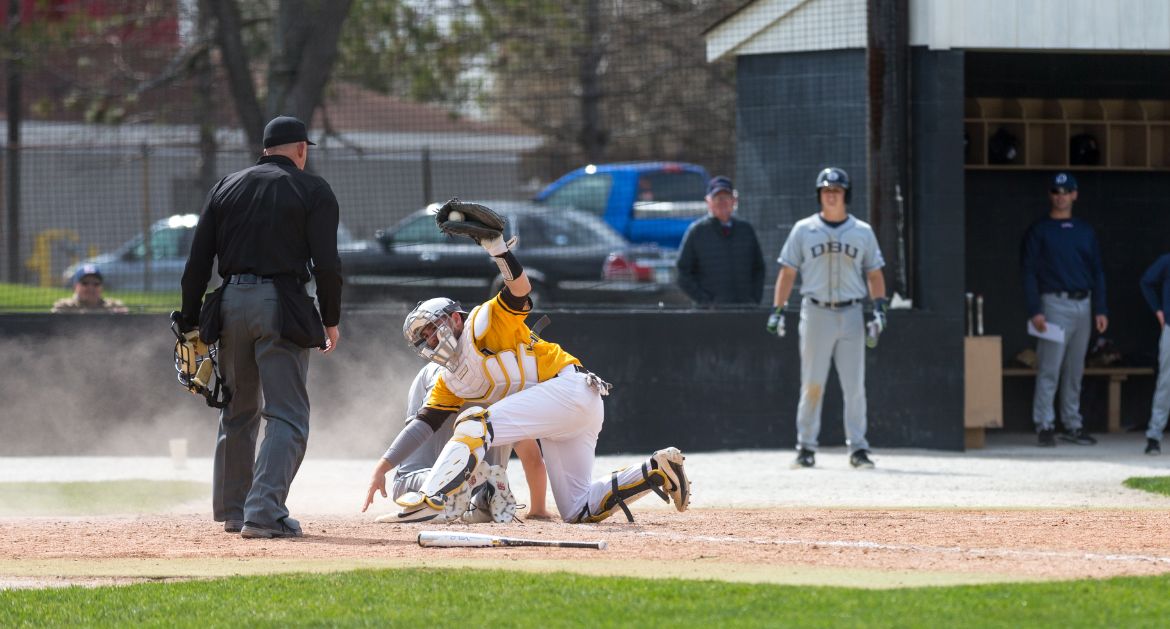 Next Up in Crusader Baseball: After hosting preseason MVC favorite DBU last weekend, the Valparaiso University baseball team continues its challenging slate by welcoming another high-level conference foe to Emory G. Bauer Field. This week, it’s 10-2 Missouri State making its way to Valpo. The Bears were one of two MVC teams to compete in the NCAA Tournament a year ago.

Last Time Out: After knocking off Top 50 RPI opponent DBU by a score of 9-2 on Sunday, the Crusaders suffered a 10-7 midweek setback at the paws of the Northern Illinois Huskies on Tuesday afternoon in DeKalb. The Crusaders faced a 10-0 deficit with six outs left to work with, but then dipped into their bag of comeback tricks with a seven-run eighth to heighten the game’s drama. However, the Crusaders lost despite scoring seven runs in a frame for the second time this season as the unexpected rally fell shy. Blake Billinger had two hits including his 20th double of the season, while Jarrett Hammel, Luke VanLanen and Alex Dirienzo were bright spots out of the bullpen.

On the Air: All three games in the series will air on 95.1 FM Valparaiso, WVUR. Ben Ariano will be joined by Spencer Krock (Friday and Sunday) and Danny Dalenberg (Saturday) on the radio call. The broadcast is also available online via the TuneIn Radio app. Follow @ValpoBaseball for in-game updates. Links to live audio and stats (StatBroadcast) will be available on ValpoAthletics.com.

Series Notes: The Crusaders and Bears haven’t faced off on the baseball diamond since the 1987 season, when the second of two all-time meetings between the two teams took place. The Bears, then known as Southwest Missouri State, won 4-2 in the first game of the Association of Mid-Continent Universities Tournament, which was held in Chicago. The two teams had met two years prior, when Valpo fell 2-1 in that same tournament. Missouri State will make its first ever trip to Valparaiso this weekend.

Billinger Bashing Baseballs: Valpo left fielder Blake Billinger has been a force to be reckoned with at the plate this season. He owns a .451 batting average in Missouri Valley Conference play to lead all Crusaders. In addition, Billinger belted his league-leading 20th double of the season on Tuesday at Northern Illinois, becoming the seventh player in program history and the first since 2010 with 20 doubles in a campaign. There’s still 12 games remaining in the regular season, and Billinger is four doubles away from breaking the single-season program record of 23 set by Kyle Muhlsteff in 2010.

Going the Distance: Wes Gordon threw Valpo's fourth complete-game of the season on Sunday against DBU and became the third different Crusader pitcher to hurl a complete game this year. Weekend starters Jon Tieman, Trey Ferketic and Gordon have all gone the distance, with Ferketic doing so twice. This marks the first season Valpo has had three different pitchers toss a complete game since 2012, a year the team reached the NCAA Regional.

Exceeding Expectations: As a Missouri Valley Conference newcomer that was picked last in the preseason poll, Valpo has exceeded outside expectations thus far this season. The Crusaders have won at least one game in all four conference series and sit in the middle of the pack in the MVC standings. They own five wins in Valley play plus a pair of one-run losses that could easily have the team at 7-5 instead of 5-7.

Almost Only Counts in Horseshoes & Hand Grenades: The Crusaders incurred their 10th one-run loss of the season on April 25 at Notre Dame. Nine of the 10 setbacks have come on the road for a team that has played the bulk of its schedule away from Emory G. Bauer Field. The Crusaders are just 1-10 in one-run decisions with the lone win coming 7-6 over Michigan State in the second game of a doubleheader on April 13.

Six is The Magic Number: Valpo is just 1-20 this season when scoring five runs or fewer. When the Crusaders score six runs or more, they own a 14-4 mark. The only time Valpo came away with a win without reaching the six-run plateau was on March 30 vs. Bradley, a 5-2, 10-inning win. Furthermore, Valpo is 0-13 when scoring fewer than five runs.

In The Other Dugout – Missouri State: The Bears will attempt to rebound from a 9-4 defeat to Kansas on Wednesday night. They took two of three from Bradley last weekend, suffering just their second league loss in the middle game of the series. Drew Milas leads the team in batting average at .340 and RBIs with 47, while Jeremy Eierman and Ben Whetstone have each slugged seven home runs to share the team lead in that area. Eierman ranks third in The Valley with 19 stolen bases and has been caught just three times. Missouri State is under the direction of head coach Keith Guttin, who has held that post since 1983. The Bears have racked up 11 different 40-win seasons during his tenure. Missouri State had its second NCAA Super Regional appearance in the last three seasons a year ago.

Garbella Gains MVC Recognition: Valpo outfielder Giovanni Garbella was selected as a Missouri Valley Conference Scholar-Athlete of the Week, presented by Enterprise Bank and Trust Company, on April 25 for his performance in both the classroom and on the playing field. Garbella, a finance major, had seven hits in 15 at-bats (.467) while ripping a double and a homer as Valpo took three of four during the week. He drove in six runs in four games and played a key role as Valpo knocked off No. 25 Illinois and then won its first Missouri Valley Conference series since joining the league over the weekend at Evansville. Garbella became the first Valpo male athlete in any sport to capture MVC Scholar-Athlete of the Week honors. He joins a pair of Crusaders who won the MVC Female Scholar-Athlete of the Week award during the winter season – women’s basketball players Dani Franklin and Meredith Hamlet.

Welcome to the Watch List: Valpo shortstop Sam Shaikin was named to the Brooks Wallace Award Watch List, which was announced by the College Baseball Foundation on April 19. The honor puts Shaikin in elite company, a group of 53 of the most talented athletes in Division I college baseball. The award honors the nation’s top shortstop and will be presented this summer. The award is named after former Texas Tech shortstop Brooks Wallace, who played for the Red Raiders from 1977-1980. Wallace died of leukemia at the age of 27. Shaikin is one of five MVC shortstops on the list, joining Missouri State’s Jeremy Eierman, DBU’s Jimmy Glowenke, Southern Illinois’ Connor Kopach and Illinois State’s Owen Miller. The Missouri Valley Conference trails only the ACC (9) and the SEC (8) in number of players on the watch list.