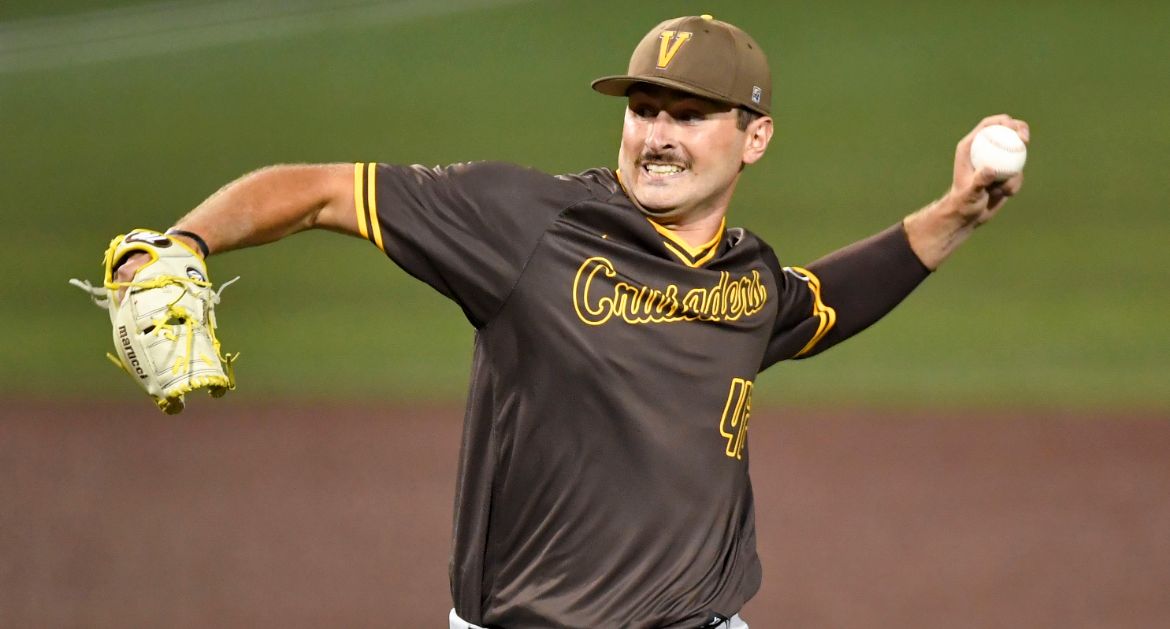 Jarrett Hammel was the winning pitcher after a strong relief outing on Wednesday.
Valparaiso at DBU | May 23, 2018

A Valparaiso University baseball team that is no stranger to winning on the big stage gained its most memorable victory yet in Wednesday’s Missouri Valley Conference Tournament opener by upstaging host DBU 13-10 under the lights at Horner Ballpark in Dallas. The second-seeded Patriots have won three of the last four MVC Tournament titles, but Wednesday night belonged to a poised group of MVC newcomers who sure didn’t look like the tournament’s seventh seed.

An unlikely victory featured an unlikely hero as left-hander Jarrett Hammel (Brook, Ind. / South Newton [Saint Joseph’s College]), who joined Valpo this season after Division-II Saint Joseph’s closed its doors, kept a potent DBU offense at bay on a warm hitters’ night, allowing just one run on two hits in 3 2/3 innings of relief. He sent down the first 10 batters he faced.

Conversely, the Valpo offense made MVC Pitcher of the Year Trevor Conn look human, bouncing him after 3 1/3 innings before continuing their assault of Patriot pitching against quality bullpen arm after quality bullpen arm. Few if any of Valpo’s hits were cheap, as the Crusaders made solid contact throughout the night.

The Crusaders will be under the lights again on Thursday as they take on third-seeded Bradley (31-17), a team that beat Illinois State 14-2 on Wednesday. The game can be seen on ESPN+ with Scott Warmann (play-by-play) and Shane Dennis (color commentary). Links to live video and stats will be available.