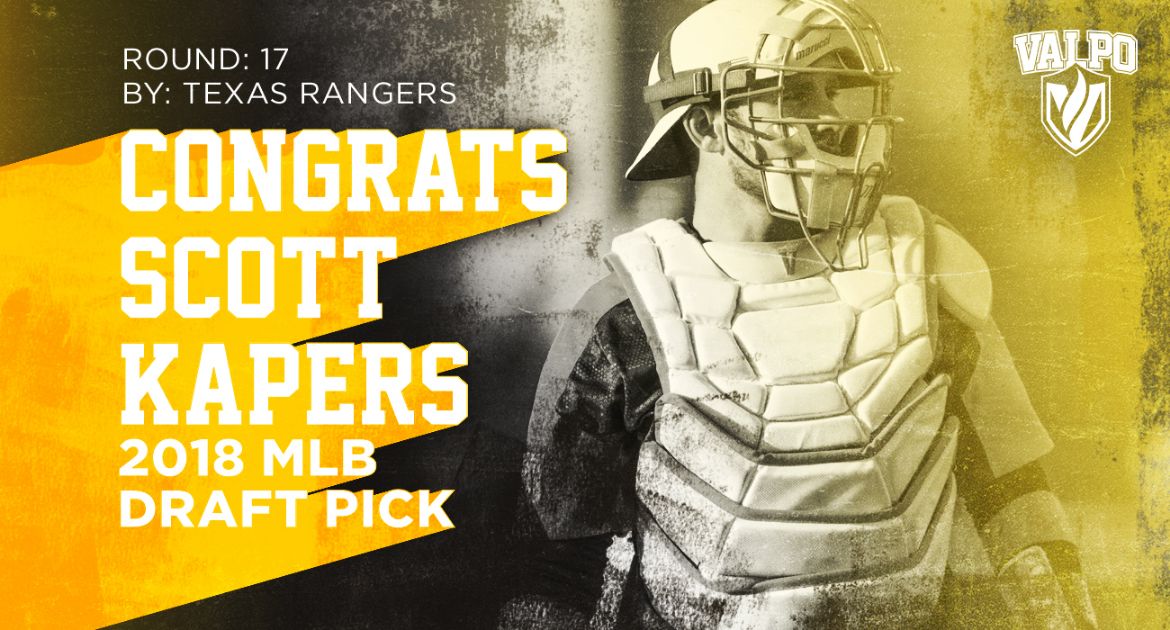 The ultimate dream of anyone who has ever stepped foot on a baseball diamond came to fruition for Valparaiso University’s Scott Kapers (Schererville, Ind. / Mount Carmel) on Wednesday.

The Valpo catcher was selected in the 17th round of the Major League Baseball First-Year Player Draft by the Texas Rangers.

“It’s a dream come true,” Kapers said. “I’m so happy that all of the hard work that I’ve put in has paid off. I’m very excited to be picked by the Rangers organization. Ever since I was a kid, from the time I was two years old hitting off a tee with my mom, I wanted to be a pro. I’m so thankful for the parents I have. Without them, I wouldn’t be where I am. The chance to play baseball professionally is all I’ve ever wanted, so there’s nothing better than getting drafted.”

Kapers hauled in several Missouri Valley Conference accolades for his performance as a junior this season, earning a place on the MVC All-Defensive Team before garnering MVC All-Tournament Team honors. He threw out 37.5 percent of would-be base stealers this season (21 caught stealing) and picked off six runners, which tied for the league lead.

In the MVC Tournament, Kapers went 4-for-12 (.333) while sustaining his strong defensive work behind the plate. He drilled a home run and drove in five over three games in Dallas. Kapers had two hits in each of Valpo’s first two games, including the team’s 13-10 victory over second-seeded Dallas Baptist, a team that eventually earned an at-large NCAA Regional berth.

“I want to thank my dad, my mom, my younger brother Jake, Coach Brian Schmack, the Valpo assistant coaches, Coach Devin DeYoung and everybody else that has helped me since I started playing baseball,” Kapers said. “I want to thank the Rangers for making this selection.”

“Any time one of your players gets their name called, it’s an exciting day,” Valpo head coach Brian Schmack said. “It’s something he’s worked for his entire life. To see all of his hard work pay off today is great. I’m extremely happy for Scott.”