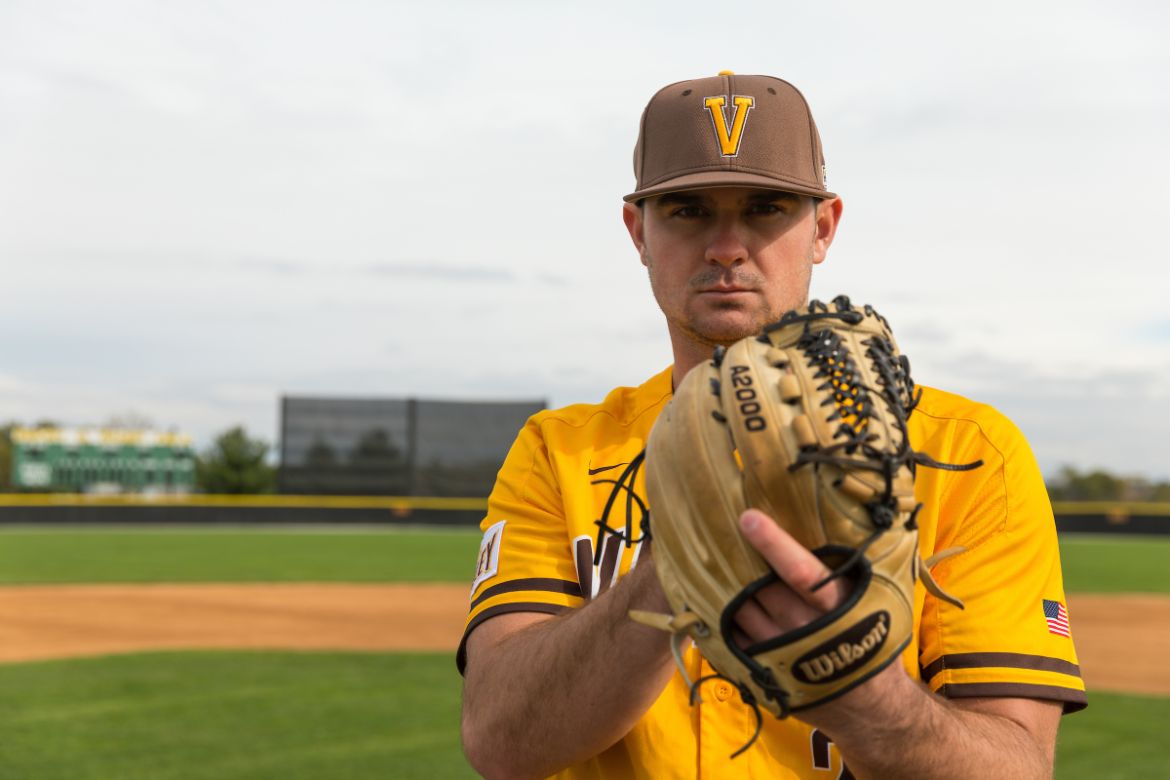 Mike Kornacker will be the Friday starting pitcher for Valpo this season.

After finishing the 2018 season with a strong tournament showing including an upset victory over host DBU, the Valparaiso University baseball team looks to take the next step forward in Year 2 in the Missouri Valley Conference.

Just as they did a year ago by accumulating four victories against teams in the Top 50 nationally in the RPI, Valpo will embrace the role of underdog in 2019. A challenging nonconference slate will give way to what figures to be another competitive season of Valley baseball as Valpo will face six opponents who appeared in NCAA Regionals last season.

The weekend rotation will feature a pair of newcomers this season, highlighted by the addition of graduate transfer Mike Kornacker (Lemont, Ill. / St. Laurence [Purdue]), who logged 20 innings and compiled a 4.95 ERA over 12 appearances out of the Boilermaker bullpen last season. An Academic All-Big Ten selection in 2017, Kornacker pitched in 12 games and made eight straight weekend starts during his redshirt sophomore season at Purdue.

Junior Jon Tieman (Crystal Lake, Ill. / Prairie Ridge) is projected as Valpo’s Saturday starter this season. After earning Freshman All-American honors in 2017, he achieved All-MVC Honorable Mention in 2018, garnering five wins while making 15 starts and one relief appearance. Tieman tossed 98 2/3 innings, the most on the team and the third most in the conference while racking up a team-high 56 strikeouts, 15th in the MVC.

True freshman Colin Fields (Libertyville, Ill. / Libertyville) has cracked the weekend rotation as the Sunday starter. He helped his high school team to two regional titles and was a two-time all-conference and all-area selection.

“Jon is doing well and his stuff looks sharp right now,” Schmack said. “He’s going to benefit from seeing the order on Friday, which should help him. Fields is a freshman who is very impressive. He doesn’t look like a freshman out there. He’ll make some mistakes, but he’s got a competitive ‘it’ factor. He is a guy who trusts his stuff and has good stuff. Our guys really like playing behind him.”

The biggest story in the bullpen is the return of redshirt junior Montana Quigley (Lake Forest, Calif. / El Toro), who missed all of last season with an injury. He was dominant in 2017, posting a team-best 1.61 ERA before having his season cut short by an injury. That was the best ERA by any Valpo player in a single season (minimum 25 innings) since 1987.

“We have so much depth out of the bullpen this year,” Schmack said. “Skidmore’s stuff has been sharp, and he’s a guy who has great stuff when he’s on. Jarecki has a big arm and good stuff. Currier has looked much improved and has made a little jump in velocity and a big jump in confidence. Hammel is a strike-thrower who we know we can trust. Fricke is a freshman with good pitch ability. Bates is a lefty who can get guys out. He has a fastball in the mid-80s with a good change and curveball. Rhodehouse has turned a corner – his velocity has ticked upward and his breaking ball is sharper.”

Shaikin, a 2018 Brooks Wallace Award Watch List member, has started all 106 games over the last two years and has appeared in 137 games and made 132 starts during his first three years on campus. Dawson, who won the Coastal Plain League batting title this past summer, has also been a fixture, playing in 151 career games and starting 147 of them.

“As a senior who has started almost every game, we’re looking for Chase to play a different role on offense this year,” Schmack said. “I’m toying with the idea of batting him third instead of leadoff. He’s a strong kid who can drive the baseball. Sam had a great year last year and is looking to build on that. He’s taken on the biggest leadership role as a senior. He’s become a little more vocal and that says something for a naturally-quiet kid.”

Shaikin will start on the left side of the infield, but it remains to be seen whether he’ll do so at shortstop or third base. He’s seen time at both positions during his career. Wherever Shaikin doesn’t play, junior Damon Jorgensen (Blair, Neb. / Blair [Coffeyville]) will. The JUCO transfer was injured much of the fall, but has impressed when healthy. Another player now healthy is Brent Jones (Ankeny, Iowa / Ankeny Centennial [Iowa Central]), a fifth-year senior who is expected to start at first base.

“Jorgensen is an athletic kid who moves well,” Schmack said. “He’s looked really good the few times we’ve been outside. Jones has great hands at first base and has been an infielder most of his life, so transitioning to first has been an easy adjustment. He’s cleaned up some things and we think he’ll have a big year for us.”

What has been the easiest position for Schmack to pencil into his lineup over the last three seasons is perhaps the toughest this year.

“Baker is probably going to start, but Jake isn’t far behind,” Schmack said. “It’s unfair to compare anyone to Scott right away. Those guys have a lot to offer in their own way. Baker throws well and will be able to hit right away. Jake is athletic and his hitting will improve the older he gets.”

Christian Barczi (Naperville, Ill. / Naperville North) will be limited to DH duties due to an injury.

Billinger will start in left field again this season.

“Blake has worked hard this year to tweak a few things in his swing,” Schmack said. “He has a chance to be even more productive than he was last year. He’ll be looked upon to be a big part of our offense this season.”

Junior Riley Dent (Long Beach, Calif. / Wilson) is expected to start in center and could see time as the leadoff hitter if Dawson moves to the middle of the order.

“Dent has matured so much both physically and mentally,” Schmack said. “He’s grown up and is taking things a lot more seriously with his daily work, and it’s showing in his performance. He is a guy who can create a little bit of havoc at the top of the order.”

“They all do certain things really well, and that gives us an advantage,” Schmack said. “Pat had a great fall and is our fastest player. Fitz is probably our best defender in that group. Drudge is a physical kid who is very raw, and Wickman is the same way and is making those adjustments to the way he is going to be pitched. I’m excited about the flexibility at that position with so many guys who can do the job.”

The season gets underway on Friday as Valpo begins a three-game weekend series at Lipscomb in Nashville, Tenn. League play commences on March 29 at DBU, while the MVC Tournament will be hosted by Illinois State from May 21-25.