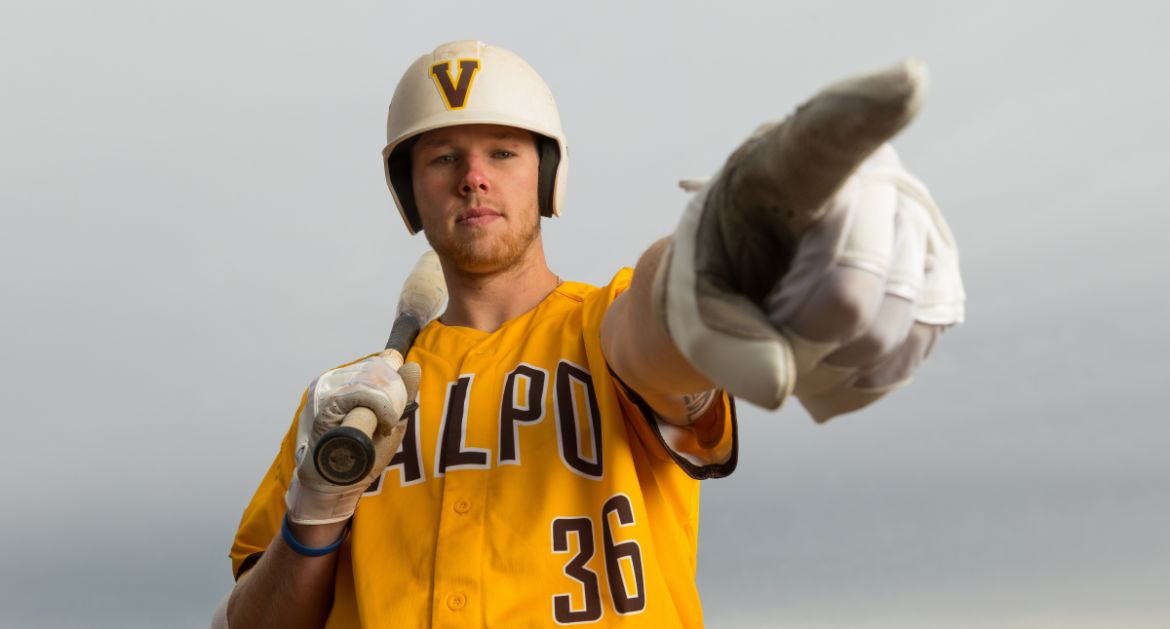 Next Up in Valpo Baseball: The Valparaiso University baseball team returns to the diamond this weekend for a three-game series in Jonesboro, Ark. against Arkansas State. The two teams were originally scheduled to play Friday through Sunday, but inclement weather caused an adjustment to the series schedule.

Baseball’s Back Alright: Valpo bounced back from a 6-0 loss on Opening Day against Lipscomb by scoring two runs in each of the first four innings to garner an 8-6 victory in the second game of the series on Saturday. Starter Jon Tieman was the winning pitcher (5 IP, 6 H, 3 R, 2 BB, 3 SO), while Jim Jarecki came in and nailed down the save. Riley Dent accrued three hits and three RBIs, while Blake Billinger also enjoyed a multi-hit output.

On the Air: The games on Friday and Sunday will have video available on a subscription basis via Arkansas State Athletics. Audio is available for all three games in the series. Links to live coverage can be found on ValpoAthletics.com.

Follow Me, Everything is Alright: Valpo has a new leadoff man this season as junior Riley Dent takes over the role of setting the table atop the starting nine. Dent batted first just once in his first two seasons on campus, but filled that role in both games last weekend. After batting just .209 a year ago, Dent had a major coming out party to begin his junior season by posting a team-best .429 average in a season-opening series at Lipscomb. Dent also drew two walks, bolstering his team-leading OBP to .556. The bulk of his damage came on Saturday, when he was the driving force behind an 8-6 win over the Bisons. He matched a career high with three hits while establishing a new personal best with three RBIs. Dent either drove in a run, scored a run or both in each of the first three innings of the game, helping Valpo score two runs in each frame. He also clubbed a double for his first extra-base hit of the season.

What’s My Age Again?: Several freshmen looked like poised veterans in their Valpo debuts last weekend. A pair of rookie bullpen arms served as bright spots in Valpo’s 6-0 loss at Lipscomb on Feb. 15. Zach Fricke heaved two scoreless innings and fanned three before Keegan Bates sent down three of the four men he faced and did not yield a hit. Another true freshman impressed on Sunday as Colin Fields threw two strong innings and struck out three. However, since the game was rained out before the fifth inning, Fields’ stats were wiped out and his start this weekend will technically be his collegiate debut. Fields is the first Valpo player to begin his freshman season in the weekend rotation since Mario Losi in 2014.

Coming out of my cage, and I’ve been doing just fine: Purdue graduate transfer Mike Kornacker got the nod on Opening Day against Lipscomb, permitting just one hit over 4 2/3 innings. In the process, he became the first player to make his Valpo debut as an Opening Day starting pitcher since Bryce Shafer got the nod as a true freshman on Feb. 23, 2008 against Austin Peay.

Ain’t Nothing But a Heartache: Mother Nature provides plenty of heartache for baseball teams in the Midwest, and this season she wasted no time reminding Valpo of her undefeated record. It only took until Game 3 of 2019 for Valpo to have its first rainout of the year as play was halted in the third inning on Sunday in Nashville. This marked the first time Valpo's season-opening series was cut short by rain since 2009, when the finale of a three-game set at Morehead State was washed out.

I’m thumbing my way into North Caroline: After this weekend, Valpo begins a brutal stretch of eight straight games against teams that played in NCAA Regionals last season. The first four games of that journey will be in the state of North Carolina as Valpo visits UNC Wilmington for a three-game set followed by a midweek battle with North Carolina A&T.

Double the Triples: Two Valpo players lashed triples in last Saturday's 8-6 victory over Lipscomb, making it the first time the team had multiple triples in a game since May 21, 2016 vs. Youngstown State (James Stea, Nolan Lodden, Jeff Edwards). Senior Blake Billinger's triple was the first of his Valpo career, while senior Chase Dawson entered the Top 10 in program history for career triples with his ninth.

Same Faces, New Places: Chase Dawson remained a staple in the lineup this past weekend, playing in his 153rd career game and making his 149th career start on Saturday. However, he batted third for the first times in his career on Friday and Saturday after previously hitting first, second and ninth. Another Valpo staple is Sam Shaikin, who has started all 108 games since the start of the 2017 season. He played third base in both games against Lipscomb, not an entirely new position, but one that he hadn't played since March 7, 2018. He started at shortstop for the final 41 games last season.

Country Roads, Take Me Home: The Valpo baseball program is no stranger to hitting the road, and the team is embracing that challenge again this season. The first 17 scheduled games of the year are away from Emory G. Bauer Field and Valpo is slated to play just 26 percent of its schedule at home in 2019.

Thanks for the Memories: Despite a 19-34 overall record and 6-15 MVC mark, Valpo’s first season in The Valley was filled with numerous accomplishments, unforgettable games and noteworthy achievements.

In The Other Dugout: Arkansas State