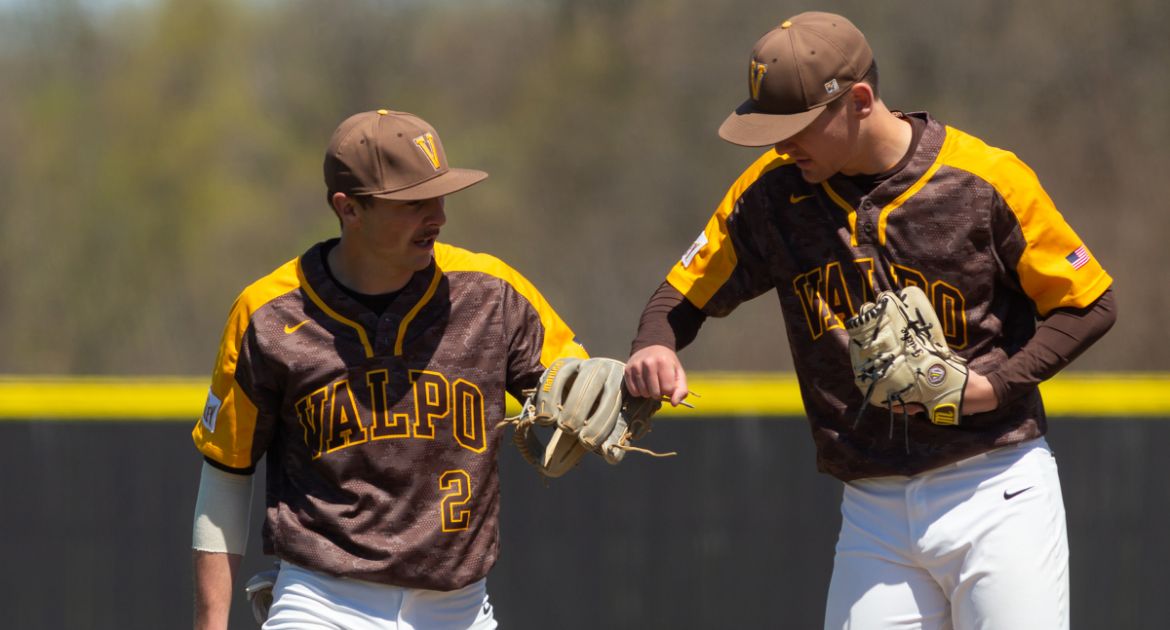 Next Up in Valpo Baseball: After back-to-back midweek rainouts at Chicago State and Western Michigan, the Valparaiso University baseball team is ready to return to the diamond this weekend in Peoria. It’s time to turn the page to the month of May as a three-game Missouri Valley Conference set against Bradley looms. All three games are slated to start at high noon at Dozer Park.

Last Time Out: Valpo is coming off a doubleheader split with Evansville on Sunday at Emory G. Bauer Field as quality starting pitching was on display throughout the day for the hosts. Zach Fricke picked up his first career win by going 6 2/3 quality innings (4 H, 2 R, 5 BB, 3 SO) in Game 1 of the twinbill as Valpo topped the Purple Aces 6-2. In Game 2, Jarrett Hammel got no decision in his first start of the season after allowing one run on five hits in six frames as Evansville eventually prevailed 4-2.

On the Air: All three games of the series will be broadcast on ESPN+, which is available on a subscription basis for $4.99 per month. Links to live video and stats can be found on ValpoAthletics.com. In addition, follow @ValpoBaseball on Twitter for in-game updates.

Series Notes: Valpo holds a 12-16 record against Bradley since the two teams started playing each other in 1991. The Braves won 11-9 last season in a Missouri Valley Conference Tournament game that went deep into the night and ended in the early hours of Friday morning in Dallas. Valpo dropped two of three in the regular season series in Valpo, but the win was a memorable one as Zack Leone drilled a walk-off home run in the 10th inning for a 5-2 victory. This will be the first time Valpo has visited Bradley since 2008.

Hats Off to the Hurlers: The Valpo pitching staff had a good day on Sunday, paving the way for a doubleheader split with Evansville. Head coach Brian Schmack received two quality starts in one day. In the opener, Zach Fricke limited the Purple Aces to two runs on four hits (all singles) in 6 2/3 innings to pick up his first career win, while Jarrett Hammel allowed just one run on five hits and one walk in six innings while receiving no decision in his first career start in the second game. Montana Quigley earned his third save in the opener and has not allowed a run over any of his last four outings spanning 6 1/3 innings. Easton Rhodehouse worked two clean innings out of the bullpen in the nightcap.

Big Weekends: Valpo received quality offensive showings from the No. 7 and No. 8 spots in the batting order as Jeremy Drudge and Damon Jorgensen were the team’s top two hitters in terms of batting average in the weekend series against Evansville. Drudge slugged .545 for the series to go along with a .455 batting average. He had three of the team’s four hits in the series opener against the Purple Aces and has more hits in his last five games (seven) than he did in his first 19 games (five). Jorgensen turned in a .333 average for the series.

Double the Fun: When head coach Brian Schmack announced his team’s schedule in November, there was only one doubleheader on the slate. However, doubleheaders have become the norm rather than the exception for Valpo as this past weekend’s twin bill with Evansville marked the team’s ninth of the year. The team also opened the season with a set at Lipscomb that was shortened to two games due to rain, so the only series all year that has been the scheduled Friday-Saturday-Sunday was March 29-31 at DBU. The seemingly inordinate number of twinbills does have a recent precedent as Valpo also played nine doubleheaders in 2017. However, the majority of those were scheduled due to a seven-team Horizon League double-round robin format where teams played five games against each league opponent.

Billinger Bombs in Bunches: They say home runs come in bunches, and that’s proved to be the case for a pair of Valpo power bats over the last two weeks. After Sam Shaikin launched four home runs in a five-game span to usurp Blake Billinger for the team lead in dingers, Billinger put together a four-game stretch from April 16-20 during which he launched four home runs to take the team lead right back. By blasting three home runs in a doubleheader including his third career multi-homer game on April 20 at SIU Edwardsville, Billinger bolstered his home run total to nine and at that time took over the Missouri Valley Conference lead. He has 16 career home runs in only his second season at Valpo after joining the program as a junior college transfer.

In The Other Dugout: Bradley Braves