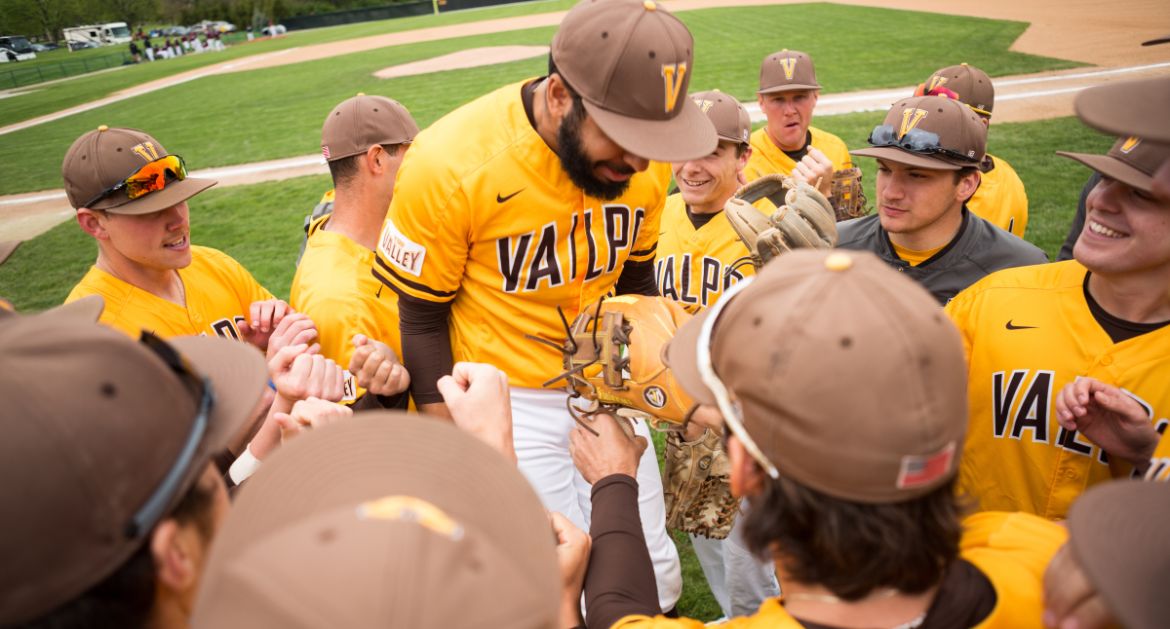 Next Up in Valpo Baseball: After matching its regular season Missouri Valley Conference win total from a year ago despite playing in a conference that entered the final weekend of the regular season ranked sixth nationally in RPI, the Valparaiso University baseball team will look to make some noise in the Valley tournament much like it did a year ago. Valpo finished seventh in the regular season standings, creating a matchup with sixth-seeded Missouri State, the defending conference champion, in a single-elimination first-round game on Tuesday.

Last Time Out: Valpo will open the tournament against the same team it played to close out the regular season. Valpo dropped all three games at Hammons Field despite leading in Games 1 and 3. The Bears garnered a one-run, 5-4 win in the series opener thanks to a four-run fifth. Valpo dropped the middle game 11-4, then took a 6-4 lead into the eighth inning of the series finale but gave up two in the eighth and two in the ninth to fall 8-6. Chase Dawson and Blake Billinger, the team’s top two hitters for the season, tied for the team lead in batting average in the series by both going 4-for-12 (.333) in the three games in Springfield. Including a midweek game against Chicago State, freshman catcher Jake Kapers led the team in batting average last week by hitting .357 over four games.

Familiar Foe: Valpo faced a similar situation in the 2014 Horizon League Tournament in Mequon, Wis. After sweeping Youngstown State to close out the regular season, Valpo opened the Horizon League Tournament against the Penguins and lost 7-3. Valpo has hopes of being on the other end of that in 2019 by reversing its fortunes from a sweep at the paws of the Bears this past weekend.

Tournament History: In only its second season in The Valley in 2019, Valpo made an immediate splash in the MVC Tournament a year ago by upsetting DBU 13-10 in the tournament opener. The Patriots were the MVC regular season runners-up and went on to earn an at-large bid to the NCAA Tournament. After falling to Bradley 11-9 in a game that ended at 1:32 a.m., Valpo had DBU on the ropes with a 5-0 lead only to fall to the Patriots 7-5 in an elimination game. Before joining the Valley, Valpo won the league tournament or finished as the runner-up in four of its final seven seasons in the Horizon League. Valpo’s most recent NCAA Regional berth was in 2013, when it won the Horizon League’s automatic berth for the second straight season.

Series Notes – Missouri State: Valpo will look to pick up its first win over Missouri State on Tuesday as the Bears lead 8-0 in a matchup that began in 1985 but had been on hold since 1987 until a three-game series at Emory G. Bauer Field last year. The 1985 meeting was part of the Association of Mid-Continent Universities Tournament in Charleston, Ill., while the 1987 matchup was part of the same event in Chicago. This past weekend, Valpo made its first ever trip to Springfield. The Bears are the only team in the conference that Valpo has never beaten.

Tieman Time: For the second straight season, right-hander Jon Tieman gets the ball from head coach Brian Schmack for the tournament opener. The junior received no decision in his first MVC Tournament start, an eventual 13-10 win over DBU. He allowed six runs on eight hits and four walks in four innings. However, a return to Duffy Bass Field brings back fonder memories as this was the site of Tieman’s 132-pitch complete game on May 11, 2018, when he yielded just one run on eight hits and two walks to lift his team to a 2-1 victory. Valpo centerfielder Jayden Eggimann made a diving catch for the final out in the bottom of the ninth. Tuesday’s game against Missouri State is expected to be a rematch of the series opener this past Thursday in Springfield. Logan Wiley got the win for the Bears by limiting Valpo to three runs on four hits and one walk while striking out eight in 5 2/3 innings. Tieman was saddled with the defeat after allowing five runs on four hits and four walks in 4 2/3 innings.

Bringing Out The Brooms: Valpo’s three wins over Southern Illinois from May 10-12 allowed the team to string together three straight victories for the first time this season and record its first ever sweep in Missouri Valley Conference play. It marked Valpo’s second series win (2018 at Evansville) since joining The Valley prior to the start of the 2018 season and first at Emory G. Bauer Field. In addition, it was Valpo’s first series win since March 16-17 at Northern Illinois and the team’s second series win of the season. The victories allowed Valpo to lift its Valley win total to six, matching its conference win total from a year ago. That marked Valpo’s first three-game series sweep since May 19-21, 2016 vs. Youngstown State. Valpo tacked on its fourth straight win on May 14 vs. Chicago State to make it the team’s longest winning streak since securing six straight victories late in 2016.