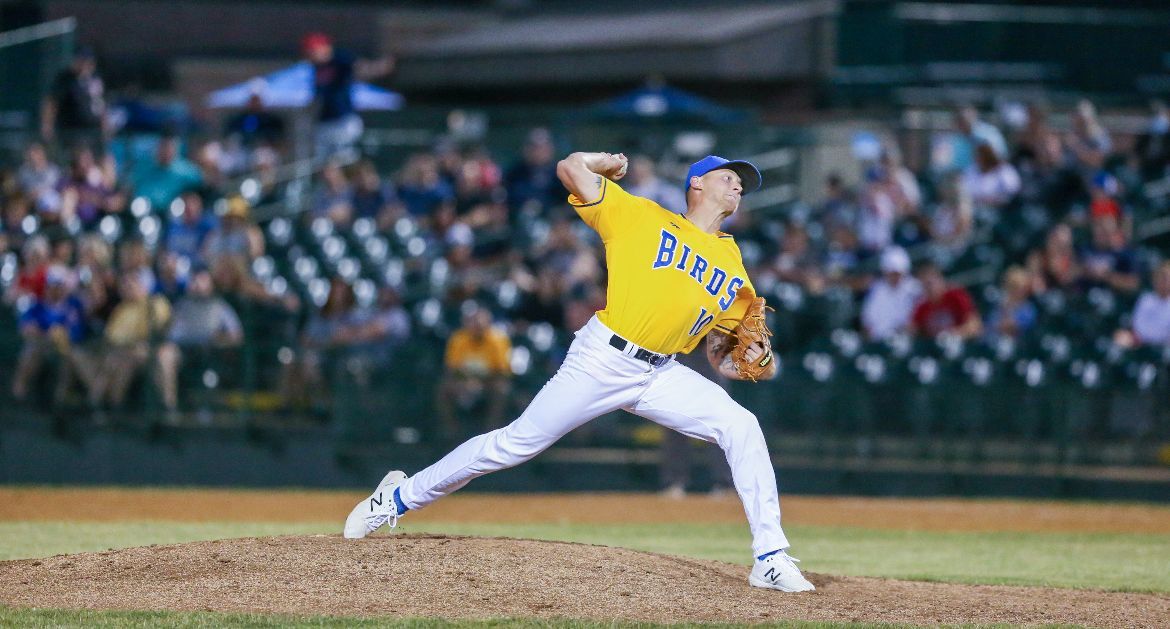 When he finished out his collegiate baseball career at Valparaiso University in 2016, pitcher Ryan Fritze thought his playing days were done.

However, staying in shape for a Valpo Baseball Alumni Game in the fall of 2016 paid dividends for Fritze, who is now in his fourth season of professional baseball and has made 112 professional appearances in the independent and affiliated ranks.

“After 2016, I didn’t get drafted and there weren’t any opportunities presented to play, so I decided to hang up the cleats and be done playing,” said Fritze, who is currently a member of the Sioux Fall Canaries of the American Association. “It was not your typical route into pro ball. I took almost a year off where I thought I was done playing. It definitely worked out, and I wouldn’t trade the experience for anything.”

Fritze came back to Valpo in the fall of 2016, where he began a two-year stint of serving as a graduate assistant on the Valpo baseball staff while completing his master’s in sports administration. Head coach Brian Schmack received a phone call from a member of the Gary RailCats coaching staff, and Schmack provided Fritze’s name as someone who was in shape since Fritze had been throwing in preparation for the alumni game. From there, the right-hander threw a bullpen for RailCats manager Greg Tagert in October, received a spring training invitation and eventually made the team, setting the wheels in motion for a playing career that is still going strong.

Fritze is back in the American Association this summer, competing in his second stint with Sioux Falls, where he also pitched in 2018 after one season with Gary. Six of the 12 American Association teams are operational this season with the other six sitting out due to the COVID-19 pandemic. Fritze boasts a 3.10 earned run average in 20 relief appearances while holding a 2-0 record, nailing down two saves and striking out 21 over 20 1/3 innings.

“It’s nice to know that I’m going to be the seventh or eighth inning guy,” Fritze said. “I come into a clean inning and can give our team a chance to win. I’m trying to pitch to my strengths, whether I’m facing the best hitter or worst hitter in the opposing lineup. That’s been the biggest difference this year – knowing what I’m good at and trying to pitch to my advantage.”

The return to Sioux Falls came after spending the 2019 campaign playing affiliated minor league ball in the Arizona Diamondbacks organization. Fritze reached as high as Class-A Advanced, where he appeared in 10 games for the Visalia Rawhide of the California League. He compiled a 1.62 ERA over seven games with the Kane County Cougars of the Midwest League and nailed down five saves in 14 appearances for the Missoula Osprey, a Rookie League affiliate in Montana.

“I was expected to go back to Sioux Falls in 2019, but I got a call on March 11 that the Diamondbacks had purchased my contract,” Fritze said. “I flew down to Phoenix and drove into Scottsdale for the remainder of spring training. I was thrown into the fire after not having experienced a spring training like that before. I bounced around a lot, making seven or eight team changes throughout the year, filling spots up and down the system. It was a good experience.”

Fritze’s time playing in Valpo’s program helped shape his eventual professional career. After two junior college seasons at Des Moines Area CC, he was a part of Valpo’s starting staff in 2015. After the third start of his senior season in 2016, Schmack moved Fritze to the bullpen. The Woodbury, Minn. native was not in favor of the decision at first, but it proved to be one that altered his career for the better.

“That wasn’t something I wanted to do initially, but I’m glad it happened because it showed me I could excel in a relief role,” Fritze said. “I learned about myself that season and came to realize that I’m better as a one or two inning reliever rather than trying to go five plus. The coaching staff at Valpo helped with my mental game as they taught me how to be positive and play for the team. They’re all extremely competitive and hate losing, and so do I, so that brought out a fiery side of me, which I still use today when I take the mound.”

When he finished his undergraduate degree in sports management, Fritze’s time on campus wasn’t done yet. His return for the two additional seasons as a graduate assistant and to earn his master’s proved pivotal in his personal growth.

“I gained so much experience when I came back as a coach,” Fritze said. “I learned what it takes to be a better player, better coach and better person. That has helped me incredibly to get where I am today. Without those two years getting my master’s degree at Valpo, I don’t think I’d have this chance to still be pitching professionally. By stepping away from the players’ side, I experienced a lot of growth and development.”

The ultimate goal of any independent league player is a return to the affiliated ranks, but for now Fritze is focused on soaking up the chance to take the mound and help his team win during a season where so many players are without a place to play due to the COVID-19 pandemic.

“I’m fortunate that my team happened to be one of those still playing,” he said. “The talent is a lot higher this year since only six of the 12 teams are playing; it’s the best of the best in this league. I’m lucky to have the opportunity to take the field each night against quality competition.”