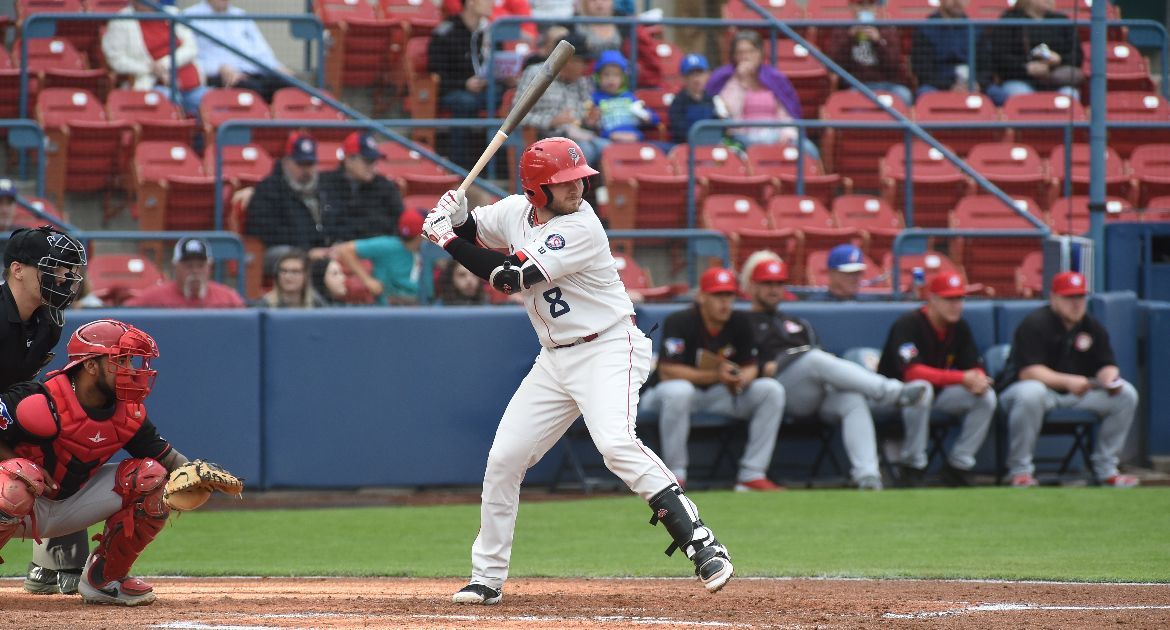 Like everything else for everyone in the country and across the world, baseball looks a little different this year for former Valparaiso University standout Scott Kapers.

The Texas Rangers minor league catcher was unable to compete in a third season of affiliated professional baseball in 2020 since the minor league campaign was cancelled due to the COVID-19 pandemic. However, Kapers has found ways to continue his development and is currently competing for the Westside Woolly Mammoths of the United Shore Professional Baseball League.

“I arrived in Arizona on Feb. 7, and was there until March 16,” Kapers said. “After COVID shut spring training down, I went straight home and spent several months doing my best to stay active. It was challenging to stay on a diet and find fields to practice. I was fortunate to have my brother (current Valpo junior) Jake to throw to and work out with throughout the whole process.”

Kapers eventually latched on with the semipro Mishawaka Brewers to stay sharp before recently making his way to Utica, Mich. to play in the USPBL. All four teams competing in the league this season play their games at one site, Jimmy John’s Field. Kapers is living with fellow Rangers minor leaguer Jake Hoover, who is also playing in the USPBL.

“The Rangers organization has been unbelievable, paying us through all this and doing everything they can to help their minor league players,” Kapers said. “It’s been great to be here in Michigan and have the opportunity to log some innings behind the plate while facing quality pitching. This league does a great job with data collection, so I’ve been learning more of the statistic side and educating myself on what each pitcher throws for strikes and other information.”

The stop in Michigan is the latest chapter in a professional career that began when Kapers was selected in the 17th round of the 2018 draft by the Rangers following his junior year at Valpo. He played in 54 games over the last two seasons, with the majority of those coming for the Spokane Indians of the Class-A Northwest League. The Schererville, Ind. native and Mount Carmel High School product had the opportunity to play one game with the Nashville Sounds of the Triple-A Pacific Coast League last season.

“I woke up one day and they said, ‘You’re going to Triple-A,’” Kapers said. “We had a Triple-A catcher get injured and I was available at extended spring training. I was catching bullpens and doing my job while getting work in. The night before my last day with Nashville, they let me know I was playing the next day. I actually slept pretty well and got to the field and played; I treated it just like any other baseball game.”

In his final season at Valpo in the spring of 2018, Kapers threw out 37.5 percent of would-be base stealers (21 caught stealing) and picked off six runners. He garnered Missouri Valley Conference All-Defensive Team and All-Tournament Team accolades while learning from head coach Brian Schmack and his staff.

“Coach Schmack knew what it took since he played in the big leagues,” Kapers said. “He helped me straighten out my mindset and focus on what I wanted to be as a player. The team camaraderie at Valpo stands out. Learning how to be a good teammate in college has helped me in my professional career.”

Valpo is a family affair for Kapers, as his sister Madison recently graduated from the University and is now in dental school in Arizona, while his aforementioned brother Jake is entering his third season as a catcher for the Valpo baseball team.

“Everyone at Valpo has treated our family extremely well,” Kapers said. “The community is enjoyable and it’s a nice town. The academics are elite and walking away with a Valparaiso education is very beneficial. My parents recognized that value and were supportive of us in our decisions to attend the University.”

Click here to read about one of Valpo's other active pros, Ryan Fritze.