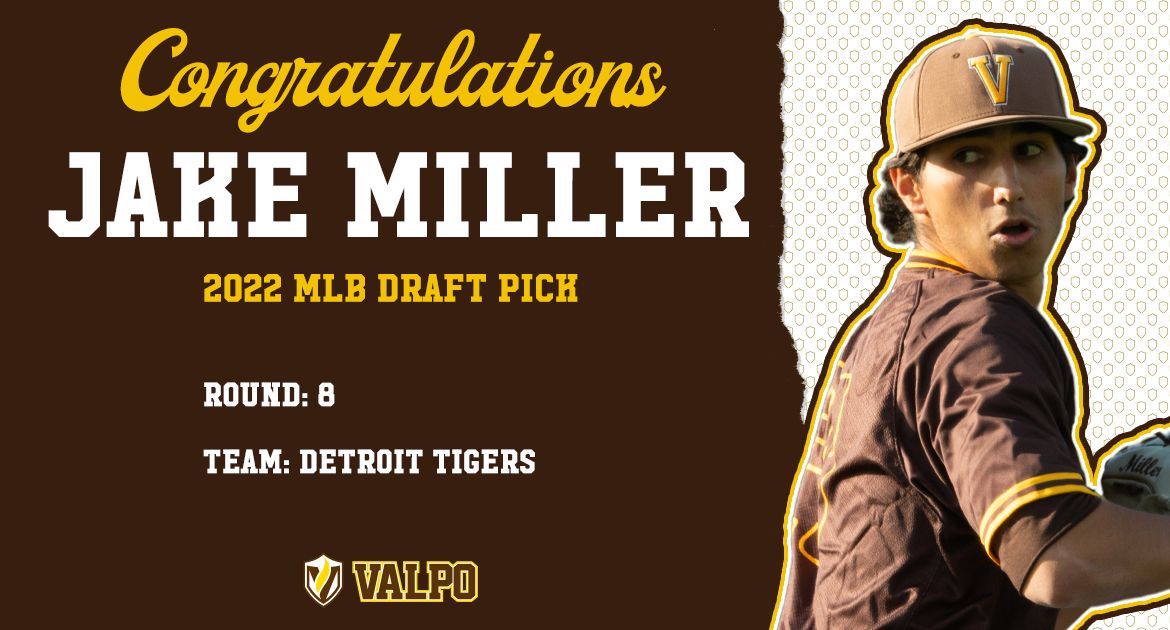 Miller received the news that every child who grows up playing America’s pastime dreams of hearing as he was selected by the Detroit Tigers in the eighth round with the 237th overall pick in the 2022 Major League Baseball Draft.

“At first, I was at a loss for words,” Miller said. “I got thinking about how far I’ve come since I was a little kid and how much I’ve loved this sport. I’ve dealt with adversity and learned how that makes you better and tougher. I had a lot of confidence that I would make it here, and now I’m finally here. Right before the pick, I got the news that I was going to be a Tiger. My whole family is here with me in New York. It’s exciting stuff.”

The adversity Miller alluded to came first in the form of an injury that cost him the 2020 season, then in the form of logging just 10 2/3 innings in 2021. The 2022 campaign was a special one for Miller, who earned a job in head coach Brian Schmack’s weekend rotation. A conversation between Schmack and Miller at the end of the 2021 campaign was the beginning of Miller’s turnaround.

“The exit meeting that I had with Coach Schmack is something that will stick with me forever,” Miller said. “He had confidence in me. He sent me off to summer ball with expectations that I need to start believing in myself. During the summer, I was able to get more innings and figure things out. I came back into school ball with confidence and had that determination to earn everything that came to me. I put a lot of work into becoming a starter and holding that starting role the entire year. Coach Schmack believed in me, and that made me believe in myself.”

Miller became Valpo’s first draft choice since catcher Scott Kapers was selected in the 17th round of the 2018 draft by the Texas Rangers. Miller is Valpo’s highest draft choice since 2010, when Kyle Gaedele went to the San Diego Padres in the sixth round. The New York native was the first Missouri Valley Conference pitcher taken in this year’s draft.

“I’m happy for Jake; this is something he’s always wanted,” Schmack said. “We always like to see players realize their dreams. He’s worked for it. This shows that you can accomplish your goals here at Valpo. Good things will happen if you’re good enough and you put in the time. He’s made improvements in terms of strength as well as tightening up his breaking ball. He’s worked to get to this point, and it’s led to this moment.”

Miller posted a 6-2 record in 2022, his first year as a weekend starter for the Beacons. He became the first Valpo pitcher to win six games in a season since Dalton Lundeen in 2016. He logged 61 1/3 innings and struck out 75 while issuing just 17 walks. He ranked 15th in the MVC in innings pitched, eighth in strikeouts and tied for fifth in walks. In addition, he ranked fourth in the league in strikeout-to-walk ratio at 4.41 and fourth in strikeouts per nine innings at 11.01. Miller notched a career-high 11 strikeouts over seven innings of two-run ball on April 3 at UIC. The southpaw made 11 relief appearances in 2021 before 11 of his 12 outings came in a starting role this season.

In the hours after Monday’s draft selection came across the wire, Miller’s phone was hit with a flood of text messages and phone calls.

“It goes to show my support system,” Miller said. “Pretty much everyone on our team reached out. I also heard from players who I’ve played summer ball with and friends from back home. It puts a smile on my face that so many people care about me and want to see me do well in my career. I’m very thankful for them.”

On Wednesday, Miller will fly to the Tigers’ Spring Training complex in Lakeland, Fla., where he is expected to receive his contract, get a physical and receive a tour of the facilities.

Schmack pitched in the Tigers organization, reaching the big leagues in 2003. Miller becomes the third Valpo player selected by the Tigers in the last 12 years, joining Dalton Lundeen (2016, 30th) and Bo McClendon (2010, 39th).

“Over the past few days, I’ve been reflecting on my time at Valpo,” Miller said. “For some, college is a pit stop in their career before they make it to the major leagues. For me, Valpo is a second home. I care about that place so much. I’ve met my best friends for life there. It will always have a place in my heart. I expect to continue to visit there and go back there. It’s a second home for me and I’m forever grateful that I chose Valpo. It’s the best decision I’ve ever made.”