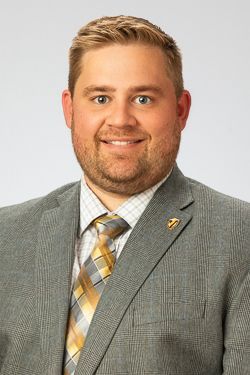 Chris Limbach completed his third season as the offensive coordinator and quarterbacks coach at Valpo in Fall 2021.

Limbach was part of a Valpo coaching staff that led the team to its second straight season with a Pioneer Football League record of .500 or better during the Fall 2021 campaign. That marked the first time Valpo had achieved that feat in consecutive seasons since 1999 and 2000. The Beacons won four Pioneer Football League games in the same season for just the third time ever (2017 and Spring 2021) and four league games in any conference for just the third time since 1968.

During the Nov. 6 game vs. Presbyterian and the Nov. 13 game vs. Butler, Valpo totaled 112 points in a two-game span, tying the 2017 squad (vs. Marist, vs. Morehead State) for the program’s most points over two games since 1985. The team’s 65 points in the win over Presbyterian marked its highest single-game scoring output since 1996 and the fifth-highest single-game scoring output in program history.

Valpo scored 298 points during the Fall 2021 campaign, the fifth most in program history. The team rushed for 23 touchdowns, the third most in the program record book and most since 1971. Valpo’s eight rushing TDs vs. Presbyterian shattered a single-game program record. In addition, Valpo finished the season as the only team in FCS and one of four teams in all of Division-I college football (joining Army West Point, Oklahoma State and Michigan) with eight rushing TDs in a single game. Robert Washington became the third 1,000-yard rusher in program history and finished the season with 1,105 rushing yards, second in Valpo lore. He finished in the top 10 nationally in FCS in rushing yards per game and total rushing yards while tying the program record for single-season rushing TDs with 14. Washington ranks ninth in program history in career rushing yards with 1,758 despite having played just 17 games at Valpo.

Washington rushed for 234 yards vs. Presbyterian, the most by a Valpo player in a single game since 2012. He received national attention for that performance, earning a “Helmet Sticker” on ESPN’s College Football Final. In addition, Nick Orekoya’s four rushing TDs vs. Presbyterian tied a program record.

Limbach’s Spring 2021 offense also featured running back Robert Washington, who ranked eighth nationally in FCS in rushing yards per game (108.8) on his way to becoming the first Pioneer Football League Offensive Player of the Year in program history. A unanimous First Team All-PFL choice, Washington had four 100-yard rushing performances in the six-game slate including 199 yards in the season opener against Butler, the ninth-highest single-game rushing output in the FCS nation in Spring 2021.

Valpo eclipsed 150 rushing yards per game for the second time in a 12-year span and the first time since 2014 in Spring 2021. Limbach’s offense outrushed opponents 910-668, its first time gaining more yards on the ground than its opponents since 2007. In addition to boasting Washington on the All-PFL First Team, Limbach’s offense had one All-PFL Honorable Mention (offensive lineman Aaron Byrd), one Academic All-PFL First Team (Drew Parrish) and one Academic All-PFL Second Team (Byrd).

Limbach made his way to Northwest Indiana after a stint as the offensive coordinator, assistant head coach and quarterbacks coach at Edinboro University that began in 2016. In his first season, he helped the Fighting Scots go from 0-11 the year prior to 9-2, the biggest turnaround in NCAA Division-II history. His first Edinboro offense set a school record by scoring 40+ points in seven games including two performances of 60 points or more. The team ranked 10th nationally in scoring offense at 41.5 points per game and set school records for points scored (457), yards passing (3,789), pass attempts (549), pass completions (303), touchdown passes (42), scoring offense and total offense per game (433.2).