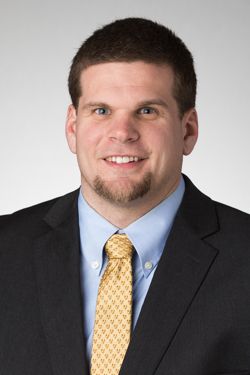 Jon Robinson is entering his third year on the Valpo coaching staff in Fall 2021, serving as the team’s linebackers coach and special teams coordinator.

Robinson’s special teams unit had a banner season in Spring 2021, led by co-PFL Special Teams Player of the Year Ben Niesner, the first player in program history to earn that award. Also a semifinalist for FCS National Punter of the Year, Niesner tied school and league records for single-season punting average. In addition, kicker Brian Bartholomew posted the league’s best field-goal percentage at 87.5 and had the most PATs without a miss in the league, going a perfect 13-for-13. Bartholomew registered the program’s best single-season field-goal percentage in over 15 years.

Freshman Charlie Maxwell finished his Spring 2021 season as the FCS national leader in kickoff return average at 29.8 yards per return. He had an 86-yard kickoff return for a touchdown in the season finale against San Diego, the second-longest return by any PFL player in Spring 2021. Four members of Robinson’s specialist group earned All-PFL honors with Niesner and Bartholomew on the first team, Maxwell on the second team and long snapper Doug Haugh receiving honorable mention. Maxwell was also named a Freshman All-American by HERO Sports, while Drew Gedrys became the third player in the FCS nation with multiple blocked kicks in a single game by turning away a pair of PAT tries in a Week 6, one-point victory over San Diego.

Robinson’s linebacking corps also hauled in league accolades in Spring 2021 as Jaxon Peifer earned All-PFL First Team recognition with Evan Annis garnering a spot on the second team. With Robinson serving as linebackers coach, the team enjoyed its best defensive season in four decades in Spring 2021. Valpo held opponents to 283.3 yards per game, the program’s best total defense in the last 40 years. Valpo limited the opposition to 172.2 passing yards per game, the program’s best passing defense since 2008. In addition, the squad boasted its best rushing defense (111.2 yards per game) and scoring defense (18.7 points per game) since 1999.

Robinson’s 2019 special teams unit featured kicker Dimitrios Latsonas, who finished fourth in school history in career scoring with 180 points. He also established the Valpo record for career extra points with 93 and made the most career field goals of any Valpo kicker since the program joined the PFL in 2003. Latsonas also cracked the Top 10 in PFL history in career field goals made with 29, tied for ninth on the league list.

The group of specialists also featured punter Benjamin Niesner, who averaged 39.4 yards per punt over 65 punts, the best mark by a Valpo punter with at least 20 attempts since Greg Wood’s 40.9 average in 2012. Valpo ranked in the Top 5 in the conference in punting average (34.7, t-fifth) and in kickoff return yards per game (21.0, fourth).

Ollie Reese played a key role in that kickoff return game, including a 95-yard kickoff return for a touchdown that was the second-longest in the PFL in 2019. Jamari Booker also blocked a punt and returned it for a touchdown. Booker’s punt return touchdown was the 25th in program history, while Reese became just the eighth different player in program history with at least one kickoff return touchdown. Valpo also blocked five kicks in 2019, as many as the previous three seasons combined. The five blocked kicks marked Valpo’s highest total since 2014.

As linebackers coach, Robinson instructed fifth-year senior Nick Turner in 2019 on his way to All-PFL Honorable Mention and Academic All-PFL Second Team honors. Turner finished third in the PFL with 11.5 TFL. Robinson was part of a defensive staff that helped Valpo finish in the Top 5 in the PFL in scoring defense, total defense, rushing defense and passing defense all in the same season for the first time in over 19 years.

Robinson took on his role as the linebackers coach and special teams coordinator at Valpo after holding those same positions at Wayne State University in Detroit from 2016-2018. There he coached two all-conference players in 2016 and one in both 2017 and 2018 and was an instrumental part of a defense that ranked second in the GLIAC in 2016.