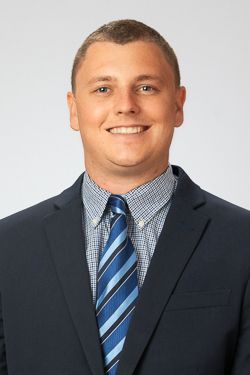 Shane Heston is entering his second season as Valpo recruiting coordinator in Fall 2021.

Heston joined Landon Fox’s staff for the 2020-2021 campaign after previously serving as the recruiting coordinator and wide receivers coach at Adrian College, a role he had held since July 2019. He helped two of the team’s wide receivers finish in the top five in receiving yards per game in the conference, including one who led the conference in yards per game, yards per reception and total receiving yards.

Heston played cornerback at Olivet College from August 2012 to April 2013 before becoming a student operations manager for the Michigan State football program from March 2014 to January 2017. He graduated with a bachelor’s degree in communication arts and sciences specializing in interpersonal communication in December 2016.

What They’re Saying About Shane Heston

“Shane responds to the call of leadership with hard work and intellect. His remarks and comments are well received by the players and his peers. It is evident that Shane has distinguished himself through his leadership and superior work ethic. He has earned much respect for his willingness to go the extra mile for coaches and players.” -Dave Warner, Michigan State University Co-Offensive Coordinator

“Shane has done a really good job with the players, and additionally, he’s been doing a really great job recruiting for us.” - Adrian College Head Football Coach Jim Deere