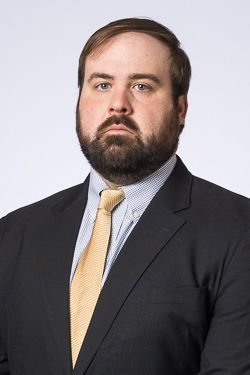 Pat Denecke completed his first season on the Valpo football coaching staff in 2022, serving as the program’s offensive line coach.

In his first season on staff, Denecke helped the team win three league road games in the same year for the first time since 1962. The Beacons went 3-1 in league road contests, the first time Valpo had won three PFL road games in the same season since the league was founded in 1993. The offense played a key role in those road victories as its 463 yards of total offense on Oct. 8 at Presbyterian was the program’s highest single-game total of the Landon Fox Era and one of three times that the 2022 squad eclipsed 400 yards of total offense, also including a 45-24 win at Marist. Denecke was part of the program’s first ever win at Marist and first win at Morehead State since 2006.

With Denecke’s offensive line paving the way, running back Aaron Dawson was named a 2022 First Team All-PFL selection after shattering a 73-year-old program record for the longest scoring run from scrimmage (99 yards vs. Butler), threatening the program’s single-game rushing record (241 yards at Morehead State) and finishing second in program history in single-season rushing yards (1,204). Dawson was one of two members of the Valpo offense selected to the 2022 FCS National Bowl, joining offensive lineman Aaron Byrd, who was also a First Team All-PFL choice. Another offensive lineman – Drew Parrish – was named to the Academic All-PFL First Team.

In Denecke’s first season on staff, the team ranked in the top five in the PFL in the following offensive categories – total offense (340.9), turnovers lost (16), passing efficiency (140.4), rushing offense (125.7, fourth), passing offense (215.2) and fewest passes had intercepted (10, fourth). The offense moved the chains for 217 first downs, the program’s most in a single season since 2014. The unit improved from the previous season in the following categories – first downs, interceptions thrown, passing offense, passing yards/completion, passing efficiency, total offense and turnovers lost. The program enjoyed its best season in terms of total offense since 2017 and had the program’s best passing offense since 2018.

Denecke came to Valpo after a stint at the University of Maine, where he was on staff from January 2016 to January 2022 and most recently served as the assistant head coach and run game coordinator. During his tenure at Maine, Denecke also spent time as the offensive line coach and tight ends coach.

Denecke helped Maine become the first FCS program to have two first-round picks in the Canadian Football League Draft in 2021. His team earned a pair of FBS wins and produced an All-American. He was on staff in 2018 when the Black Bears won the Colonial Athletic Association championship and reached the FCS Semifinals.

Prior to his tenure at Maine, Denecke was a member of the University of Nevada staff from 2013-2016. He started as a defensive graduate assistant before moving to the offensive side of the ball, where he was a graduate assistant who worked as an assistant offensive line coach. He also spent the 2015 spring season as the interim tight ends coach. In 2015, Nevada was one of two teams in FBS with two 1,000-yard rushers.

WHAT THEY’RE SAYING ABOUT COACH DENECKE

Chris Smith, Holy Cross Offensive Coordinator: “Pat is a great coach who cares a lot about his players. He’s a teacher who is also always willing to learn. We’ve gone to clinics together many times, and I’ve always learned more by being with Pat. He wants to win and he will do whatever is necessary in terms of workload to be successful. He is a thorough and innovative recruiter and developer.”

Nick Charlton, UConn Offensive Coordinator: “Coach Denecke is an outstanding mentor and one of the top offensive line coaches in the country. Pat is a creative coach who sees the big picture while being an excellent teacher for student-athletes. One of our top recruiters at Maine, Pat helped lead our program to a championship level and will certainly grow that standard at Valparaiso.”

Brian Polian, LSU Special Teams Coordinator: “Pat Denecke is a terrific football coach and a better human being. He is one of the hardest working and most detailed-oriented people I have ever worked with. More importantly, he believes in building relationships with and serving the student-athletes with whom he works. Valpo got a great coach.”